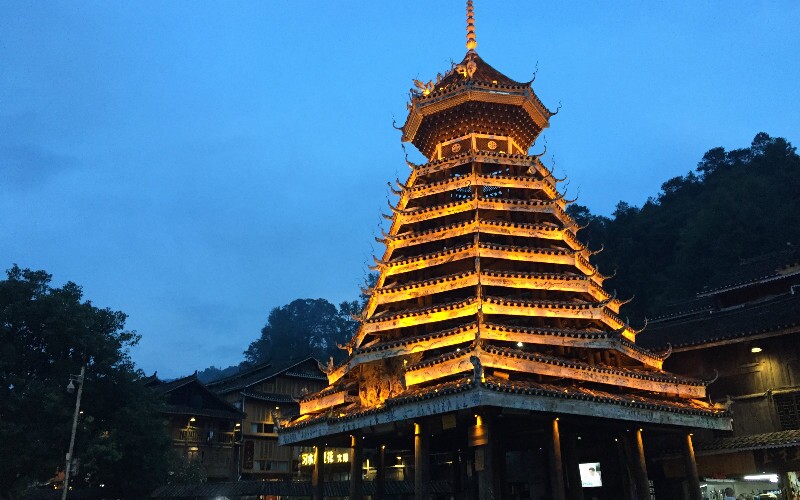 Zhaoxing is renowned for its drum towers, which are the only one of its kind in China. Therefore, it is praised as the land of drum towers.

Among the 628 drum towers in China, Liping County owns a large proportion, 328 towers. There stand five towers in one village. The five drum towers are the most famous tourist attractions in Zhaoxing. Each drum tower shows its unique own style and characteristics.

As a symbol of Dong village, Drum Towers serve as the embodiment of Dong people’s exquisite building skills and technology. The whole construction was finished without a nail or a rivet. The insides and outer of drum towers and covered bridges are often colorfully painted with scenes from Dong folk tales, legendary heroes, landscapes, animals and of activities such as ox-fighting and festive dancing. Aspects of daily life are likewise portrayed, such as playing musical instruments, hunting, spinning, weaving and dyeing, cooking. There are also carvings of dragons, snakes, tigers, geese, etc. In the past when enemies invaded, Zhaoxing villagers assembled with their weapons at the tower to await orders from the head of their clan. According to the tradition of the Dong ethnic groups, each drum tower represents one group of the local people. The head of the village divided the people into five groups in order to make administration easier. The five towers separately represent kindness, politeness, intellect, righteousness and creditworthiness.

In the village, the drum towers are the highest and the most respected buildings. During the festivals and special meetings, villagers always congregate in the lower pavilions of the tower, gathering there in the evening, dancing and listening to the traditional folk songs. Especially during the harvest period, the village is full of joyful, young people hold the festival dance surrounding the drum tower. They are honest and hospitality, and welcome the tourists to join in them.

zhaoxing Zhaoxing Travel Guide - How to Plan a Trip to Zhaoxing