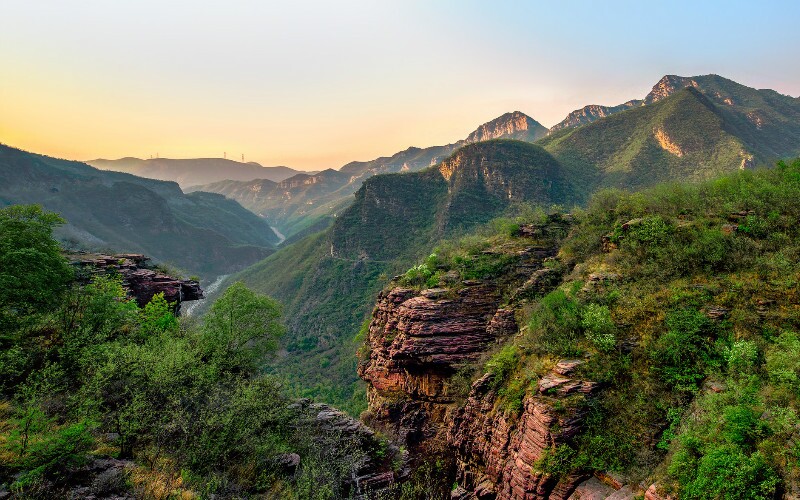 Guoliang Village was a tiny Chinese village high in the Taihang Mountains in Henan Province. Nobody heard about it. The only way to reach it was via steps cut on the side of a very steep cliff on which their village was built. They called the stairway their “Sky Ladder.” Perhaps the difficult access and a defensible position kept the little village safe when trouble was brewing in the area. But in 1972, the village elders including Shen Mingxin were determined to build a road. They wanted their village connected to the outside world and for people to be able to reach it other than by laboriously climbing stairs. So in 1972, with hand tools, 13 strong villagers started carving a road down the side of the canyon road. It is a single lane road that is about 12 or 13 feet across and about 15 or 16 feet high. Many tourists see their handiwork as a colossal feat. The road was finished in 5 years, and the result is that the village is famed as a tourist attraction.

The road is amazing considering that it is tunnels and leveled cliff face. The road stretches about a mile. It reminds me of a tunnel an ant colony might dig. They carved arches for their tunnel and leveled sections of cliff face so that tourist buses are able to go up. It isn’t wide enough to be a two lane road, but cars can pass each other slowly. The road was opened in 1977.

Along with seeing the road, tourists like visiting the welcoming little village people. They like hiking up the road because the canyon and the mountaintop area have spectacular scenery. The village itself is unusual because the villagers built it of stone. The walls, chairs, tables and even the bowls and some eating utensils were made of stone. The village probably has an interesting history of survival in a harsh land. The canyon below the village is very narrow and deep. There are colored rock layers, and you can better see the colors of the layers in the tunnel and along the road cut. There is also a beautiful waterfall.

It is said that to pay for the tools to carve the road, the villagers of Guoliang Village 郭亮村 sacrificed a lot and even sold their animals and other necessities of life. What they probably didn’t realize was that the government would later think that this was a prime tourist attraction in central China. When the borders were opened for foreign travel in the last decade, foreigners started to find it and post pictures about it. Even a few years ago, it was a difficult place for foreigners to find and reach, but now the village is getting famous. Hotels have opened in the village, and bridges and walkways have been built for the tourists so that they can walk around in the area. Foreigners say that the hiking and scenery is excellent and there are lots of stairs to climb around on.

In the summer of 2011, there was a dispute between the villagers and officials about access and payment. Access to the village was restricted to foreigners, but some tourists still got in. So if you are planning a trip there, check the internet for the latest news.

Getting there is still not easy. Here is an address to show people: 河南新乡市辉县万仙山景区.

The Village of Guoliang is about 120 kilometers or 75 miles north of the city of Zhengzhou in the Wanxianshan Scenic Area. If you want to go there by train, the nearest train station is at Xinxiang at (新乡) that is about 50 miles southeast of the Wanxianshan Scenic Area. From there, you can take buses to the town of Huixian 辉县. Get off at the Huxian Bus Station, and then take another bus to the Wanxianshan Scenic Area. This leg costs about 6 RMB or 1 USD and takes 30 minutes. From there, there are buses that cost 11 RMB that go the the scenic area. This leg takes about two hours though it is only about 40 miles away because the buses make many stops. The bus lets you off at the scenic area at a place where you can hire another ride or hike the 4 kilometers to Guoliangcun or 2.5 kilometers to another village called Nanping. There is an 80 RMB entrance fee if the park is open. The walk through Guoliang Tunnel is breathtaking, but keep an eye out for motorists. The road is steep in some places.

Entry Fee: 80 RMB or 12 USD
Accommodations: Food and hotels are open in the village.