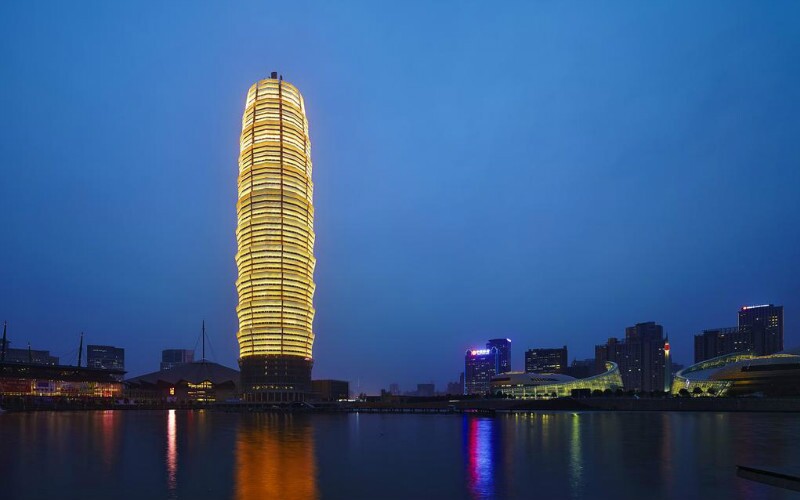 Zhengzhou Er'qi Tower is a twin tower which is 63 meters in height and totaling 14 stories, constructed with reinforced concrete. Each layer of vertex angles is decorated with archaistic cornices. The roof is covered with green glazed tiles. A clock with a 2.7 meters diameter stands on the clock tower which has been built at the top. The surface of tower connects two pentagons. Viewed from the east and west, it's a single tower; it's a twin tower when viewed from the south and north.

Workers at the Jinghan Railway set up a labor union on February 1, 1923, but received resistance from the feudal warlords who destroyed the union. Congress decided to have a general strike on February 4th. Under the guidance of imperialism, the warlords implemented a brutal crackdown. However, the workers fought together against the warlords with great courage. In this strike, over 40 people were murdered and more than 300 innocent citizens were injured, which aroused national workers' indignation.

In the tower, the exhibition hall uses high technology, such as sound and light effects, to display all kinds of historical relics, pictures and written materials of the strike.

Apart from the historical relics, Zhengzhou Er'qi Tower has a model of the 1923 Jinghan Railway Labor Union which was destroyed several decades ago. This model is 2 meters in height and 4 meters in width. Its brick wall has two windows inside which are two large electronic screens, playing movies about the meeting before the strike.

The tower not only applies sound, light and electronic science and technology, but also uses touch screens. There is a time turntable with a diameter of 3 meters. The center of the turntable is the present time and beside it are eight periods ranging from 1920 to 2010. When you step on any period, it will show pictures from that time. Moreover, you can read the materials about the strike by clicking on an e-book.

In order for more people to remember these martyrs, this tower has a special screen to introduce the martyrs. If you want to find out about a martyr, just click on the screen and the related materials will show up. If you want to show your grief, you can send a flower via this screen.

Location: located at the center of Zhengzhou city