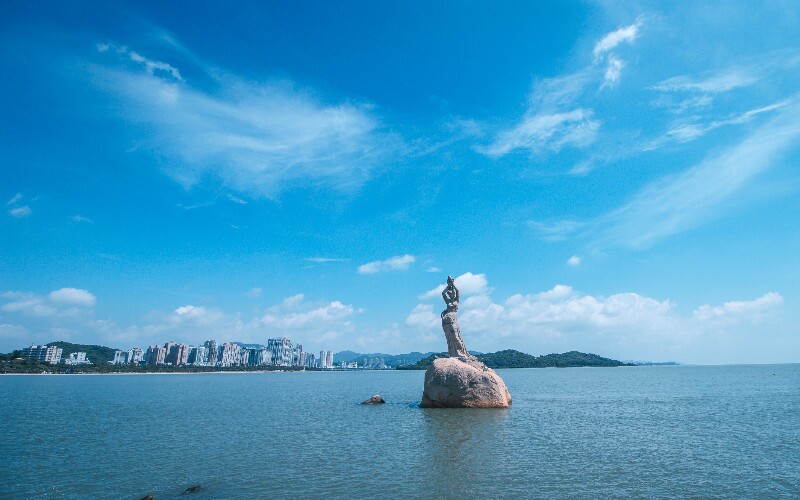 This is a striking sight of sort of Western-style arches in front of a park and the former house of Chen Fang. He went to work in Hawaii and made a real fortune and even was appointed to be the Consular General for China in Hawaii. When he returned to Zhuhai, one of the last Qing Emperors made four archways to honor him and decorate his residence in Meixi Village. Only three of these survive, but it is an interesting part of the Meixi museum and park area.

The Meixi Memorial Archways are located outside Chen Fang’s old property in the Meixi Village near Zhuhai. Zhuhai is next to Macao. There are three archways that look like a cross between Chinese pavilions and triumphal Classical European-style arches. These archways open on the park and his former residence. Three granite archways were built about a hundred years ago by a command from the Emperor of China named Guangxu (1875-1908) at the end of the Qing Dynasty. People say the emperor was mainly a figure-head of Empress Cixi, and he reigned at the end of the Qing Dynasty (1644-1911). The story of Chen Fang’s life is interesting.

Chen Fang went to Hawaii in 1849 looking for work at a time when many Chinese people were going to America or to other places in the world. The Qing Empire experienced a lot of natural disasters and warfare, and there was fighting between ethnic groups in Guangzhou at that time. When he was young, he left Guangdong Province and moved to Hawaii. He started a successful sugar-cane business and became very rich. He also was appointed as the head of the Qing Consulate to the Kingdom of Hawaii. At that time, Hawaii wasn’t officially an American territory. This was a high honor.

In 1890, Chen Fang who was a rich millionaire at a time when a million dollars was really a lot of money returned to his native village of Meixi. He tried to help the poor and started philanthropic projects. He was praised by his fellow villagers, and he was honored by the government.

The Emperor gave four tablets with the words “Generous, Charitable, Selfless and Kindhearted.” He also erected four archways. However, only three archways with multiple arches remain, because the fourth was destroyed during the Cultural Revolution. These triumphal arches combine the Western Classical style for such arches with Chinese decorations such as the “Eight Immortals” and Chinese characters. The archways are now under government protection.

Attractions at Meixi Memorial Archways
The area is now a park and a museum. The scenic area of the memorial park covers an area of about 125,000 square meters or 30.8 acres. Besides the archways themselves, the principal parts of the scenic site consist of the house that Chen Fang built after his return to Meixi from Hawaii, the residence’s garden, and the Chen Fang family graveyard.

At the house, you can see a number of exhibits such as a record of the Chen family tree, photographs of Chen Fang in Hawaii, waxwork figures of prominent people in Zhuhai, an exhibit of Chinese needlecrafts, and an active workshop that make Chinese handicrafts that you can buy. There are also performances of Chinese “Changing Face” Opera and acrobatics.

China Highlights can help you customize a tour to see Meixi Memorial Archways.