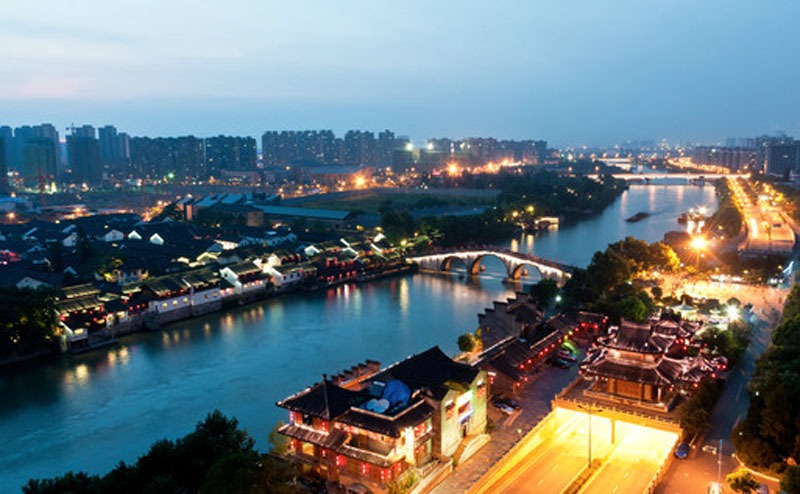 As the oldest and longest man-made canal in the world, the Beijing-Hangzhou Grand Canal is 1,794 kilometers (1,115 miles) long with a history of over 2,500 years, and it starts at Beijing in the north and ends at Hangzhou in the south, running through Tianjin, Hebei Province, Shandong Province, Jiangsu Province and Zhejiang Province along its way. The Beijing-Hangzhou Grand Canal links five great rivers, the Hai River, the Huai River, the Yangtze River, the Yellow River and the Qiantang River.

History of the Grand Canal

Grand Canal in the Spring and Autumn Period

The king of the state of Wu in the Spring and Autumn Period (770 BC-476 BC), Fu Chai, ordered the Hangou Canal to be dug (from the present Yangzhou to Huai'an) in the 10th year (486 BC) of his reign, and he planned a scheme to crusade against the state of Qi in the course of battling for supremacy in the Central Plain Area.

Hangou Canal was connected with Jiang River and Huai River. Dagou Canal (from the present Yuanyang County of Henan Province to Zhengzhou) was dug in the Warring States period (475 BC-221 BC), which linked the Jiang River, the Huai River, the He River and the Ji River as one.

Grand Canal in the Sui Dynasty

Known as Suitang Great Canal in the Sui Dynasty (581-618), the Great Canal was expanded under Emperor Yang's (569-618) order to exert more control over the Yangtze River Delta. Emperor Yang ordered the building of the 1,000 kilometers (621 miles) long Yongji Canal (from the present Louyang to Beijing) in 603, the 1,000 kilometers (621 miles) long Tongji Canal (from the present Luoyang to Huai'an of Jiangsu Province) in 605 and the 400 kilometers (249 miles) long Jiangnan Canal (from the present Zhenjiang of Jiangsu Province to Hangzhou) in 610. Over 3.1 million slaves and criminals were forced by Emperor Yang to build the Grand Canal during the Sui Dynasty (581-618), 2.5 million of whom died owing to overwork and disease.

At the same time, the previous Hangou Canal was reformed during the Sui Dynasty (581-618), and the 1,700 kilometers (1,056 miles) long canal between Luoyang and Hanghzou was navigable, since Yangzhou had become the transportation hub between North China and South China.

Grand Canal in the Yuan Dynasty

Agriculture and Industry along the Grand Canal

The Beijing-Hangzhou Grand Canal belt is among the richest agricultural areas of China, where the industry and transportation are also very prosperous. The large and medium coalmines are scattered in Yuanzhou, Jining, Zaozhuang, Tengzhou, Feng County, Pei County, Xuzhou and Pizhou. The industrial cities along the belt include Shanghai, Nanjing, Wuxi, Suzhou, Yangzhou and Hangzhou, all of which are also famous tourist cities in China.

With well-developed water, land and air transportation, Hangzhou is not only the end point of the Hu–Hang Railway (Shanghai-Hangzhou Railway), but it's the starting point of the Zhe-Gan Railway (Zhejiang-Jiangxi Railway) and the Hang-Chang Railway (Hangzhou-Changsha Railway).

If you're more interested in cultural relics, it's advisable for you to visit the Great Wall and Forbidden City of Beijing, the Humble Administrator's Garden and Tiger Hill of Suzhou, and Linyin Temple and Six Harmonies Pagoda of Hangzhou. For those who prefer exploring the charms of China's ancient water towns, you're highly advised to visit Xitang Town of Hangzhou and Tongli Town of Suzhou.The tourist resources along the Beijing-Hangzhou Grand Canal are rich and colorful, which meet the demands of visitors of various tastes. If you are interested in natural scenery, you're highly recommended to visit the West Lake of Hangzhou, Turtle Head Island of Wuxi, Geyuan Garden in Yangzhou and Beihai Park of Beijing.

In addition, it's worth taking a cruise from Hangzhou to Suzhou to explore the ancient folk customs of the southern Yangtze River delta, and the night cruise is wonderful.

As a large themed museum sitting in Grand Canal Culture Square, the China Beijing-Hangzhou Grand Canal Museum was built in 2002 for the purpose of collecting, protecting and researching the Grand Canal culture. It has been open to the public since its completion in September 2009, and it fully displays vicissitudes of the Grand Canal in history in the forms of material objects such as bridges, boats and ferries.

The famous stretches of the Beijing-Hangzhou Grand Canal are now mainly concentrated in Jiangsu Province and Zhejiang Province, most of which are navigable for cruises.

The 224 kilometers (139 miles) long south Jiangsu stretch runs through Changzhou, Zhenjiang, Wuxi and Suzhou, and connects the Yangtze River and Taihu Lake, which also links the rivers of Zhejiang Province.

The Grand Canal in Zhejiang Province is 120 kilometers (75 miles) long and connects the Taihu water system and the Qiantangjiang water system, and it's navigable throughout the year.
The Beijing-Hangzhou Grand Canal has made great contributions to China's unification, economic development and cultural prosperity in its 2,000-year history, and is awarded as being one of the two great projects of ancient China along with the Great Wall, and it still has a substantial influence on China both economically and culturally.

The Hangzhou section Grand Canal has the most beautiful scenery among all these sections. Travelers can take a boat cruise along the canal, and see the old bridges.. A guide is neccessay to help you understand the interesting history about this ancient canal.

We can also offer half-day or day tours around all of the architectural structures and sites mentioned in this article.