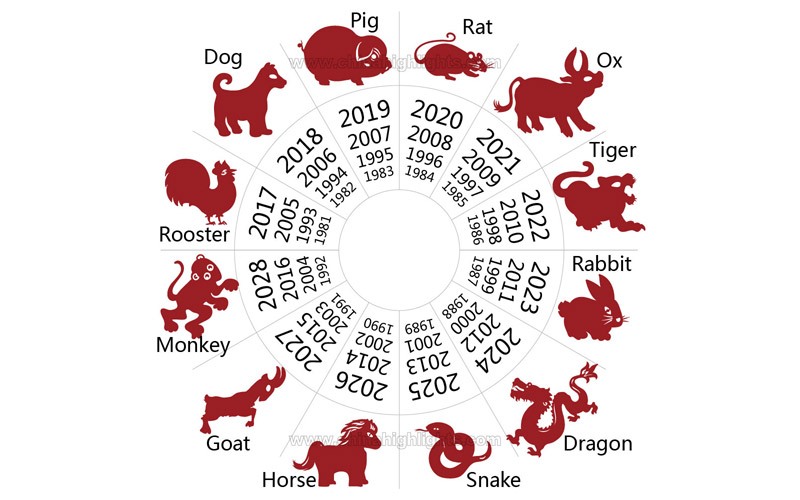 Chinese zodiac years begin/end at Chinese New Year (in January/February). Each year in the repeating zodiac cycle of 12 years is represented by a zodiac animal, each with its own reputed attributes.

2023 is a year of the Rabbit. Why is the Rabbit ranked 4th in the Chinese zodiac? The video below unveils the secret .

You may want to read more about Chinese zodiac years.

For the starting date of a zodiac year, there are two schools of thought in Chinese astrology: Chinese New Year or the Start of Spring.

Most Chinese people use Chinese New Year as the start of the zodiac year. This is popular Chinese astrology. Only traditionalists and professional astrologers use the first solar term.

Therefore, for example if you were born in January or February in 1997, you might be an Ox or a Rat.

You can use our free Chinese zodiac sign calculator below to be sure.

Click the picture below to check each animal sign's horoscope, personality, love compatibility, etc. in detail.

Chinese zodiac animals have astrological and cultural meanings. Chinese people associate each animal sign with certain characteristics. It's believed that people born in a given year have the personality of that year's animal.

Chinese Zodiac Compatibility - Is He/She Right for You?

An important use of the Chinese zodiac is to determine if two people are compatible in a romantic relationship... or any kind of relationship. Zodiac compatibility is usually checked before getting married in China.

People born in a certain zodiac animal year are believed to have attributes of that animal, which determines their personality traits and could either help or hinder a relationship.

Best Matches for the 12 Zodiac Signs

2023 is a year of the Rabbit. Click the animal signs below to learn about each Chinese zodiac animal's horoscope in 2023.

Entering 2023, the fortune of you Rat people is generally good, but due to being in tangential opposition to Tai Sui (the age star), you will encounter some obstacles and your overall horoscope will be one of ups and downs. Be cautious and not impulsive in your actions during this year.

Read more on Monthly Horoscope for Rats in 2023.

Among the 12 Chinese zodiac signs, the Ox is 2nd and the Rabbit is 4th. According to Chinese astrology, the 2nd and 4th positions help each other, indicating that you will have good luck in 2023 (Year of the Rabbit). However, you will still need to work hard and seize every opportunity to make your year more successful.

Read more on Monthly Horoscope for Oxes in 2023.

Compared with last year, Tigers' overall fortune is on the rise, and you are destined to be very comfortable in life and work.

Although your overall horoscope for this year is good, there will be some twists and turns in the process. Tiger people, you should learn to gain useful lessons from failures, fully understand your own shortcomings, and be calm in the face of difficulties, so as to avoid strife and usher in a better situation.

Read more on Monthly Horoscope for Tigers in 2023.

Rabbits, 2022 is your 'origin of life year' (another Rabbit year), which means you will offend Taisui (the god of age). You are predicted many challenges with frequent life changes. Be circumspect with problem solving and communication.

You will need to make extra efforts everywhere and face challenges. Rabbit people, this year won't be such a smooth one, but believe that a rainbow will come after the storm. According to Chinese astrology, wearing red underwear and socks will bring good luck to you.

Read more on Monthly Horoscope for Rabbits in 2023.

Dragons' fortune in 2023 will be affected by some opposition to Tai Sui (the Age Star), but there is no need to worry too much, because you will also be taken care of by lucky stars this year. You need to maintain your good fortune with hard work on a daily basis. With the help of lucky star Yue De, your career development will be smooth sailing

Read more on Monthly Horoscope for Dragons in 2023.

Snake people, your year will develop smoothly in a good direction and your luck will be generally stable. However, due to the influence of good and bad stars this year, there will be fluctuations in your luck within a certain range.

Read more on Monthly Horoscope for Snakes in 2023.

Horse people, in 2023, you will enter a year in conflict with Tai Sui (the age star), which will have a great impact on your fortunes. This year will be full of ups and downs, and you'll need to be more careful in your work. With your continuous efforts, though, Horses, you can get through this restless year smoothly.

Read more on Monthly Horoscope for Horses in 2023.

Goats, in year of the Rabbit 2023, your horoscope is relatively turbulent, but you need to look at it with optimism with a view to taking advantage of the up times.

You will be influenced by Tianyi nobles (four favorable gods in Taoist tradition) and Kuigang nobles (another four 'pillar gods') in your careers, so that you will have a good career prospects.

Read more on Monthly Horoscope for Goats in 2023.

Monkey people, your overall horoscope for 2023 includes plenty of ups and downs.

It is recommended that you put in more effort this year than before. Being taken care of by lucky stars this year, you will break through obstacles and eventually succeed.

Read more on Monthly Horoscope for Monkeys in 2023.

Rooster people, you will suffer from opposition to Tai Sui (the 'age star') in 2023, and your luck will be particularly unfavorable.

You should maintain an optimistic attitude, be prepared to meet various challenges, and put in more effort than last year. Believe that after the storm, there will be a rainbow.

Read more on Monthly Horoscope for Roosters in 2023.

Dog people, your overall horoscope is one of ups and downs, and your luck in health and wealth may continue to decline, which will require more attention in 2023. In work and love, you must do your own thing in a down-to-earth manner, so that your overall prospects will gradually become smoother.

Read more on Monthly Horoscope for Dogs in 2023.

Pig people, your overall fortune in 2023 will be better than in 2022. As long as you pay attention to your health and the risk of loss of property, and work hard, you should have unexpected pleasant surprises and gains..

Read more on Monthly Horoscope for Pigs in 2023.

People born in a year of the Rabbit are called "Rabbits" and are believed to be vigilant, witty, quick-minded, and ingenious. The most compatible zodiac signs for Rabbits are Goats, Dogs, and Pigs.

What zodiac animal signs are lucky in 2023? Firstly come Oxes, Tigers, and Snakes. Then, with not quite so much luck, come Dogs, Horses, Goats, and Pigs. Rabbits' and Rats' fortunes will be influenced by 'opposition to Tai Sui'. Roosters and Monkeys will have to work especially hard to make headway.

Read more on the year of the Rabbit including the 12 Chinese Zodiac Signs' Horoscopes for 2023.

2023 is the benmingnian (本命年 'origin of life year') for those people born under the Rabbit sign. Read more on How to Make Good Luck in Your Zodiac Year Easily.

Do you know why the 12 Chinese zodiac animals are in their fixed sequence from Rat to Pig?

The sequence of the 12 signs is popularly explained by a myth about when the Jade Emperor (the supreme immortal) wanted to select 12 animals to be his guards. All creatures on Earth were summoned to participate in a race. The earlier one went through the Heavenly Gate, the better the rank one would have.

Why is the cat not one of the 12 zodiac animals? It is said that Cat and Rat got as far as crossing the river together on Ox's back, but Rat pushed Cat into the water. Cat was washed away and didn't get to the Heavenly Gate in time to get a ranking. After that a great enmity grew between Cat and Rat, so that rats scatter in all directions when a cat appears.

The story is widespread (and widely varying) among Chinese. Though it is made up, it might be interesting for you to tell your children and friends.

Actually, the 12 animals were chosen very deliberately by the ancients, after many revisions. The zodiac animals are either closely related to ancient Chinese people's daily lives or have lucky meanings in ancient Chinese culture.

There is a popular Chinese folk saying that 9/10 Goats are inadequate (十羊九不全 '10 Goats 9 incomplete'), which implies that most people born in a year of the Goat are destined for bad luck. Most Chinese people also believe that people born in a Goat year will grow up to be followers rather than leaders. Although this is an outdated superstition, it has a real effect on Chinese society.

Conversely, the Dragon is the most coveted zodiac sign, with Chinese births peaking in Dragon years.

Rationally, it's hard to identify the luckiest or unluckiest zodiac signs, as each sign has its own advantages and disadvantages. Socially, different combinations of zodiac signs cause different relational dynamics, which may affect someone's life more, as we don't live in isolation.

What are the differences between Chinese zodiac and western astrology?

The main similarity between the two systems is that both systems are based on time periods of birth, and they both have 12 symbols or signs with associated personalities and fortunes.

However, there are big differences in their origins and astrological theory.

With the Chinese zodiac, the 12 signs are derived from the ancients' musings about archetypal animals, people's personalities and fortunes, and their relationships with one another and years of birth. A myth about a celestial race was later developed to explain the Chinese zodiac sequence.

This differs from Western astrology, where the 12 zodiac signs are based on constellations' positions relative to the earth. The constellations were named according to Greek mythology and astrological theory was developed based on the stars supposed influence on human personalities and lives.

In addition, the Chinese zodiac is calculated on a year-by-year base while the Western zodiac corresponds with "months".

Read more on Differences between the Chinese Zodiac and Western Astrology.

Chinese Zodiac in Other Asian Countries

The Chinese zodiac has a great influence on several other Asian countries, such as the South Korea, Japan, Vietnam, Singapore, Thailand, and Myanmar. In some countries, the zodiac signs are the same as the Chinese ones, while some of the animals differ in other countries.