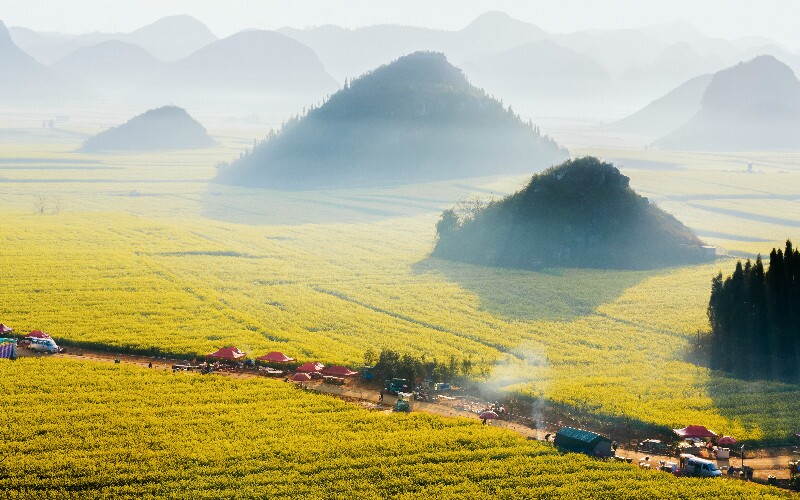 The ‘South of the Yangtze River' cities are highly recommended tourist destinations in March. Generally speaking, the rainy season of this region begins in April. In March spring flowers appear and it drizzles at times, making the regions of Shanghai, Yangzhou, Suzhou, and Hangzhou even more graceful and more worthy of a visit.

Beijing is still chilly, compared with Central and South China. It is windy, and the sand storm weather has been improved because of forestation. However, the average temperature still fluctuates around 7 °C (45 °F), and it might be snow at times. So prepare warm clothes when traveling to Beijing in March.

Ancient water town is one of the representatives of attractions in regions south of the Yangtze River. Zhouzhuang Water Town is in Suzhou, a city famous for traditional Chinese garden. It is China's number one ancient water town with the most picturesque landscapes, though it is a little more crowded and commercialized than others. What you should not miss is the dreamily graceful scenes in the morning and at nightfall, when the town will show you how ancient China used to be.

Noted for having "the most beautiful villages in China", Wuyuan prefecture has many ancient Ming and Qing style architectural features, including 113 ancient ancestral halls, 28 ancient mansions, 36 ancient dwellings, and 187 ancient bridges.

What you will see: March is the best month to visit Wuyuan. Every village in Wuyuan is built with a river in front, and mountains behind, being peacefully harmonious with the natural scenery. In March the village will be decorated with pink peach flowers, white pear flowers, and vast lemon rape flowers, together with green mountains and rivers and ancient style buildings, forming a elegant idyllic picture of China.

Weather: Generally speaking, Wuyuan is a little cold in the beginning of March. Since the 11th day of the month, the temperature will rise.

Recommended tour: 3-Day Essence of Huangshan Tour, you can extend one more day to Wuyuan.

Dali is famous for its elegant landscapes and minority customs (especially for the Bai minority).

Used to be one of the birthplaces of Yunnan culture, Dali has numerous historical sites, which can let you know more about the history of Yunnan Province, including Ancient City of Dali, Taihe City Nanzhao, and Three Pagodas. Xizhou Residences is a great destination for learning Bai minority. The natural scenery of Erhai Lake and Cangshan Mountain should not be missed.

Traveling to Yunnan: Yunnan Province is a glorious tourist destination both for foreign and domestic travelers. In March Kunming, Dali, and Xishuangbanna are warmer than other places. Lijiang is a little bit cold in morning and at night. The lowest temperature of Shangri-La can reach to -4 °C (25 °F). Anyway, Yunnan is an ideal tourist destination in March.

Recommended tour: Our 8-Day Kunming, Dali, Lijiang, and Shangri-La Highlights Tour covers all the most popular attractions in Yunnan Province.

Hainan Island is the principal island of Hainan Province. Located in southernmost China, this island is the warmest place in China during March. Nice weather makes the month a great time for swimming and diving.

On Hainan Island most of the activities are related to the sea, beaches, and sunshine. You can enjoy a leisurely time in the "oriental Hawaii" — Yalong Bay, take photos in Dongzhaigang Mangrove Forest (东寨港红树林), hike in the Tianya Haijiao Scenic Zone (literally the end of the sky and sea), and shop for duty-free commodities.

Yes, it always drizzles in Guilin in March, which makes the city not very ideal for traveling with heavy humidity. However, the drizzling Li River enshrouded by mist is one of Guilin's highlights, which you cannot see in other months.

The drizzling can make sightseeing difficult and dreary at times. As long as you prepare for it, you'll be fine: don't forget to bring with an umbrella.

In March you can enjoy the dreamily beautiful Li River when cruising from Guilin country suburban to Yangshuo Town, take a bamboo raft on the Yulong River, and discover the idylic beauty by cycling along the countryside road (there will be vast lemon rape flowers among the rivers and mountains).

Also read: Where to Travel in February?