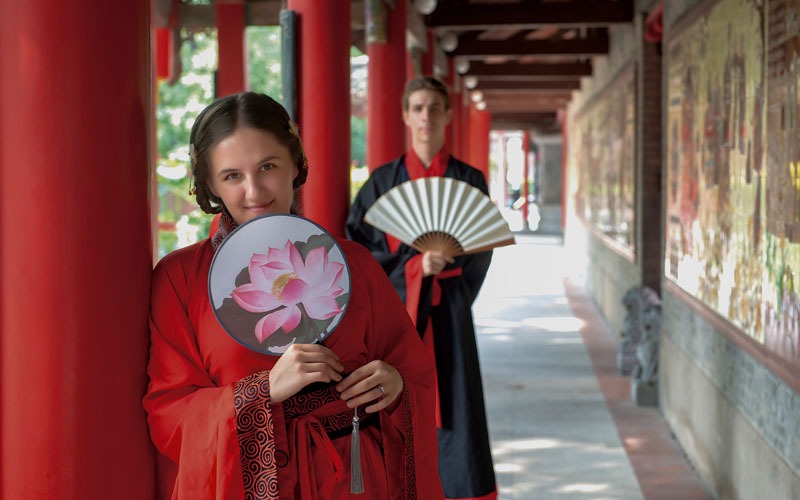 Traditional Chinese clothes were an evolution of their long, loose, straight-cut jackets and pants or gowns. They reflected traditional Chinese aesthetics, philosophy, and social values as they changed through over 3,000 years of history.

1. Hanfu — The Most Traditional Chinese Clothing

The Hanfu ('Han clothing' — the majority of Chinese are of Han ethnicity) is the oldest of China's traditional clothes. Legend traces it back to over 4,000 years ago when Huangdi's consort, Leizu, made cloth with silk. It was constantly improved throughout several dynasties.

Until the Han Dynasty, the Hanfu was adopted and vigorously promoted by the ruling class. It then became the national clothing of the Han ethnic people. It also had a far-reaching influence on neighboring Asian countries, such as Korea, Japan, and Vietnam.

Nowadays, people seldom wear Hanfu except on special occasions, such as festivals and wedding ceremonies, or by young girls who want to show off or taking photos.

Types of Hanfu for Women and Man

People use various ornaments to decorate their Hanfu, worn on the belt or sash. The ornaments are called pei (配, which means match or decorate). The more decorations they had, the higher social status they had. Men wore hats, and women wore headpieces to go with their Hanfu.

The cheongsam (qipao) evolved from the Manchu women's changpao ('long gown') of the Qing Dynasty (1644–1912). The Manchu ethnic people were also called the Qi people by the Han people; hence their long gown was named qipao ('Qi gown').

Originating in the Qing Dynasty, the cheongsam has mainly developed into Beijing styles, Shanghai styles and Hong Kong styles. There are many differences in decorations, colors, materials, and designs. Read more about Qipao.

Beijing's cheongsam style is more traditional and conservative than Shanghai's and Hong Kong's. The colors of Beijing-style qipaos are much brighter and their decoration is more complicated than other styles'.

The Tang suit often refers to a type of Chinese jacket rather than the clothing of the Tang Dynasty (618–907). The origin of Tang suit actually only dates back to the Qing Dynasty era (1644–1911). It was developed from a type of the era's Manchurian clothing — the magua (马褂, 'horse gown').

This name came from the overseas Chinese. As the Tang Empire was famous for being prosperous and powerful in the world, foreigners called the overseas Chinese people "the Tang people" and the clothes they wore were called "Tang suits" (which has been translated as Tangzhuang 唐装).

The Tang suit is a duijin (对襟, a kind of Chinese-style jacket with buttons down the front) with a Mandarin collar (a band collar) and "frog" buttons (knobs formed of intricately knotted cord).

Traditional Tang suits, based on the magua of the Manchu ethnicity, usually have Chinese characters on them to express good luck or best wishes. The most popular characters include fu (福, 'happiness and good luck') and shou (寿, 'longevity').

Nowadays, Tang suits have become a kind of formal dress worn on some special occasions, such as Chinese New Year, wedding ceremonies, or important events. Read more about the Tang suit.

The Zhongshan suit, also known as the Mao suit overseas, is a type of men's jacket. It was first advocated by Dr Sun Yat-sen (Sun Zhongshan in Mandarin, hence Zhongshan suit).

There were no fashion shows in ancient China. Traditional Chinese clothing was the outcome of people's aesthetic tastes and social customs. It varied historically, regionally, and through the social hierarchy.

Traditional Chinese clothes usually adopted a straight cut and were loose in shape. In addition, the overall harmony of the outfit was also emphasized.

People normally wore light colored clothing in daily life. Red, bright yellow, and purple always exclusively belonged to the emperor and the imperial family. The mass people mostly wore red at weddings. Besides that, white clothing was normally worn at a funeral.

For example, for women, only an empress or official wives could wear true red while the color was prohibited to concubines.

At the very beginning, the ancient Chinese only covered their bodies with leaves. As agricultural development increased, more clothing material appeared. In later years, linen, cotton, and silk were the prominent materials.

During the Ming Dynasty (1368–1644), according to the government's policy of physiocracy and restriction of business, businessmen were forbidden to wear silk clothing, even if they were rich.

Almost every dynasty had its own unique clothes, some of which were really exquisite beyond compare.

The top-bottom clothes, consisting of an yi (衣 upper garment) and a chang (裳 lower garment) were the earliest form of clothing recorded in Chinese documents. This two-piece clothing is said to date back to legendary Huangdi's reign (2697–2597 BC).

The one-piece clothing was called shenyi (deep robe) and can be traced back to the late Zhou Dynasty (1046–221 BC). The yi and the shang were sewn as one piece although they were cut separately.

The shenyi was widely adopted by various dynasties throughout the history of China. It was considered to be formal dress in the Han Dynasty (206 BC – 220 AD), and it still has a great influence on modern-day one-piece clothing.

If you have the interest to learn more facts about Chinese traditional clothes, just contact us to tell your interests and requirements and China Highlights will create a China tour for you.