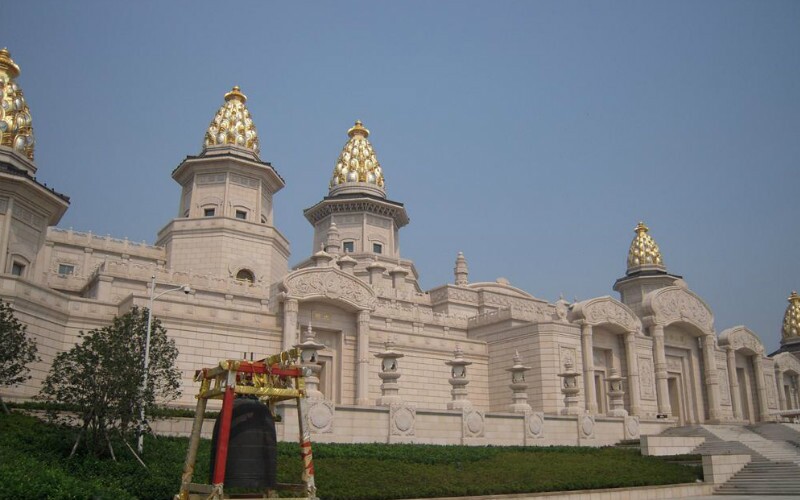 The Lingshan Grand Buddha sits on the site of an ancient Buddhist Temple- Xiangxiang Temple of the Tang and Song Dynasties. The outdoor bronze statue of Sakyamuni Buddha is 88 meter high. It was set up at the same time when the temple was rebuilt.

The grand Buddha acquire its name because of the location on the small Lingshan Mountain. The Mountain was so named by Tang Xuanzang, a Tang-dynasty Buddhist Monk whose pilgrimage trip to India is well-known throughout the Chinese history.

The grand Buddha is made of tin and bronze, taking advantage of bronze's quality of erosion resistance. Another concern is the bronze's artistic value. Bronze material deriving from the essence of the classical art in the Stone Age, is an extremely splendid part of Chinese traditional culture itself.

The Lingshan Grand Buddha was built according to the thirty-two features of the Buddha in the sutra. The grand Buddha looks at all flesh with an affable smile. His right hand has a fearless seal with hand lifted and the center of the palm outside, which symbolizes removal of sufferings. And his left hand has a wishes seal with hand lifted, the center of the palm outside, and the thumb and the forefinger in the ring type like "OK", which signifies giving of happiness. They are all features of benediction. Sedate, dignified and delicate, the Buddhist statue has a solemn and satisfactory shape, showing the Buddha's feature of mercy.

A grand Striking Bell celebration is held at the Lingshan Mountain at the Lunar Chinese New Year Eve annually which draws hundreds to participate.

Geographical location: on the small Lingshan Mountain on the west side of the Qinlv peak of Mashan in Wuxi City.

How to get there:Take the 88, 89 and 91 buses from the railway station to the terminal station at the Linshan Mountain.