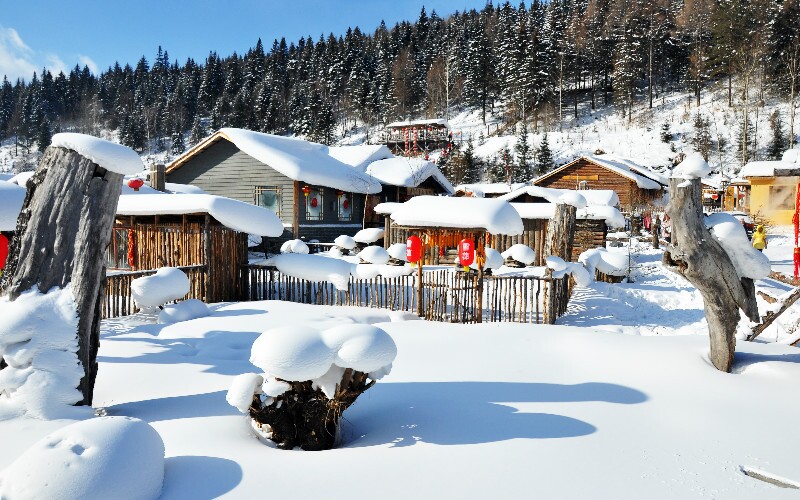 February is the last full month of winter for all but the far north of China. Winter is still in full swing in North China with freezing weather. In Central and South China, it is slightly warmer than in January but still feels damp and chilly. Signs of spring appear in the south by the end of February.

February is not the best time for travel due to the cold temperatures, but it's the low season, which means you can have some attractions to yourself. Read on for more about China’s weather in February and our travel suggestions.

Travel Around China in February

Apart from the low temperatures in February, you will m a better travel experience due to a reasonable budget and less crowded attractions and lower prices. Winter sports and attractions add seasonal options to your China trip.

Chinese New Year, also called the Spring Festival, usually falls in February. During the festival, China will be decorated with red lanterns, red couplets, and other festive decorations.

Using transport is generally not a good experience at the beginning and the end of the festival, because millions of Chinese people head home to celebrate it with their families. The hectic travel period starts about three weeks before the start of New Year week and continues for about two weeks afterwards.

Trains in general are likely to be fully booked days in advance, and certain popular flights may be sold out. It is best to make arrangements well ahead of time.

Read more about the Top Places to Visit in China in February.

Snow falls occasionally, but the total amount is very little because North China is dry.

Beijing generally gets above freezing during the day and then it drops at night. The city only gets a dusting of snow - about three times in the month - but more settles on the Great Wall. Temperatures average -7–4°C (19–39°F) and there are typically 2 days (6 mm, 0.2 in) of light rain/snowfall in February. Xi’an is similar.

The northeast region, including Harbin, stays below freezing.

Clothing: You'll need an extra thick coat and layers of winter clothing to stay warm, as well as gloves and a hat.

Harbin: The Ice and Snow Festival is still open in early February. The ice and snow sculptures haven't melted yet and you can have fun in this snow world.

Beijing: The weather is dry and most days are clear in February in Beijing. It's good for sightseeing. Although the trees are bare and daylight is pale, you can enjoy a less-crowded travel experience as Beijing is usually one of the most crowded tourist cities. You can also have the Great Wall to yourself.

Windy, humid, and damp weather drives people inside and most tourists to other places in February. The average temperatures are above freezing.

Shanghai: During the Chinese New Year celebrations, there are many interesting activities in Shanghai. You can see the fireworks, visit the temple fairs, and taste the festival foods. There is a lantern display at Yu Garden and a bazaar during the festival.

It sometimes snows, even in central areas to the south of the Yangtze River. The high humidity and lack of heating makes it feel even colder than in Beijing to the north.

Clothing: Take a winter coat, warm layers, and warm footwear. You might need your coat indoors if the heating isn't adequate.

Chengdu: As winter is the low season, you will have a better chance of seeing giant pandas close up, since there will be fewer crowds. Giant pandas are generally more active in Chengdu's low winter temperatures.

Guilin feels cold because of the high humidity and rain, although it never freezes. Daily temperatures average 6–14°C (43–57°F) and there are, on average, 13 days (89 mm, 3½ in) of rainfall in February.

In Hong Kong, the weather is pleasant with mild temperatures. The average temperature is 13–17°C (55–63°F), and it rains for only 5 days of the month, which can make your time outside more enjoyable than in the hot and wet summer.

Clothing: Take a warm coat and layers for Guilin, or a wind/rainproof jacket for further south. You might need to wear your jacket indoors if there is no heating.

Guilin: The weather is damp and chilly in February, but the natural scenery in Guilin is still mostly green. You can still have a pleasant trip visiting the mountains in the city and the Li River. Remember to wear warmer clothes when you are on a Li River cruise or in the mountains.

Most of west China is inhospitable weather-wise in winter. February is not a good time to travel the Silk Road because it is simply too cold. Tibet is very cold with lower oxygen, and is usually closed to foreigners around Tibetan New Year.

West Yunnan is more comfortable than further West. In Lijiang daily temperatures average 3–15°C (37–59°F) and there are typically 4 days (6 mm, 0.2 in) of rainfall in February.

Clothing: Dress in layers, and take a winter coat, gloves, and a hat.

Yunnan: There are fewer tourist groups in the low travel season. You can travel to Kunming, Dali, and Lijiang, and even extend your trip further west to Tibetan Shangri-La (without worrying about restricted access), though cold increases with altitude. You will have these places more to yourself.

Planning a China trip? Our travel advisors are happy to give you suggestions and guidance when planning your trip. If you are interested in touring China in February, contact us for help. Let us help you plan a personalized February tour.

Take a look at our customizable tour suggestions, for inspiration: