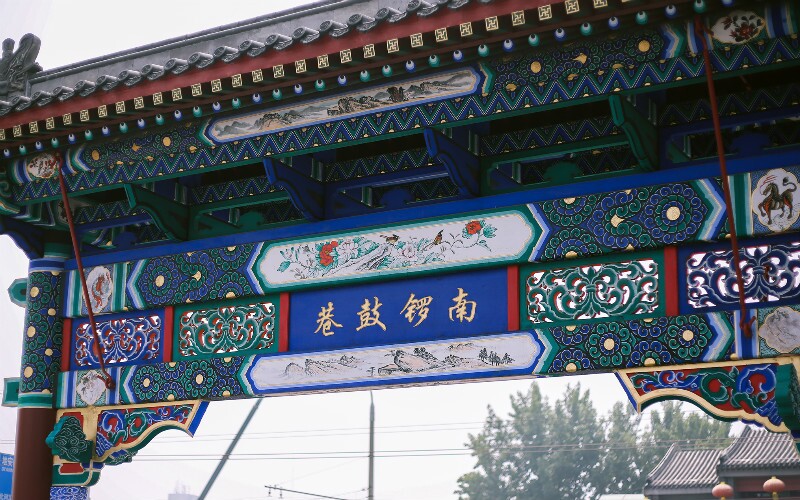 The Southern Gong and Drum Lane is one of the oldest streets in Beijing. It is popular with a lot of tourists and expats who like the many shops, restaurants and bars.

The Southern Gong and Drum Lane 南锣鼓巷 has the reputation of being one the oldest hutongs in Beijing. This street is now a favorite shopping, bar and restaurant street for tourists and expats, and some of the stores and restaurants are owned or staffed by expats. So for example, you can find authentic Indian food in a restaurant owned b y real Indians, buy shirts at a t-shirt shop owned by a British man, or shop for ceramics in a store staffed by a Philipina.

The owners of the shops and restaurants know how to cater to foreign tastes. Some of the places are upscale and designed for expat executives working in the area. The street is popular among young people, and it is less expensive then upscale places in Beijing like Hou Hai. So it is a more relaxed shopping and eating street popular with tourists who want to save money and with young people.

A hutong is a Chinese street that was walled in by the residences on both sides and gated. The Southern Gong and Drum Lane was a hutong that had neatly laid out straight branch hutongs along it. Sites along it that you can see include the Royal Residence of Seng, Ke Yuan, and the Bar Street.

The Royal Residence of Seng

When entering the south entrance of the lane, you can see the first hutong that had the residence of the Seng Clan. It is now protected by the government. It is the key cultural relics protection site in eastern area of Beijing. The west entrance of the Parched Peas Hutong is the ancestral home of the Seng clan.

Ke Yuan or Ke Park was regarded as an artistic private garden before the revolution of 1911. It was the residence and garden of Wen Yu who was an official of the Qing Empire. Here, five courtyards are linked together. The garden was finished in 1861.

The Bar Street of Southern Gong and Drum Lane

The Bar Street of the Southern Gong and Drum Lane has distinctive features. The bars have traditional decorations. The bars here aren’t generally noisy or rough. It is a hangout for young people. Many bars have WiFi internet service.

Famous and wealthy Manchu families used to live there. The Manchus were the people who ruled the Qing Empire (1644-1911). The lane is now about 786 meters or about half a mile long and about 8 meters or 9 yards wide. It was an area for wealthy families even during the Ming Empire period (1368-1644). In the early 20th century, Nationalist political leaders, artists and literary figures used to live there.

China Highlights can help you customize a tour to visit the Southern Gong and Grum Lane and other highlights in Beijing.

Most taxi drivers should know how to get there. You can show the above address to a driver. It costs 10 RMB or 1.6 USD to take a cab from Wang Fu Jing to Nan Luo Gu Xiang!

Open: Chinese people often work Sundays and then take the day off on Mondays. If you go before dinner hours on Monday, you might find some shops and restaurants closed.