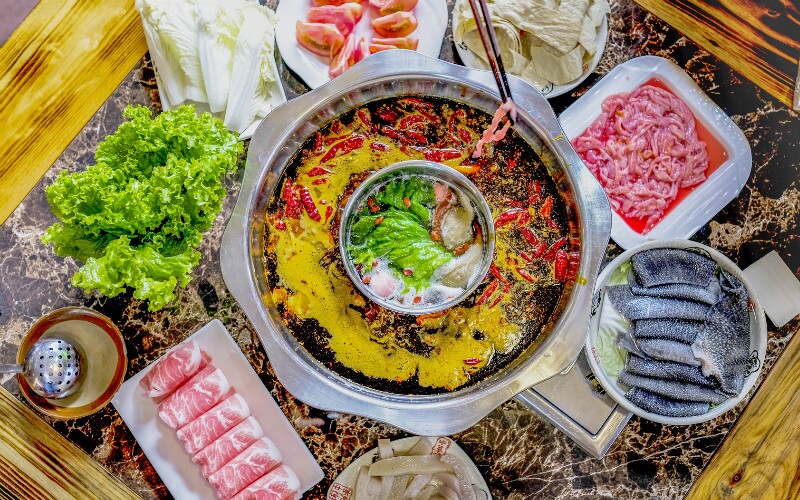 Chongqing Hotpot has long been a standard kind of restaurant meal. You may enjoy choosing your own ingredients and adding them to the pot yourself to make a kind of soup or stew in the pot on the table in front you. People usually want red soup broth that is full of red pepper or a clear soup broth.

There are only two types of soup for a hot pot- one is Spicy and the other is not spicy (usually white in color). The base of the soup (either spicy or non spicy) varies from restaurant to restaurant- it is usually bone soup but chicken soup is also common. The flavored oil dip is NOT castor oil- it's sesame oil. And it can be 'dressed' up in a variety of ways according to your tastes- using vinegar, chicken powder, cilantro, chives, or a number of different things that are offered. If you have a mixed group- meaning some don't eat really spicy food...there are special pots with a divider in the middle and you can have both the non spicy and spicy soup. Usually if it's mixed- even the Chongqing people will boil vegetables in the non spicy side to cook them...and then just quickly dip them in the spicy side for more flavors.

Hotpots are a traditional famous dish of Sichuan, of which Chongqing hotpot is specially noted. Characterised by hotness, heavy flavours and dense soup, Chongqing hotpot ingredients include beef and vegetables, which are simmered in a ‘help yourself’ pot of simmering broth. Hotpot enjoys a long history in China, for example, Chongqing hotpot has been around for over 100 years, since the early middle of the Qing Dynasty.

It was first produced in 1937. High quality fresh beef is mixed with sugar, salt, natural flavor, plant oil and so on. It has a special flavor and is said to keep you healthy.

Sliced meat with crispy rice is a major dish in Chongqing. The meat tastes soft and tender forming a contrast with the crispy rice. When sampling this dish, you can even hear the sizzling sound emerging from the rice.

Chongqing's city center is filled with restaurants and food stalls where you can pick up a cheap and filling meal for less than RMB10. Local specialties here include dumplings and pickled vegetables and, different from many other Chinese cuisines, Chongqing dishes are ideal for the solo diner- arriving in small individual sized portions!

This is where the HOTPOT originated and Chongqing residents are still very keen on their native dish, tucking in even when the sun is shining.

All the major hotels here, (including the Marriott and Holiday Inn) serve high quality western fareand other Chinese regional cuisine.

You might want to try the common noodle dishes. Spicy flavored noodles might be better for your health because the spices kill bacteria. If you are eating at a cheaper restaurant, make sure the meal is served hot. Eat cold or room-temperature food only at the cleaner places.

Sichuan's special dessert- cake butter is made with sweet rice, after which red beans, roses, sesame seeds and meat are added and the butter is steamed. This dessert is soft and sweet yet refreshing.

This is a well-known product of Chonqing. It’s made from 25 different ingredients, such as chili, bean sauce, candy, flavor, natural fresh sauce and so on. The taste types include very spicy, spicy, mild, lichee, seafood, and so on. The water ration is 1:3.

Since Chongqing is located along JialingRiver, travelers have a good opportunity to sample various freshwater fish, including Jiangtuan fish, also called big-head fish, which is probably the best.

Pork leg cooked with rock candy is a common household dish of the Chongqing people. The finished dish, red in color and tender to taste, has a strong and sweet after-taste.

This delicious sauce is produced at the Chongqing Yongchan Brewing Factory. It has a 200 year history, and is made from beans, sticky rice, distilled spirit and so on. It goes very well in a number of dishes.