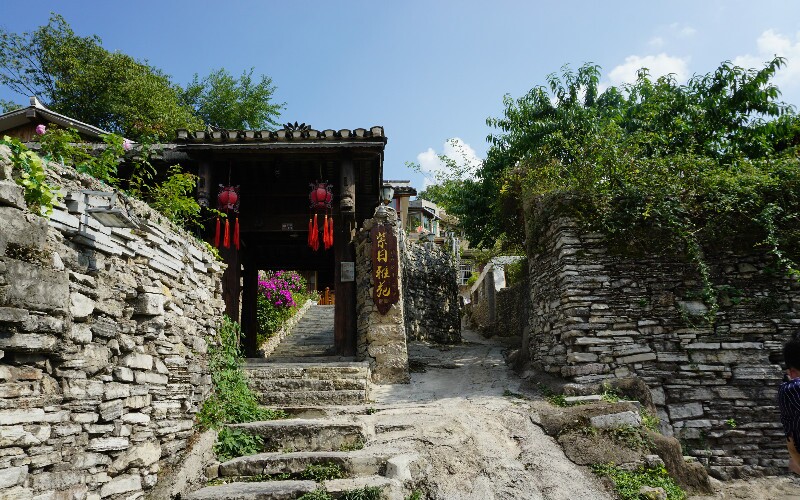 Qingyan Ancient Town was established in 1378 by Emperor Zhu Yuanzhang, the first emperor of the Ming dynasty (1368–1644).

At first Qingyan was a post station, an important link on the ancient post route from Guangxi to Guizhou. Government documents and military intelligence were sent to and from the station. Later, an army was based there and built up the settlement as a garrison.

Today the town covers an area of 3 square kilometers. It retains much of its original layout and many of its ancient buildings, from the Qing (1644–1912) and even the Ming dynasty. Visitors can see well-preserved stone-slab lanes, archways, watchtowers and battlements. The town was originally built of stone. Fantastic stone walls still remain, with gates facing north, south, east and west. There were originally eight stone tablets outside the gates and three of these remain today, each with intricate sculptures.

Many other historical relics survive. Among its 37 tourist attractions are 9 temples, 8 shrines, 5 pavilions, 3 caves, 2 ancestral halls, 1 palace and 1 academy. There are also 3 ancient archways. Most of these ancient buildings are exquisitely carved with terrapins, dragons and other traditional Chinese patterns. Imperial examinations for recruitment into the civil service in China began in 605 AD. For more than 12 decades, no one from either Guizhou or Yunnan province gained first place in the national examinations.

In 1886 at the stage of 29, Zhao Yixiong, a native of Qianyan, came first in the national exams. This surprised other scholars, who had previously regarded Guizhou as ‘uncivilized’.

Chang Pinggang was a county fellow of Qianyan who became the general secretary of Dr Sun Yat-sen, the first president (in the first two-plus months of 1912) of the Republic of China.

Qingyan is home to some famous local specialties. One such is rose candy. History of the candy dates back as early as 1874 and its recipe has been passed down through generations. Relax over a drink of sweet rose tea in one of the local restaurants. Another popular local product is shuanghua vinegar. It is dark red, quite thick, slightly sweet and leaves a pleasant after-taste.

Qingyan is certainly worth a visit. Stay for one or two nights and sense the history and modernity of this traditional town. 90% of our clients tailor their tours to suit their budget and interests.