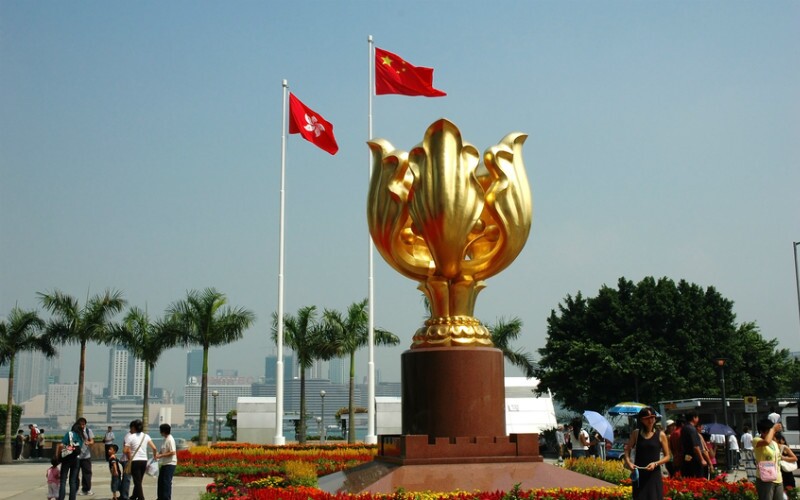 Hong Kong has a rich history, and Hong Kong Golden Bauhinia Square is at the center of it all. It is one of the main tourist attractions in Hong Kong, and it is also popularly known as the Expo Promenade. This is where the flag raising ceremony is held every morning.

This square got its name from the golden bauhinia blakeana statue facing the Wan Chai waterfront at the center of the area outside the Hong Kong Convention and Exhibition Center.

The 66-foot statue was given by the Chinese Government to commemorate Hong Kong's independence from Great Britain on July 1, 1997. The gilded bauhinia flower is an important symbol for Hong Kong people. Its base is made of a red granite pillar on a pyramid.

Everyone can witness the flag raising ceremony in Hong Kong Bauhinia Square. They can participate in the three flag ceremonies. Tourists are more likely to come in time for the daily flag raising that happens every day except for the first day of the month.

Many domestic and foreign visitors flock to Golden Bauhinia Square to witness these ceremonies. Tourists love to take photos with the monument. Many people enjoy strolling along the 400-meter waterfront Expo Promenade. This area is also the best spot to watch the Symphony of Lights performance at night.

The first ceremony was held on the night of June 30, 1997. Former shipping magnate Tung Chee Hwa became the Hong Kong SAR Chief Executive as the clock struck midnight. The Golden Bauhinia was a gift given to Hong Kong after 156 years under the power of Great Britain.

Symbols and Their Meaning

The monument serves as a symbol of reunification. Inscriptions in President Jiang Zemin's calligraphy can be found at the monument. Hong Kong's sovereignty is symbolized by the white ring around the pinnacle. Meanwhile, the 50 smaller rings denote Hong Kong's way of life and the capitalist system that will remain unchanged for another 50 years.

The Golden Bauhinia is formed with stone tables overlapping each other. Each tablet represents the years from 1842 until 2047. There are six tablets that represent the six most important years in Hong Kong's history. They are round and made of lightly colored granite.

It is easy to find Golden Bauhinia Square as it is a very popular landmark in Hong Kong. It is only a 15-minute walk from the Wan Chai MT Station.

Starting there, walk across the footbridge. Turn right and continue walking to Central Plaza, pass through the overhead walkway and go down to the ground level. Go directly to the waterfront ahead, and the golden reunification monument can be found on the left side.

The Hong Kong Convention and Exhibition Center is among Hong Kong's most impressive architectural sites. This place shows off the visual proof that Hong Kong is becoming even more developed.

Inside are five exhibition halls, two theaters, two convention halls and 52 meeting rooms. Financiers and businessmen make this place their favorite destination. There are also restaurants that suit that tastes of both domestic and foreign visitors within walking distance from Golden Bauhinia Square.

Central Plaza is the tallest building in Hong Kong and among the highest in Asia. Central Plaza is a 78-storey building that is also among the world's tallest concrete-framed buildings. It provides the city's most amazing timepiece as the rods at the top change colors every quarter hour.

Happy Valley Racecourse is the best place for all racing enthusiasts. Happy Valley boasts high-end technology for betting and live broadcasts on its gigantic screen. The fun starts at night, and both foreign and domestic visitors love to take a peek. It is only a few minutes from Golden Bauhinia Square by tram.

Exchange Center is not just a place for the stock exchange in Hong Kong. It has also been recognized as an important architectural achievement by Time Magazine. People do not only come here for financial transactions. They also strike a pose and take photos at the same time.