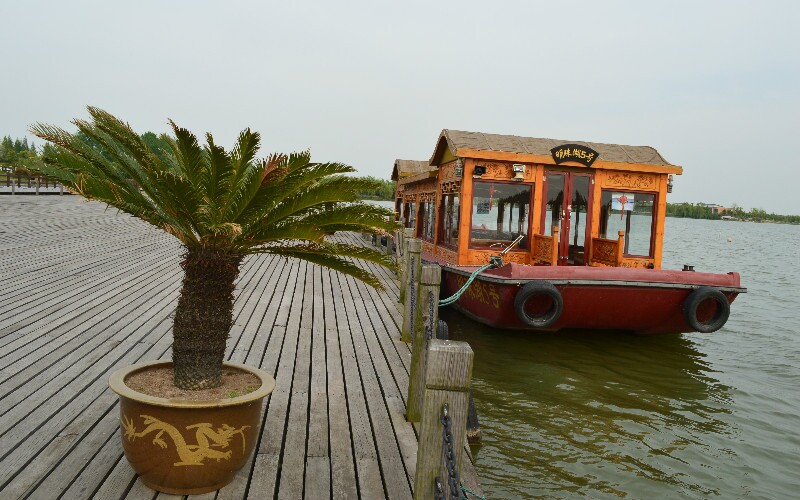 Located on the estuary of Yangtze River, Chongming Island is the third largest island in China. Being the largest alluvial island at the estuary of a river and the largest sand island in the world, Chongming Island is also acclaimed as “Door to the Yangtze River, Yingzhou Island (a celestial mountain in fairy tales of ancient China) in the East China Sea”.

The main attractions on Chongming Island are:

The whole island is flat in terms of terrain, with fertile soil, luxuriant forests and abundant resources. As a result, Chongming Island has become a famous region where the cultivation of rice and the breeding of fish flourish.

Beside Chongming Island, there are another two islands in the Yangtze Estuary: Hengsha Island and Changxing Island. The formation of Chongming Island is closely connected with the evolution of the estuary of Yangtze River.

It is only a one-hour drive from the center of Shanghai to Chongming Island thanks to the Shanghai Yangtze River Tunnel.

At the entrance there are two decorated archways consisting of two stone pillars, simple and solemn. There are eight characters on them, saying “De Pei Tian Di, Dao Guan Gu Jin” (德配天地道贯古今, meaning 'morality for heaven and earth; doctrines for the past and now').

In front of the gate, there are two maidenhair trees, both with a history of 350 years. They are so thick that three people have to get each other’s arms around to round the tree. Two big stone lions are guarding at the gate, dignified.

The largest building in Chongming Academy is Dacheng Dian (大成殿 ‘Hall of Great Achievement’). Its role is like the Daxiaongbao Dian (大雄宝殿 ‘the Great Buddha’s Hall’) in the temples. This is where Confucius‘ statue is enshrined.

Dong Wu (' The East Rooms' at the sides of or facing the principal rooms) and West Wu ('The West Rooms') were the dormitories of the 72 outstanding disciples.

Another two buildings behind Da Cheng Dian (Hall of Great Achievement) are exhibition halls of folk-customs in Chongming. Besides, there are architectures like palace walls measuring around 25 km or 16 miles (ten thousand ren an ancient measure of length equal to seven or eight chi, about 2.33 meters to 2.67 meters) including Lingxing Gate, Dengyun Bridge, Jimen Gate, Minghuan Temple, Chongsheng Temple, and Zunjing Pavilion. These are all well-preserved architectures of the Ming Dynasty (1368–1644).

In front of their gate, there are five 18-meter tall maidenhair trees, all having a history of 377 years. They are in harmony with the 2 uniquely-designed wooden and stone memorial arches, making a strong sense of ancient elegance.

Exiting Nanmen Port of Chongming Island, continue walking 200 to 300 meters, and people will see layers of ancient architectural complex. This is Chongming Academy.

Open: 8am–4pm (Chongming Academy is not open on Monday)

Dongping National Forest Park is the largest man-made forest on the plains of Eastern China. It is also the largest forest park in Shanghai. It is a national 4A-level tourist attraction and agricultural site .

Entry: 40 RMB. Children under 1.4 meters tall can buy half-price ticket. By showing their credentials, elderly people aged above 70 can go into the park for free. Teams having more than 20 people can enjoy a twenty percent discount.

Dong Tan Migratory Bird Protection Area is a wildlife resources base at the estuary of the Yangtze River. On August 9th, 2005, Dong Tan Bird Habitat of Chongming Island was listed as a national nature reserve by the State Council.

Dong Tan Migratory Bird Protection Area covers an area of 300 square kilometers. It is one of the few habitats of certain wild birds in the world. It has been declared one of the world’s important wetlands.

In Dong Tan there are 116 kinds of birds. The number of little swans that live in Dong Tan through the winter reaches 3,000 to 3,500. There are other more rare birds like the greater white-fronted goose, striated heron, and the black-faced spoonbill. Apart from theses, the number of the migratory birds resting in Dong Tan on their way of migration is up to 3 million.

While appreciating the birds, people can see large groups of birds flying over the sky, like huge clouds.
The best time to appreciate birds in Dong Tan is in the morning, because the sunrise over the East China Sea is another beautiful natural sight of Chongming Island. Dong Tanis the most easterly land on Chongming Island facing the East China Sea.

Location: Dong Tan Migratory Bird Protection Area is in the east of Chongming Island. It begins from Tuanjie Sandbank and Water Gate in the south, and stretches to North Baxiao Port in the north. In the west, its boundary is the causeway which was built in 1968, and in the east it reaches 3,000 meters out to sea.

Jin'ao Mountain (金鳌山) is next to Shou'an Temple which is one of the four ancient temples on Chongming Island.

"There are green hills out of the green hills that circle the temple, and pavilions in the clear waters that are in the pavilion”.

However, due to the wars, invasions of Japanese pirates (operating in Chinese coastal waters from the fourteenth to the sixteenth century), sackings, etc., Shou'an Temple no longer retains its former glory. The Shou'an Temple existing now was rebuilt in 1983. There is an extremely clever antithetical couplet (a pair of scrolls containing a poetic couplet) by Zhao Puchu that reads

Zhen Hai Tower (Tower to Calm the Sea) was rebuilt in the year 1986, a nine-story tower with wooden stairs. On each story, 6 small statues of Bodhisattva are enshrined. The rooms get smaller with each floor up. The top room is so small that it can only hold one person. Standing at the top of the tower, looking far into the distance, people will have a panoramic view of Chongming Island and the East China Sea. On clear days, people can even see the sea beaches.

There once was a Guanyin Pavilion (Pavilion of Avalokitesvara). Later it changed its name to Cangha Pavilion (the Sea Pavilion). During the reign of Emperor Qianlong in Qing Dynasty, this pavilion was one of the eight famous sights of Jin'ao Mountain. At that time it was called “Aofeng Yuan Tiao” (meaning looking from Ao Peak).

Including Chongming Island in a Shanghai Tour

To include more out-of-the-way attractions like those on Chongming Island in a Shanghai tour, you will need a flexible China-based travel agent like China Highlights, that is willing to go the extra mile. Contact us to discover Shanghai your way.