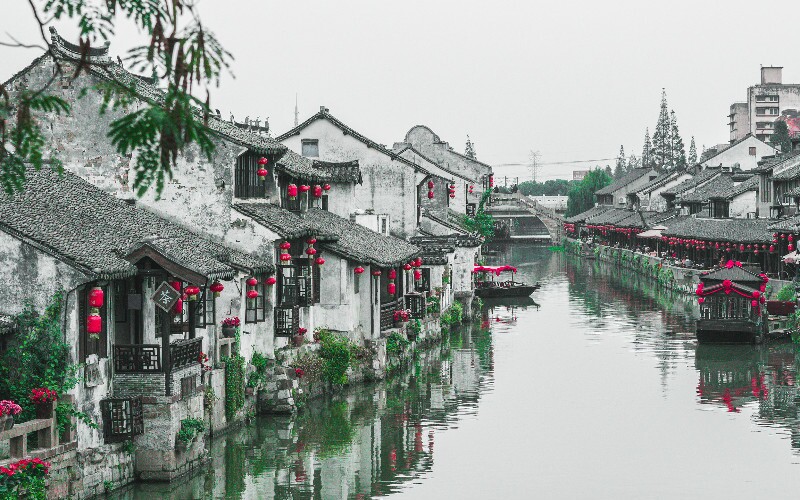 Fengjing Ancient town is a typical water town, being one of the eight new views of Shanghai. It is the best-preserved and the largest ancient water town in Shanghai. Network of water way covers the whole ancient town, and there are 52 bridges, with the oldest one: Zhihe Bridge, having a history of more than 700 years. 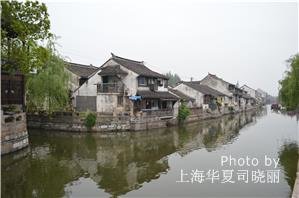 This area on the outskirts of Shanghai is about 60 kilometers or 40 miles southwest of the downtown area. It was once known as a water town because several canals cut through and around it. It was primarily an agricultural area, but in modern times it became known for its "peasant art" as Chinese peasant farmers and artists paint pictures and sell them there. There are some temples and old residences scattered around. It has become a tourist site that is popular with some tourists who want to go on a relaxing day outing.

Besides watching the farmers and painters, the attractions are the canal, the restaurants and shops. It is now a special tourist area. The area isn't big, and it isn't as developed as the more ritzier tourist old-town sites in Shanghai. This quaintness is what many tourists think is one of the better attractions of the place. Fengjing Town is a small area to wander around (about 500 acres), and the other main attractions include the artwork and the food.

You can see cartoons by Ding Cong and paintings by Cheng Shifa. There are also Jinshan Peasants' Paintings, which you can see nearby in the Jinshan area, a few kilometers away. The area caters to a lot of tourists, so you can try different food or drinks, the area’s specialties are yellow wine, Fengjing Pork, and Zhuang Yuan Cake.

The canal itself is an attraction too. At night, many hundreds of red lanterns hang on the buildings on both sides of the canal and glow in the dark. The lights and the whitewashed walls reflect off the dark waters. These make for a pretty picture, and you may enjoy a boat ride on the lake. 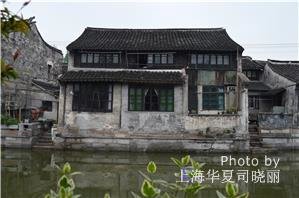 Fengjing Ancient Town has been settled for hundreds of years. Because of its position at the southwest of Shanghai between a lake and swamp area and the coast, it was considered the southwest gateway to the city. In the early Qing Dynasty, Fengjing Ancient Town was famous for cloth production. In the late Qing Dynasty, Fengjing produced bran. In modern times, painting became popular among farmers, and some of them have won national competitions. Their artwork is available for sale.

Address: Fengjing Ancient Town, Jinshan, Shanghai. 枫泾镇.
Bus: Take Metro Line 1 to Jinjiang Park Station. Then take Fengmei Line at West Meilong Bus Station, and get off at Fengjing. Or from the Jinjiang Park Station, you can take a direct bus at the Xinan Bus Station. The Fengjing Bus Station (枫泾汽车站) is about half a kilometer away.
Driving Route: Take the G60 Express at the Fenjing Exit; go to Fengjing and the parking lot of Fengjing Ancient Town. It takes about an hour to travel by car from central Shanghai.

Tours: We can arrange tours for you.