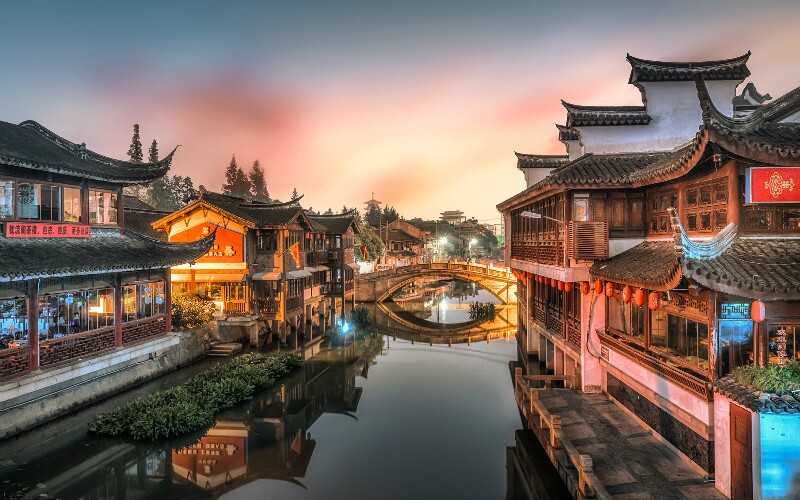 Located around 18 kilometers from downtown Shanghai, Qibao ancient town is a spiritual sanctuary, free from traffic jam, pollution, noise which now plague most of the modern cities we live. Built in the Five Dynasties Period around one thousand years ago, the town witnessed great development in the Song Dynasty and flourishment in the Ming and Qing Dynasties. Qibao in Chinese means seven treasures and the town was so named for a legend that goes that there were seven treasures around the area, which were a Gold Lotus Scripture written by an imperial concubine of the 10th century, a Magic Tree, dating back to one thousand years ago, a Big Bell Floated from Afar, a Buddha Flown over from Afar, a Gold Cock, Jade Chopstick and a Jade Axe. But according to history, only four of them-the Gold Lotus Scripture, the Big Bell, Magic Tree, Golden Cock) actually once existed, two of which (the Scripture and the Bell) have survived till today. The old street in the heart of the tiny town is the epitome of old Shanghai. The street has been restored to its original look which is consisted of two sections, southern and western lesser streets. The southern part filled with traditional restaurants serving various tasty snacks is a paradise for gourmets. Old shops selling art crafts, antiques and calligraphy works occupy the western part. In this part visitors will find the Qibao Pharmaceutical stores, a-thousand-year-old shop, some fine tea houses, and Shadow Play Opera theaters.

The old, time-worn stone roads and narrow laneswereleft by the Song Dynasty，while the temples, gardens, pavilions, houses have been well preserved since the Ming and Qingdynasties, which features black- bricked walls, elegantly decorated tiles.

Some places worth a special mention here include Cricket Hall, a place to dream times gone by, Tianxiang Restaurant which serves authentic local cuisine, Qibao Theater where you can enjoy many of the distinctive Shanghai Operas and much more.

The small town is a good place to explore Shanghai's grand past. When traveling there, watch out for the authentic flavors.