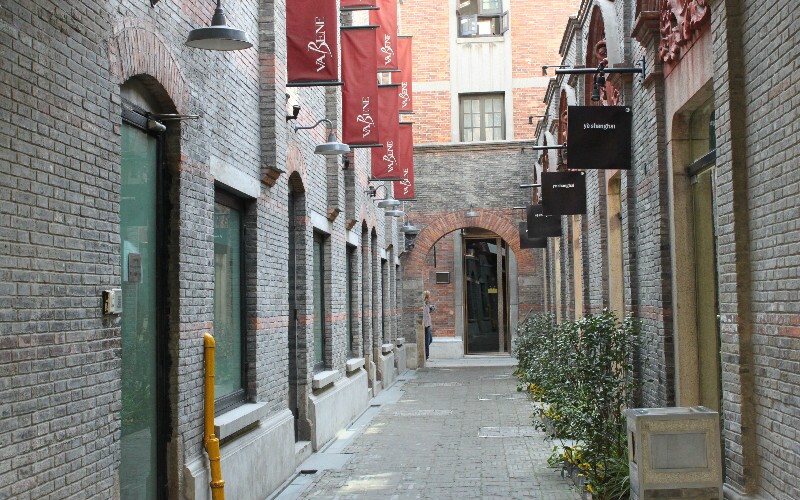 Xintiandi (Chinese: 新天地; pin yin: xīn tiān dì) is a former old city area of Shanghai’s French Quarter. It was transformed by American architect Benjamin T. Wood and the Japanese company Nikken Sekkai in the last decade. The Hong Kong developer Shui On Group revolutionized urban redevelopment planning in China when they turned the old Chinese and foreign-style buildings into a ritzy entertainment and residential area for expats and wealthy people. They did this by preserving the charming century-old style of the buildings. This allowed for open space and air that produces an environment that favorably contrasts with the noisy urban canyons in most cities. It is a pedestrian area with ready transportation via nearby metro stops. It is now a model for urban redevelopment of inner-city areas in China, and it has become one of Shanghai’s favorite entertainment districts though it is small area.

Xintiandi basically takes up two city blocks. It covers 128 acres in the center of Shanghai. It has a favorable location between the Former Residence of President Sun Yat Sen and a small park with a pond. The area was once part of the wealthy International Settlement, but the area had become dirty and run-down. When the Shui On Group took over the project around the turn of the millennium, instead of razing the area and building high-rises according to the original plan, they followed the recommendation of Benjamin Wood to renovate the buildings and streets. Each building exhibits its own unique international mix of styles. Some are more Chinese, and some are more Western.

The Shui On group spent about 170 million US dollars to renovate the whole area. They preserved many of the 19th century Shikumen-style of buildings in the northern part of Xintiandi, but modern buildings were built in the southern part. Then luxury-brand companies set up boutiques and many restaurants were built inside the buildings. Tourists are amazed at the interior décors that show that a lot of exacting detail, energy, and wealth. The area is now one of Shanghai's favorite international tourist attractions.

Xintiandi is in the center of Shanghai City and south of Huaihai Zong Lu. Its central location is part of what makes it a great area for shopping, entertainment and leisure. Xintiandi means ”New Heaven and Earth,” and it is considered a model lifestyle center. It has fast become one of the most popular areas in Shanghai for both the locals and tourists alike. The area is a great place to shop during the day, and offers a great nightlife on weekdays as well as weekends.

The South Block covers a area of 25,000 square meters (6.2 acres) and opened in the middle of 2002. The mall is a stylish glass building and has has a modern atmosphere. Here you find restaurants, food courts, cinemas and shops offering everything from fashionable clothes to accessories to ornaments.

The North Block is mostly composed of the antique and charming Shikumen buildings that are attractively designed from the inside out. In this part of Xintiandi, you find a more upscale stores and international restaurants that offer the cuisines of Brazil, France, Italy and Germany and mixtures.

The First Congress Hall of the Communist Party was made into a Shikumen Museum, and it instructs about how the local residents lived in Shanghai in early 20th century. You may taste a strong nostalgic flavor of the early days. You can also learn about the evolution and history of the area via pictures and videos in the museum. The museum is the dividing line of the north and south parts of Xintiandi.

There is always something happening in Xintiandi. Check their event calendar and promotions on the internet (www.xintiandi.com).

If you are interested in art, design and buying some art, a lot artists live in the nearby area of Tianzifang that is about is about 1.5 kilometers or a mile southwest of Xintiandi across an elevated road. You can visit various shops and studios and talk with the artists and designers. Benjamin Wood who was the main architect of Xintiandi thinks that this area of Shanghai is now a world center for art and design creativity.

The Former residence of President Sun Yat Sen is nearby. It is now a museum that instructs on him and his wife and preserves his old residence. He led the revolution that overthrew the Qing Dynasty in 1912.

China Highlights can help you customize a tour to visit Xintiandi and other highlights in Shanghai.

This Chinese Cooking class is in French concession region. The 1 1/2 hour lesson allows time to learn two or three dishes and enjoy the fruits of your labor. Seven day advance reservation is required. Tuesday Class: 10:30am - 12:00 noon; Saturday Class: 10:30am - 12:00 noon Note: Minimum group size of 6 adults. RMB40-120 cancellation fee is required if canceled within 24 hours of the class. What happens during the class? 1. Meet the teacher and taste the dish he made as a demonstration. 2. Start to cook under the guidance of your teacher. 3. Taste dishes you cook.