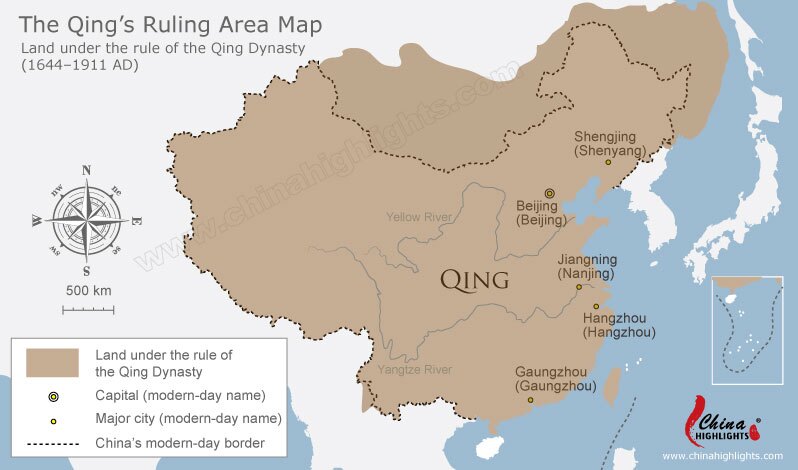 The Qing Dynasty (1644–1912) was the last Chinese dynasty, and the longest dynasty ruled by non-Han people (i.e. the Manchus from Manchuria, northeast of the Great Wall), lasting for 268 years.

How the Qing Dynasty Began — The Manchu Rise

Key Events of the Qing Dynasty

As the last dynasty of China, the Qing Dynasty gloried for a time in the prosperity of its golden age, but later it had a history full of shame — defeat in the Opium Wars, forced trade, unequal treaties, and general decline dominated the latter Qing era. Here are some important events in Qing history.

In 1645, Dorgon decreed that Ming men must shave away their hair apart from Manchu-style pigtails (queues). The queue hairstyle has been made famous by movies about the Qing Empire.

This hairstyle was humiliating, but it helped Dorgon to identify resisters. According to Confucius, we are given our body, skin, and hair from our parents, which we ought not to damage. Traditionally adult Han people did not cut their hair.

Dorgon said, "Keep your hair, lose your head; keep your head, cut your hair." Tens of thousands who resisted were massacred (decapitated).

But opinions about the queue did change over time. After 286 years people had accepted it, and when the Qing Dynasty collapsed in 1912, many people refused the new government's call to cut their queue!

The Qing “Golden Era” was made up of the reigns of three emperors:

The Kang-Qian Flourishing Age lasted 135 years. It was the last golden age of China’s feudal dynasties.

The Qing Dynasty annexed Mongolia, Northeast China, Xinjiang, Tibet, and Taiwan, establishing a territory larger than that of today's China — the largest China has ever been.

At that time, China accounted for 32 percent of the world's industrial output. Per capita grain output reached 622 kg per person in 1700.

China's population surpassed 100 million for the first time in its history and grew to 300 million, which laid the foundation for China to become the most populous country.

At the beginning of Emperor Shunzhi’s reign, the Qing Dynasty only allowed foreign shipping to enter and trade in Macau.

Due to restrictions on foreign exchanges, the Qing government missed the opportunities of the industrial revolution and gradually became divorced from the world, foreshadowing its subsequent decline.

The Old Summer Palace was destroyed in the Second Opium War.

The British launched the First Opium War in 1840–1842 during the reign of Emperor Daoguang (1821–1851). The British wanted greater Qing Empire trade, but the Qing court wanted to keep out British opium and influence.

In these two wars, Europeans easily defeated the Qing army and navy and forced the Qing to give them trading ports and Britain gained Hong Kong until 1997 under the Treaty of Nanking of 1842.

China began to become a semi-colonial and semi-feudal society. The Opium Wars also opened a new chapter in the Chinese people’s long history of resistance to (and in this case again succumbing to) foreign aggression.

The leader of the Taiping Rebellion was Hong Xiuquan. His quasi-Christian movement had some forward-thinking ideals, which the Qing Dynasty disagreed with (he banned slavery, men using concubines, arranged marriages, opium use, foot binding, torture, and the worship of idols, and he wanted women to have more equality in society).

He made Nanjing his capital, and his army seemed ready to attack Beijing. However, Britain and France sent troops to aid the Qing army. In 13 years, about 25 million people died. It is thought to be the second bloodiest war in history after WWII.

In 1900, a rebellion started among the poor, led by people who studied martial arts, so it was called the Boxer Rebellion. At first their goal was to overthrow the government and expel or kill foreigners. But Empress Dowager Cixi supported the movement secretly, so the leaders supported the Qing Dynasty.

It became an anti-Christian movement, with tens of thousands of converts killed and tortured. Then, Cixi declared war on foreigners, and the Boxers marched against the foreigners in Beijing. Foreign armies then defeated the Qing troops and the Boxers.

The Fall of the Qing Dynasty

In the face of foreign invasion and the backwardness of feudalism, many youths sought a new path to save China — revolution (overthrow the feudal monarchy and establish a republic).

In the early 1900s, Sun Yat-sen traveled around the world to organize a revolution against the Qing Dynasty. His uprising succeeded relatively bloodlessly in 1911, and Sun Yat-sen became China’s first president. The capital of the new government was in Nanjing.

Sun Yat-sen wanted to implement a republican constitution, but this never happened. Sun Yat-sen stepped down to allow a Qing general named Yuan Shikai to be president. In this way, the Qing Empire ended in 1912, and so began the turbulent Republic of China era.

Our many Beijing tours are designed to suit a variety of interests, time frames, and budgets. If you can't see exactly what you want, we can readily customize one of our advertised tour plans for you. Alternatively, we welcome you to use our tailor-made tour service.