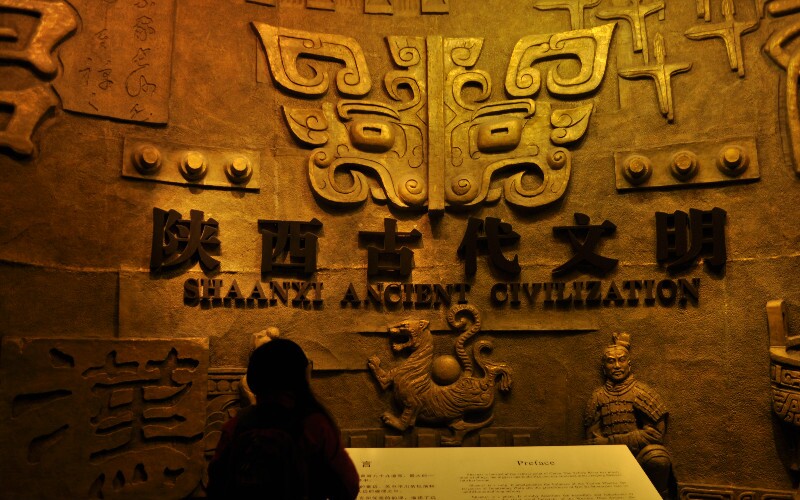 Located to the northwest of Big Wild Goose Pagoda, in the southern suburbs of Xi'an city, Shaanxi Provincial Museum is a tribute to Shaanxi's glamorous imperial past. The museum building was designed in China's grand and elegant ancient Tang Dynasty (618-907) style.

Shaanxi was an important province in China's imperial past. Xi'an served as the capital of China for 13 dynasties over 1,100 years, from 221 BC to 904 AD. It was the seat of China's first imperial civilization.

Xi'an, a place of great significance in Chinese history, is well-endowed with historical sites and relics. Now most of these relics, once scattered around the region, have found their way to Shaanxi Provincial Museum.

The Chimes Displayed in the Museum

The building covers a area of over 70,000 square meters and houses more than 37,000 historical relics excavated from all over Shaanxi Province. The collection includes bronze ware from the Western Zhou Dynasty, 3,000 years ago, terracotta figures, gold and silver ware and murals discovered in Tang tombs.

The main part of the museum is composed of three sections: the General Exhibition Hall, the Local Themes Exhibition Hall and the Temporary Exhibition Hall. If you are interested in Chinese culture, there is the option of seeing a tomb murals exhibition for an extra 150 yuan.

This hall covers 6,000 square meters and displays more than 2, 000 artifacts. The hall can be divided into three parts: the Entrance Hall, the Shanxi Local Historic Exhibition Room and the Main Room.

The Shanxi Local Historic Exhibition Room is arranged into seven small parts to separate relics from the Prehistoric Period, the Zhou, Qin, Han, Wei, Jin and the Northern and Southern Dynasties, the Sui Dynasty, the Tang Dynasty, and the Song, Yuan, Ming and Qing dynasties, with a focus on social development from the Stone Age to the decline of China's imperial era in 1840.

Many themed items reflecting Shaanxi's characteristic local culture are displayed in this hall, including the Silk Road Exhibition and the Yaozhou Porcelain Exhibition. Yaozhou (Radiance Prefecture) Porcelain comes from the Yaozhou Kiln.

The kiln was once five kilometers long, located in what is now Tongchuan (Copper River), a small prefecture in the middle of Shaanxi. It operated as one of the four main kilns in northern China from the Tang Dynasty (618-907) to the Yuan Dynasty (1271-1368). Excavations of the kiln site have yielded over 5,000 pieces of porcelain.

This hall is mainly used for temporary exhibitions from home and abroad. The most impressive exhibits here are the murals from the Tang Dynasty tombs. The murals are of great value to the exploration of the Tang Dynasty's social life and its grand culture.

The hall is under the east exhibition area of Shaanxi History Museum, covering an area of 3,800 square meters (40,903 square feet). These hundreds of tomb murals are mainly themed with the scenes of playing polo and hunting, the ceremonial scene, the pavilions, the envoys and the maids of honor in the Tang Dynasty (618–907).

All of these tomb murals are authentic works (about 0.75 cm thick) which were taken off from the walls of the tombs. Being the important materials of reflecting the society in the Tang Dynasty, they are well preserved under vacuum condition in the Tang Dynasty Tomb Murals Hall now.

Visitors can visit the hall since June 20, 2011, and the entrance fee is 300 yuan per person, which could be the highest entrance fee for a visiting spot in Shaanxi, because it is really a great difficulty to preserve the murals.

Back to Xian Travel Guide