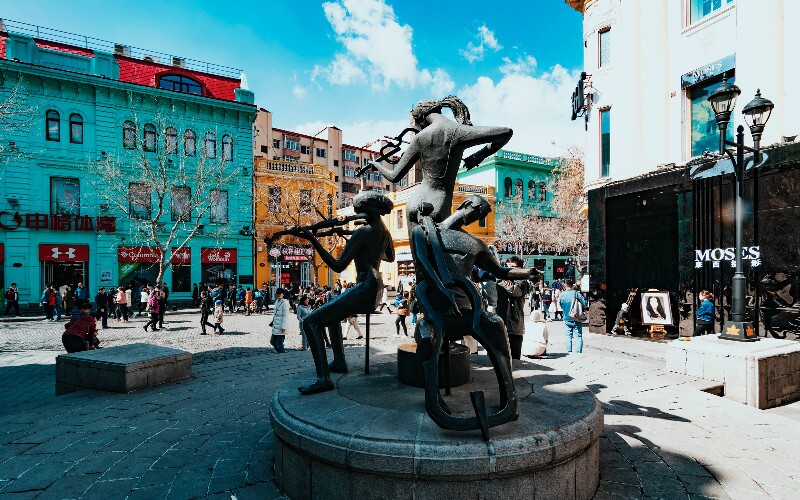 Weather: July and August are the hottest and rainiest months of the year in Harbin, but it is still relatively cooler compared with most other cities in China, and it is less rainy than most southern and coastal cities. So Harbin is a summer trip destination for many people. The average nightly low temperature is 18 °C (64 °F), and the average daily high temperature is 28 °C (82 °F).

Sixty percent of the annual precipitation falls in July and August. It rains 14 days of the month for a monthly total of 143 mm. People enjoy 8 hours of sunshine a day.

Clothing: For travelling in July, long sleeve shirts, trousers, shorts and T-shirts will do during the day, but for early morning and evening, you may want a light jacket or sweater. Bring rain gear and keep watch on the weather forecast. See the forecast for Harbin>>

Things to Do in Harbin in July

Beer Festival: The Harbin International Beer Festival is held in the last few days of June and the first week of July. Harbin has a rich Russian heritage, and this shows through in the city's favorite food and drink. About a hundred years ago, a beer industry started, and it has grown large in the last few decades. A top attraction at this time of year is the beer party in the city square. Music and entertainment is provided including pretty Russian women and dancers.

Siberian Tiger Park: A few kilometers away from the city square and across the river is a big cat preserve that is another of Harbin's favorite summer attractions. The favorite animals are the Siberian tigers. This species of tiger is the largest species of cats. They can weigh 225 kilograms (500 pounds). These animals are housed in a park about 250 acres in size along with lions, pumas, Bengal tigers and other big cats.

The breeding program for the Siberian tigers has been successful. The breeding might be a way to preserve the species from extinction since a few hundred remain in the wild. Visitors can ride in vans in their running field, walk around their fences, feed them, and try to get them to roar.

Shop and Sightsee Along Central Street Harbin Central Market: Another place to go closeby in the center of the city is this cobblestone pedestrian shopping street. It is an interesting street for sightseeing and a summer walk.

You can see old Russian buildings and buildings built by other foreigners in the whole area. It was the original city area that the Russians and the other foreigners built in the early 20th century, and there are a lot of different kinds of architecture to see.

The shopping street is more than a kilometer long (about a mile), and restaurants and stores were built in the old buildings. There are also two malls. It is a place to get Russian and Chinese souvenirs, furs, vodka, chocolate, candy, and Russian food products. It is also a place to eat a Russian meal or other types of international cuisine. Within about two or three blocks of the street are St. Sophia Cathedral, Harbin's Sophia Square, and Zhaolin Park.

July is a moderately high travel and tourism season. The beer festival and the let out of schools and universities in the middle of July for summer break means more travelers and moderately high prices for accommodations and travel to the city. Check our pages. We can help you book your hotel rooms, flight tickets and train tickets by our experience.

Harbin has relatively fewer taxis operating than most other big cities in China. So it is better not to rely on taxis. For your convenience and enjoyment, we can arrange a private driver and vehicle for you.

Our clients can design their own tour in Harbin and other places throughout China. To see these attractions or any other in China, tell us where you want to go, and we can arrange the tickets, accommodations, and travel details for you or your group.