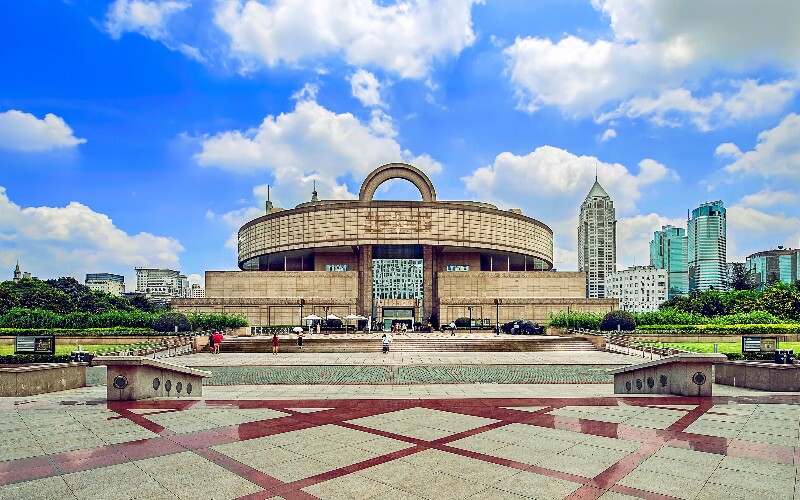 Shanghai People’s Square consists of an open square, the People’s Park and some unique architectures themed with culture, tourism and business, and it is one of the most important landmarks in Shanghai. Shanghai Grand Theatre is one of the seven main buildings of People's Square.

Now, there are seven main buildings in the square, which are Shanghai City Hall on the central axis of the north; Shanghai Grand Theatre, which replaced the former gymnasium; the metro station of the People’s Square in the northeast; three large-scale underground constructions in the southeast (an underground shopping mall, an underground substation and an underground garage); and Shanghai Museum on the central axis of the south. Just at the east of Shanghai City Hall, stand Shanghai Urban Planning Exhibition Hall, which opens a window to citizens to get know the urban planning of Shanghai. In a word, the square fully deserves the political, commercial and cultural center of Shanghai.

Especially what deserves to be mentioned is the Shanghai Grand Theatre which was designed by a famous French architect: Jean Marie Charpentier. When it is shining and glowing at night, the theatre looks like a crystal palace. The grand theatre is a 10-storey building: two underground, two above and six at ground level. Besides functioning as a show place, services with café, restaurant, VIP hall and underground garage are all available there. The advanced computer-controlled multifunctional stage equipment not only can meet the requirements of opera, ballet and symphony, but also can satisfy the world-class performing troupes. The grand theatre has really brought elegant art to Shanghai people’s daily lives. Visitors want to appreciate a performance there can call the ticket hotline: 021-63728702.