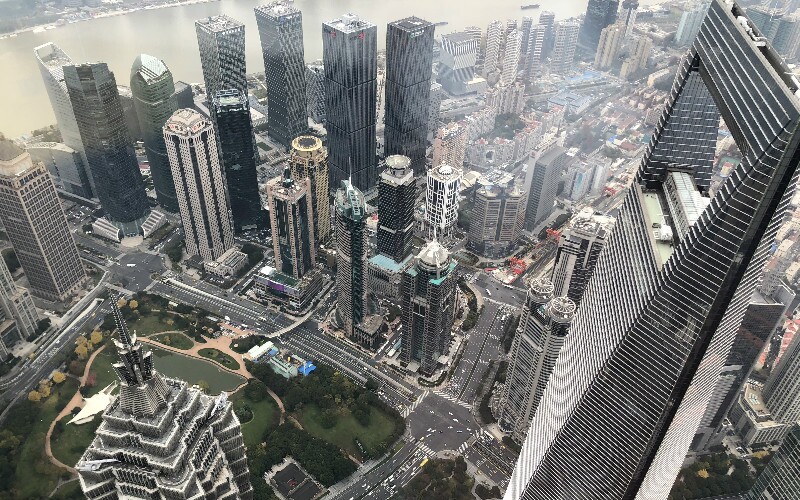 On a trip to Shanghai, a highlight is to visit is the Shanghai World Financial Center. It is the world's tenth tallest building, and the fifth tallest in Chinese mainland[2016].

The 100th floor observation deck gives one of the best views of Shanghai.

Shanghai World Financial Center from the bottom up

Until 2014, it was the tallest building in Shanghai. There is a popular observation deck on the 100th floor at 1,555 feet for sightseeing and a Hyatt Regency luxury hotel.

On a visit, you can also see nearby the 88 story Jin Mao Tower and the Shanghai Tower that towers 400 feet higher than the Shanghai World Financial Center. These three buildings sit in a cluster next to the Pudong River in the Lujiazui financial district.

The Shanghai World Financial Center project was designed by the Kohn Pedersen Fox architectural firm, and the construction was managed by the Mori Building Corporation of Japan. Multinational corporations funded the project.

It actually took the developers 11 years to finish the building. It officially opened in 2008, and it was generally considered to be the best skyscraper that was built in the world in 2008.

Part of the reason for the delay was a controversy about the opening at the top of the building. In the original design, the opening was a circle. But people objected because it looked like a Japanese rising sun symbol over the city, so instead this trapezoid shape was built. This is how it got its nickname "The Bottle Opener."

There is a mall at ground level with fine restaurants, and you'll find bars and restaurants in the Hyatt Regency between floors 79 to 93.

The 100th floor has a viewing gallery 55 meters long — the third highest observation deck in China, after the Canton Tower and Shenzhen IFC, and fourth highest in the world (the Burj Khalifa’s is highest) [2016].

Riding the elevators might be a small thrill. They move people from the first floor to 95th floor in a minute with a speed of 10 meters per second

Discover Shanghai for Yourself

The Shanghai skyline before the Shanghai Tower, when the WFC was tallest.