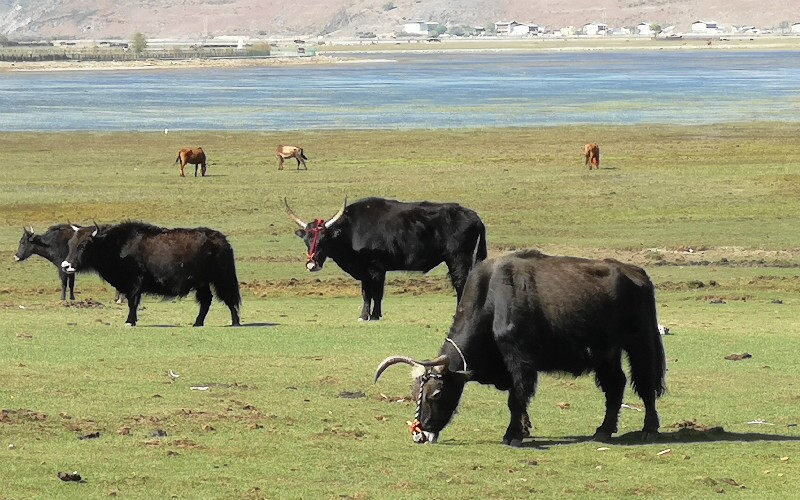 Lake Napa Wetlands, or Lake Napa Nature Reserve (aka Lake Napa), lying in the valley of a high mountain plateau situated about 3270 m above sea level and covering 660 sq km , is located about 400 km northwest, as the crow flies, of the capital, Kunming, and about 100 km northwest – also as the crow flies – of the city of Lijiang, near the village of Zhongdian (aka Shangri La), in Yunnan Province's northwestern corner.

Lake Napa is a so-called Ramsar site under the United Nations Environment Programme (UNEP). Lake Napa is surrounded to the east, west and north by tall mountains which, during winter and spring, are covered in snow.

The lake proper, which spans roughly 23 sq km , or about 2300 hectares, during the height of the runoff season (besides the direct runoff from the surrounding mountains into the lake, there are a dozen or so rivers that empty into the lake after snaking their way through the grasslands), shrinks to about 1/5 of its size (500 hectares) during late fall, though changing global climatic conditions may eventually reduce this figure even more, or increase it, depending on the direction of the change.

There are nine holes, or caverns, at the base of one of the mountains to the north of this enclosed valley, and during the peak of the rainy season, the lake often flows over its banks and the resulting floodwaters sieve through these nine caverns, then on into the nearby Jinsha River. This seasonal discharge into the Jinsha River is the only exit for the annual runoff water that descends into this otherwise closed valley.

Most of the area is marshy wetland that becomes dry from late fall through winter, but from spring through summer, the area again becomes an expansive wetland that attracts countless flocks of birds, such as the bar-headed goose – as well as a number of other species of geese – the common mallard, the Himalayan griffon, the egret and the white-tailed eagle.

In autumn, as the prairie begins to dry out, changing into a golden hue, flocks of yaks, horses and sheep can be seen grazing here, and an occasional Tibetan shepherd is also spotted. Lake Napa is one of the most majestic places in the world for horseback trekking during the dry season. Many locals will offer their horses for hire at a reasonable rate – it is a great way to take in what, at this time of year, has become a grassland instead of a wetland.

Other, manmade sites of interest in the area include Gunqin Temple Ruins, which is nestled among the tall old trees of one of the mountain peaks to the northwest. Though a ruins, the temple is still worth as visit. It is reputed to have originally been built during the Ming (1368-1644) Dynasty, then later destroyed, presumably due to the ravages of war, during the Qing (1644-1911) Dynasty.

There are a number of small to medium-sized Tibetan villages in the vicinity of Lake Napa. There you can get a close-up view of life as it is lived today in a Tibetan village. Note also that Songzanlin Temple, the largest Buddhist Temple in the area, is not far from the wetlands, such that a trip to the temple can easily be combined with your stay at Napa Lake.