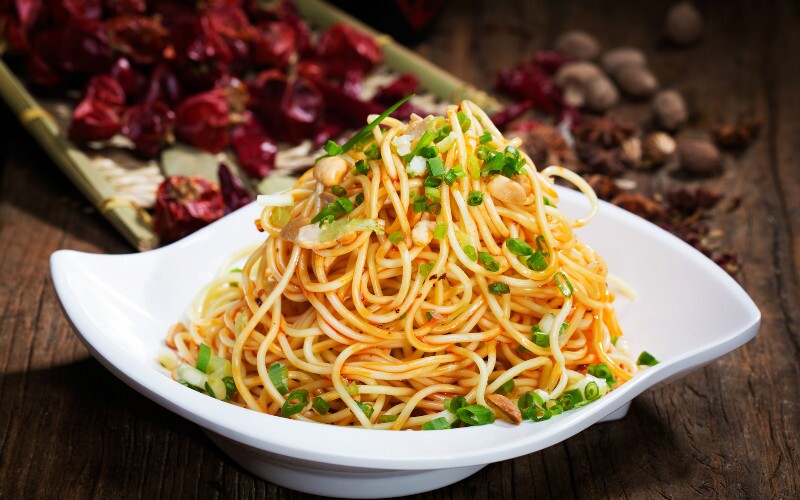 Eating and Drinking in China

Eating and drinking in China can be a mind-broadening and enjoyable cultural experience. However, there are likely to be many surprises along the way. We would like to prepare you for, and even warn you of, the main differences between eating and drinking in China and in the West. (Some of the things mentioned below you will (fortunately) not experience if you don't eat with Chinese people and stick to the largest restaurants.)

In China eating is more of a communal activity. In contrast to the West, where everyone orders their own meal, which arrives on a plate and is eaten individually, food is generally ordered dish-by-dish in China to be shared by all present at the table. Each diner has their own small rice bowl, into which food from the plates and bowls in the center of the table is placed using chopsticks, or perhaps serving spoons — a bit like a sit-down buffet perhaps.

Be prepared for your Chinese host placing food in your bowl, usually without even asking. The host will often put chicken legs or other choice parts of the meal in the guest's bowl. Though Westerners may see this as interfering with one's independence and personal space, it is a sign of hospitality in China.

Though in the West it is sometimes considered rude to put one's elbows on the dining table, this is quite acceptable in China, particularly when eating noodles. You however may want to avoid this in some restaurants where the table is only wiped with an old cloth and there may be some unseen residue from the previous patrons' meals. Using your own antiseptic wipes may help to put your mind at ease in some situations.

Chopsticks, No Knives or Forks

Using chopsticks is quite hard for some foreigners.

It is common in China for everyone to use their own chopsticks for fetching food from the dishes in the center. If you would prefer, for hygiene reasons, serving spoons and serving chopsticks can be provided for food in the center of the table.

Don't be embarrassed by using chopsticks poorly or not using them at all. The main thing is that you enjoy the food. Food is so important in Chinese culture, and the Chinese are such a practical people, that all around you will most likely be fine with whatever method you use to eat. They will be very impressed though if you can use chopsticks proficiently.

Read more about Chinese Chopsticks — Legends, How to Use Them, and Taboos.

Spitting Out the Bones on Side Plate

In China it is also common practice to spit things out on the table or the floor. In more upper-market restaurants people usually refrain and use one of the methods below rather than spitting. Often food has small pieces of bone or other inedible parts that need to be removed from the mouth. Using chopsticks, a hand or a tissue is a polite way around the problem. You might want to ask for a side plate or an extra bowl for the bones, etc. Be warned if seeing piles of things that came out of someone's mouth may put you off your food. You may want to order dishes with no bones.

Be warned that in some popular local restaurants, especially in the evenings, the noise of uninhibited chatter and drinking games can become very loud. Smoking is also permitted in most Chinese restaurants. A way round this, in larger restaurants, is to request a side room for your meal, which will have its own door to insulate you from the noise and smoke.

Eating noisily and with one's mouth open may be considered rude in the West. However, slurping, smacking the lips and leaving the mouth open when eating can be viewed as demonstrating enjoyment of the food and a friendly atmosphere in China.

Dessert — Not Common in Chinese Eating

Eating something sweet for dessert is not a Chinese custom. ("Western" restaurants often provide a dessert menu however.) Sweet things can be found hidden among everything else on a Chinese menu. Fruit salads [水果沙拉shuiguo shala /shway-gwor shah-lah/] and caramel covered apple (or other fruit) [拔丝苹果 basi pingguo /bah-srr ping-gwor/] are Chinese sweet dishes that are popular with Westerners.

There is a lot of "Western food" in China, however much of it is "fake" or low quality "Western food", e.g. gritty insipid hot chocolate. Chocolate, bread and milk particularly, apart from the most expensive products, often leave a lot to be desired. Keep your expectations low and look out for worldwide brands when buying. In restaurants portions are usually smaller than in the West (sometimes half an American portion).

Refrigerated soft drinks are widely available, but beware ice cubes made from tap water, as most tap water in China is unpotable and should be at least boiled before drinking.

Beer (pijiu, pronounced pee-jyoh) is very popular in China, but it is all very similar (about 3–5% alcohol), with none of the stronger or darker varieties brewed in the West. The other popular alcoholic drink is rice wine (baijiu, pronounced bye-jyoh). Beware, this can be very strong (40%+ alcohol).

In China, drinking alcohol is still mainly a male custom. Male guests are routinely offered alcohol and cigarettes at meal times (usually not breakfast). Just politely refuse if you don't want them. An empty glass is always refilled, no matter about protests that the guest has had enough, as a mark of politeness or good will. Often a refusal has to be given three times. See Chinese Guest and Host Customs. Maybe if you've had enough a good thing would be to leave your glass full. Getting drunk is generally not seen as a problem in China and is often encouraged.

We at China Highlights realize Westerners usually come to China to experience things you don't have at home. Our customers usually want to eat different things (that probably won't include everything China offers though!). If you want to Enjoy Chinese food and experience the eating and drinking in China, see our recommended China tours below for inspiration:

Our tours can be customized. If you are not interested in the above tours, just tell us your interests and requirements, and China Highlights will create a China tour for you.