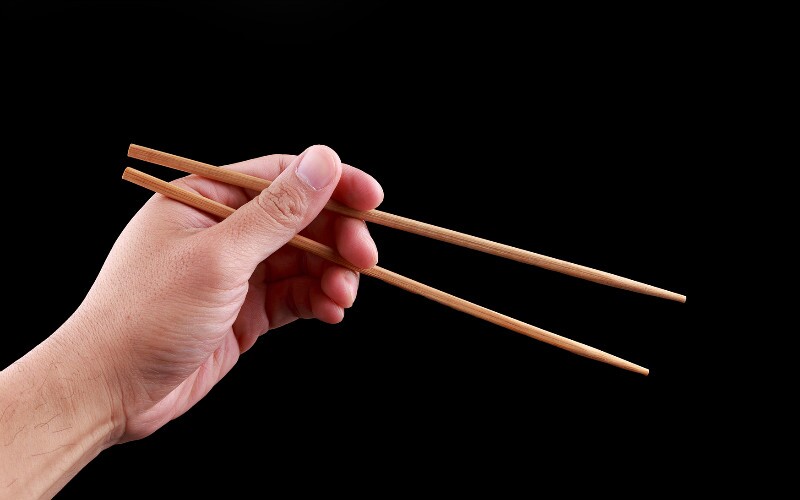 Chinese Chopsticks - Legends, How to Use Them, and Taboos

The earliest chopsticks were used in the Shang Dynasty, around 1200 BC. They were made of bronze and were used primarily for cooking. After the Han Dynasty (206 BC – 220 AD), chopsticks were used for eating, and their usage spread to other Asian countries including Japan, Vietnam, Korea, and Thailand. Nowadays, chopsticks are made of many different materials, and they have become more and more popular all over the world.

The History of Chopsticks

According to the historian Sima Qian (~145–~86 BC) in the Han Dynasty era, Chopsticks were used before the Shang Dynasty, about 4,000 years ago. Archeological analysis of six bronze chopsticks, excavated from the ruins of Yin near Anyang, Henan Province (a Shang city established around 1400 BC) concludes the earliest extant chopsticks were used as cooking tools. Before the Han Dynasty, people in the north of China used spoons to eat millet porridge, which was the main food of that time.

During the Han Dynasty, rice became the staple food, and chopsticks were used as utensils to eat rice and other foods. Spoons were also used alongside chopsticks at that time. Until the Ming Dynasty (1368–1644), chopsticks were the main eating utensils in all parts of China.

An Interesting Legend about Chopsticks

There is an interesting legend about how chopsticks were invented. It is said that Jiang Ziya (1128–1015), who was a famous military sage who assisted emperors of the Zhou Dynasty (1046–221 BC) against the Shang Dynasty, invented chopsticks…

One day, Jiang Ziya’s wife cooked some meat for him. When Jiang Ziya was about to grab the meat to eat it, a bird came flew in through the window and pecked him. He didn't eat the meat and hurried off to catch the bird. Jiang Ziya knew it was a divine bird, so he pretended to drive the bird and chased it out to a deserted hillside. The divine bird perched on a bamboo twig, and whispered, "Jiang Ziya, you should pick up the meat with bamboo fiber sticks.”

Jiang Ziya listened to the guidance of the divine bird and hurriedly picked two bamboo fiber sticks and returned home.

When his wife urged him to eat the meat again, Jiang Ziya put the two bamboo fiber sticks into the bowl to hold the meat. Suddenly, he saw the silk bamboo sticks hissing out a stream of green smoke. Jiang Ziya pretended not to know about the poisoning and said to his wife, “How can the meat smoke? Is it poisonous?” As he said it, Jiang Ziya picked up the meat and offered it to his wife's mouth. His wife's face turned white and she hurried out of the door.

After the story was told, not only did his wife dare not poison him again, but also the neighbors learned to eat with bamboo sticks. Later, more and more people ate with chopsticks, and the custom was passed down from generation to generation.

Bamboo has long been the most popular material used for chopsticks because it is inexpensive, readily available, easy to split, resistant to heat, and has no perceptible odor or taste.

Cedar, sandalwood, teak, and pine have also been used to make wooden chopsticks. Like bamboo chopsticks, wooden ones are light, functional, and easy to make… with the right wood. Some wood may rot, split, splinter, taint the food, etc. with long-term use and so is not suitable.

During dynastic times, it was thought that silver chopsticks would turn black if they met poisoned food. It is now known that silver has no reaction to arsenic or cyanide, but if rotten eggs, onion, or garlic are used, the hydrogen sulfide they release might cause silver chopsticks to change color.

Plastic chopsticks are inexpensive nowadays. But they are not popular in China as they are very slippery and not easy to pick up food with.

Jade and Other Materials

The wealthy, however, often had chopsticks made from jade, gold, bronze, brass, agate, coral, ivory, and silver. In ancient times, they were used by royal families or wealthy families. Nowadays, jade or gold chopsticks are kept as souvenirs or as art collections.

Different from other Asian countries, metal chopsticks are much more popular than other materials in Korea. Most of them are made of stainless steel. Rich or wealthy families use silver or bronze chopsticks. To get around metal's slippery nature, most Korean chopsticks have a flat side for better grip.

Compared with other Asian countries, knives, forks, and spoons are much more popular than chopsticks in Thailand, as Western cuisines are more popular there. Since Chinese immigrants introduced the use of chopsticks, many Thai restaurants today offer chopsticks for Asian cuisines.

How to Use Chopsticks

How to use chopsticks

1. Pick up two chopsticks with one hand’s fingers and thumb, holding them like a couple of pencils about two thirds of the way up from the tapered eating end.

2. Then hold the upper (movable) chopstick in the same way you would hold a pen to write (though with most of the chopstick sticking out), and let the lower (stationary) chopstick rest on your ring finger.

3. Pick up food by moving the upper chopstick and holding the lower chopstick still with your thumb and middle fingers.

4. To separate a piece of food into two pieces, exert controlled pressure on the chopsticks while moving them apart from each other. This needs a lot of practice.

When using chopsticks to eat in China, people need to pay attention to some taboos and common conventions:

1. Don't point your chopsticks (or index finger) at others. This is seen as a sign of disrespect. Likewise, don't wave your chopsticks around in the air or play with them while eating.

2. Don't knock on tableware with chopsticks: this is seen as a sign of begging.

3. Don't stir food with your chopsticks to find what you want. This is very rude (and unhygienic).

4. Don't invert your chopsticks, i.e., use them the wrong way round (to avoid losing face).

5. Never stick chopsticks into your food, especially not into rice. Only at funerals are chopsticks stuck into rice on an altar, where they look like joss sticks, also burnt on the altar for the dead.

6. Don’t suck your chopsticks. It is regarded as rude behavior.

7. Never overlap or cross your chopsticks. It is not polite to cross chopsticks when eating with others. It is seen as unwelcoming or a sign of displeasure if chopsticks are left crossed.

Chopsticks as a Gift: Meanings

Sending chopsticks to a new couple (as a wedding present) means they are a perfect match for marriage (as two chopsticks are perfectly match for one another) and it expresses hopes they will soon give birth to a son (the Chinese for chopsticks is kuaizi, which sounds like kuai zi meaning ‘quickly a son’).

Sending chopsticks between lovers means wishes for a forever love and that they will never break up or be separated.

Giving chopsticks to a teacher speaks of honesty and integrity, as well as great rewards.

Chopsticks mean eternal happiness and longevity when given to seniors.

Chopsticks given to youngsters are to wish them fast and healthy growth. The pronunciation of chopsticks (kuai /kwhy/) in Chinese is the same as the word ‘fast’.

Chopsticks can mean the keeping a long international friendship with friends.

For friends moving into new house:

When given to new movers, chopsticks mean making a fortune in the new house quickly and living happily (kuai also sounds like the Chinese word for ‘happy’).

If you want to learn how to use chopsticks during your China tour, your tour guide will teach you how to pick up food with chopsticks and enjoy your meal. See our recommended tours below for inspiration:

We have many more popular tour products and our tours can be customized. If you are not interested in the above tours, you can just tell us your interests and requirements, and China Highlights will create a China tour for you.