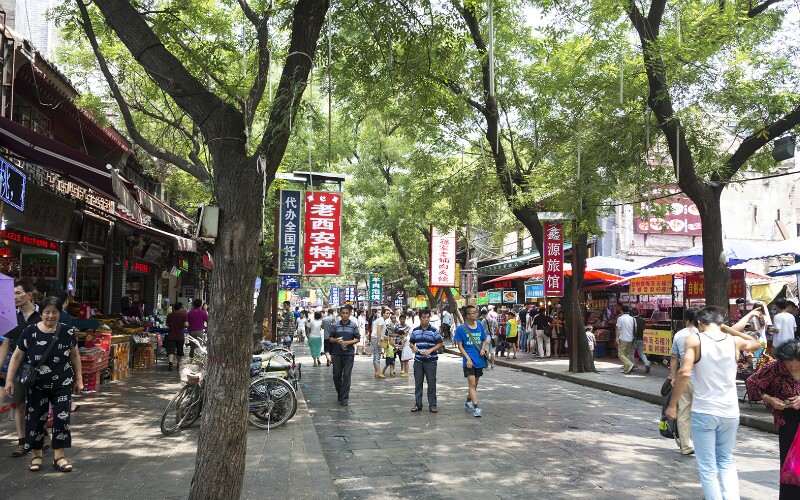 Huajue Xiang is a narrow alley located between the Drum Tower and the Great Mosque in the center of the city. The 500-meter-long winding lane is a great place to pick up souvenirs and antiques. Stalls selling a wide variety of items, ranging from local art crafts including well-embroidered cloth shoes, elegantly-carved China to these fine handicrafts originated in the far southwest parts of China like some fine arts of Miao and Dong minorities line along the street.

Most of the residents in the Huajue Xiang area are Muslims-the Hui minority group. The Hui people seem to be natural linguists. Most of the touts in the alley can speak several languages so do not be surprised when finding your shop owner fluent in English.

Although it is one of the best places to purchase trinkets, Huajue Xiang is a little more than a bustling business street. In the alley, visitors will find some historical sites including the Great Mosque, the largest and one of the most important Islamic mosques in China. The traditional Chinese styled temples, pavilions, buildings and Islamic arts, religious atmosphere in the mosque well illustrate the street's rich culture.

Huajue Xiang has a long history dating back to the Tang Dynasty over one thousand years ago. The street was originally called Ziwu Xiang. But little of the tiny lane was recorded during the subsequent dynasties. Although very little is known of its long past, one thing is certain that the narrow alley has experienced ups and downs for centuries.

A leisure stroll through the alley seeing the Muslims doing their business will prove to be pleasant and interesting. The varieties of colorful goods sold there will make a feast for your eyes.