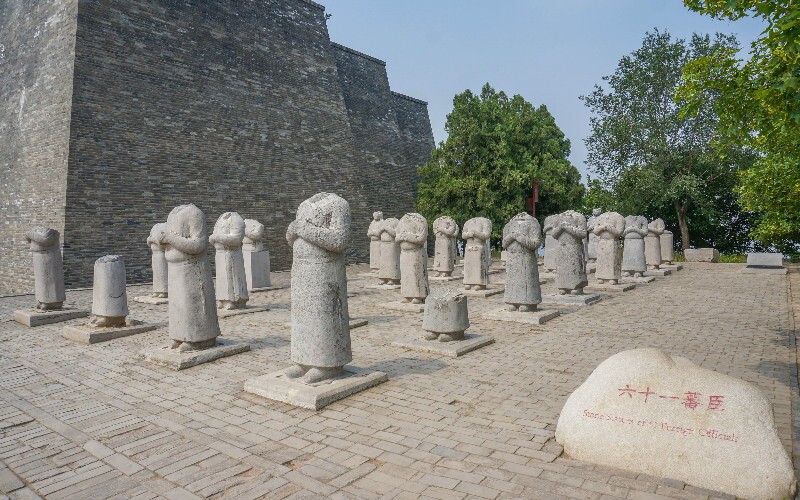 Qianling, the tomb of Emperor Gaozong and his empress Wuzetian, is located on the peak of Liangshan, some 80 kilometers away from Xian. The great mausoleum was first built in 684 and is one of the best preserved tombs among the Tang Dynasty's 18 mausoleums.

Stone sculptures scatter around everywhere in the mausoleum sites. Exquisite and elegant, these stone carvings upright on top of the mountain for over 1,200 years. The first stone sculpture encounters visitor is a pair of ornamental pillars (called Huabiao in Chinese, which can commonly be seen in front of palace complex and tombs). The tall and upright pillars are charismatic and their shafts, plinths and crown were all decorated with line carvings.

Along the sacred path, visitor will then find pairs of winged horses and rose finches. Ancient Chinese supreme rulers wanted their underground life would be prosperous so they often had propitious creatures, birds, beasts placed in front of their mausoleum to guard them.

The winged horses, wings decorated with slender, delicate lines, are in a flying gallop. The rose finches, in high relief, were beautifully shaped and sturdily carved. It is said that because rose finches were a gift from Afghanistan for the funeral and could serve as guards, a pair of them were erected in front of the tomb.

There are also stone steles. The east one, was originally erected blank following Empress Wuzetian's will which read, "my achievements or mistaking should be evaluated by the later generations, so left my stele blank". This blank tablet was 6.3 meters high, 2.1 meters wide and 1.5 meters thick.

During the Song and Jin dynasties, however, quite a few travelers did inscribe it, changing the wordless stele into an inscribed one. In the west of the "blank" stele stands the Telling the Emperor's Deeds Stele, 6.3 meters high and 1.9 meters wide. The carvings on the stele give high honor of Emperor Gaozong for his military and administrative achievements.