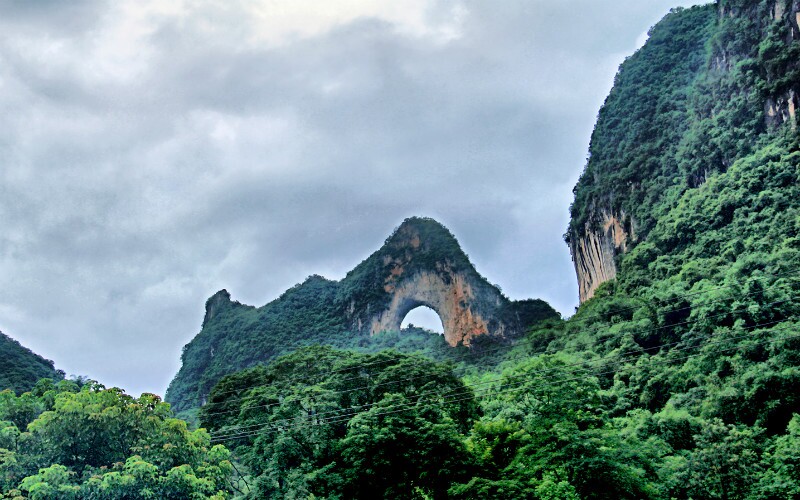 Named after its moon-shaped hole, Moon Hill is one of the highlights of Yangshuo’s countryside. As surely as Elephant Hill is the most iconic among Guilin’s hills, Moon Hill is Yangshuo’s icon.

Moon Hill  is a huge piece of rock with a moon-shaped hole in its center. The 800 marble stairs called "Appreciating Moon Path" can lead you to the top of the hill and to get a close view of the Moon Cave. Like most karst caves, there are lots of peculiar shaped stalactites hanging on the ceiling of the Moon Cave. Some are like Buddha’s warrior attendants, some like the goddess of the moon and some like jade rabbits. When cycling passed Moon Hill, with the change of viewpoints, the Moon Cave will take on the different looks of a "full moon", "half moon" or "crescent moon".

Moon Hill is also an great place for rock climbing. With 14 rock climbing routes on the north-west side, Moon Hill offers plenty of challenges for both amateur and professional climbers.

The moon-shaped hole measures 50 m wide and 50 m tall, under the arch of which are stalactites of various shapes. One of the stalactite resembles the jade rabbit (the mythical character that is said to sit with Chang’e in the moon palace — see Moon Festival Legends).

The walk up to the hole is on about 1,000 stone steps (15–20 minutes’ walk). The summit is a further 10–15 minutes' climb on a rough mountainside path. The scenery from the half moon, or better still the summit, is well worth the trek. It is the best you will get in the area with easy access.

The best time to visit Moon Hill is in autumn, as it is drier, and the temperature is mild. If climbing the hill in the summer, early morning and late afternoon are less hot.