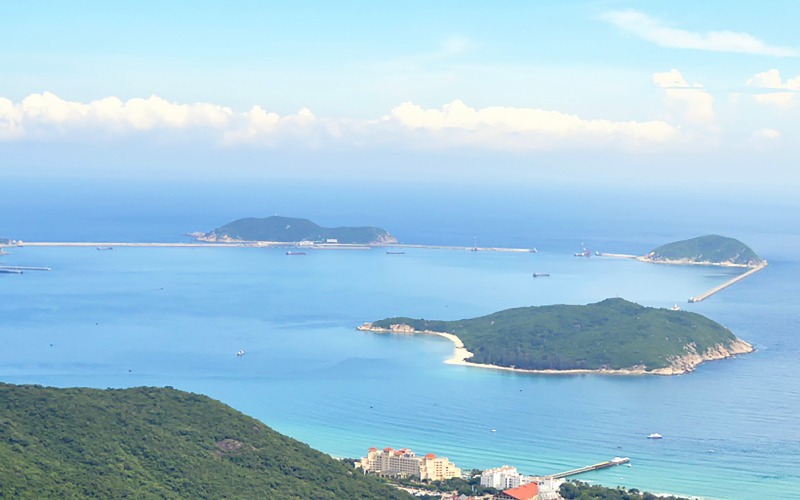 Hainan Airlines is the first airline in China to be ranked as one of the seven 5-star airlines in the world by Skytrax and corresponds to a total of 3,000,000 accident-free flight hours since the airline's establishment in 1993.

Hainan Airlines, with its main hub in the Hainan Island city of Haikou, is the fourth largest airline in China (it has just recently surpassed Shenzhen Airlines, the former fourth largest airline in China) measured in terms of fleet size – which is a rough approximation for all of the other measurement parameters associated with an airline such as the number of passengers carried, the number of routes and destinations served, the number of flight hours flown, etc. – behind its main competitors, China Southern Airlines (1st), Air China and China Eastern Airlines. HNA Group, the parent company of Hainan Airlines, holds a controlling interest in both of Hainan Island’s two main airports, Hainan Meilan International Airport (HAK) and Sanya Phoenix International Airport (SYX).

Hainan Airlines is the first airline in China to be ranked as one of the seven 5-star airlines in the world by Skytrax, an independent research and consultancy firm serving the airport and airline industry that is also the industry's largest review and ranking site. Though it may not be the largest, Hainan Airlines is one of the most popular airlines in China, renowned for its premium service, its outstanding on-schedule flight record and its impressive accident-free record.

During the course of 2011, Hainan Airlines' accident-free record will have been maintained for a period of 18 consecutive years, or since the airline's establishment in 1993, corresponding to a total of 3,000,000 accident-free flight hours. In addition, for the past 10 years, Hainan Airlines is credited with having achieved one of the industry's highest on-schedule flight records, and since the year 2005 – or for the past 6 years – Hainan Airlines' on-schedule flight record has improved at an accelerating pace, a development in which the airline can justifiably take great pride, as it is, above all, a mark of the sincerity of the airline's commitment to its passengers.

The Hainan Airlines logo is a stylistic rendering, in yellow – and on a red background – of the golden Peng, a giant bird belonging to Chinese mythology that symbolizes great accomplishments.

Hainan Airlines currently operates a fleet of 122 passenger aircraft, including the Boeing 737 and 767 and the Airbus A320, A330 and A340, as well as the Dornier 328. But further expansion is already in the works, for Hainan Airlines’ order for 40 Boeing 787 Dreamliners – the long-range, modest-capacity passenger jetliner whose maiden flight between Tokyo and Hong Kong recently took place (October 26, 2011) – will soon begin to arrive.

Moreover, in addition to its normal scheduled flights to major international cities, Hainan Airlines also offers special charter flights from Beijing to the following international destinations: Novosibirsk, Phuket Island, Seattle, Toronto, St. Petersburg, Moscow, Berlin, Brussels, Budapest, Cairo, Dubai, Khartoum and Luanda. As well, the following special charter flights are offered: to Brussels from Shanghai; to Astana from Urumqi; to Seoul from Sanya; to Bangkok from Beijing, from Haikou and from Hangzhou; and to Singapore from Dalian, via Hefei, Anhui Province, about 150 kilometers west of Nanjing, Jiangsu Province.

The addition of the Boeing 787 Dreamliner to Hainan Airlines’ fleet of long-haul jetliners will benefit the company’s passengers – both those on charter as well as on scheduled flights – who prefer to fly non-stop.

Though Hainan Airlines has yet to join a global airline alliance (it has expressed an interest in possibly becoming a future member of Oneworld), it nonetheless has Codeshare agreement with the following airlines, which greatly extends the international reach of Hainan Airlines:

Each ticketed passenger is limited to one piece of carry-on luggage which should not exceed 10 kgs in weight and 115cm in overall linear size/ summed dimension limits (Height + Width + Depth). All carry-on luggage must be stored either in an overhead bin (compartment) or beneath the seat in front of the passenger’s own seat.

Economy class passengers traveling to international destinations other than to the USA may take a single piece of carry-on luggage per person, where the total weight and dimensions (Height x Width x Depth) is the same as immediately above for first and business class passengers, where the same caveats also apply.

1: Note that besides the single piece of carry-on luggage, each ticketed passenger may carry on board additional – albeit, within reason – hand-held (or in a plastic bag) personal items such as a purse, a briefcase (including a laptop computer), an overcoat, a raincoat, an umbrella, a walking stick, etc., and of course a reasonable amount of reading material for the flight in question.

Infant passengers are granted a free checked luggage allowance of 10 kgs, in addition to an optional checked baby stroller or cradle, also free of charge.

Infant passengers are granted a free Checked Luggage allowance of 10 kgs, in addition to an optional checked baby stroller or cradle, also free of charge.

Since the specific limitations on international domestic flights vary from continent to continent (and sometimes within continents), please consult Hainan Airlines' official web site for Checked Baggage, to be on the safe side (see the link at the bottom of this section).

Hainan Airlines serves two kinds each of Western and Chinese dishes for first and business class passengers, as well as desserts and beverages. The airline serves standard– but exciting and tasty – internationalized Chinese fare for economy class passengers, with beverages such as juice, coffee, hot or cold water, and tea. On the routes Beijing – Xi’an and Haikou – Beijing, special meals for children are served, with no reservation required for this. On the other hand, passengers who have special dietary needs such as vegetarian and/or "religiously correct" foods (halal, kosher, etc.) should make reservations for this no later than 48 hours prior to departure.

Passengers who will be bringing their own wheelchair on the flight, as well as passengers who will require a complimentary airport/ in-flight wheelchair, must purchase their tickets at least 48 hours in advance, at which time they must present a health certificate – issued by a physician within 72 hours of their flight's departure – that certifies that the bearer is healthy enough for air travel, and at which time they must make the reservation for the complimentary wheelchair. Own wheelchairs may be checked in the usual manner on the day of departure, together with Checked Baggage.

Pregnant Passengers in their 34th to 36th week of pregnancy are required to present a health certificate – issued by a physician within 72 hours of their flight's departure – that certifies that the bearer is healthy enough for air travel. For similar health reasons – and in keeping with international practice – pregnant women beyond the 36th week of pregnancy may not travel on Hainan Airlines flights.

The frequent flyer program of Hainan Airlines is called Fortune Wings Club. Though Hainan Airlines has not yet joined a global airlines alliance (it is contemplating joining Oneworld), HNA Group, the parent company of Hainan Airlines, owns a number of subsidiary airlines such as Hong Kong Airlines, Hong Kong Express (Hong Kong Express Airways), Lucky Air, and China West Air. In addition, Hainan Airlines has Codeshare agreements with a number of alliance-affiliated airlines, as indicated in the "Fleet and Destination" section above, which agreements mean that Fortune Wings Club members earn frequent flyer miles also when they fly with these airlines.

The staff at Hainan Airlines – from the ground and baggage handling crews to the airline's check-in personnel to its flight crews, including its pilots – all welcome you to take an unforgettable journey with Hainan Airlines – Bon Voyage!