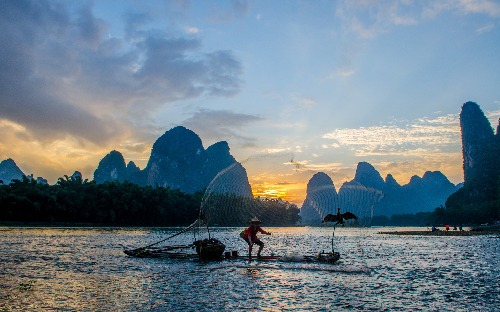 Guilin Railway Station
Known by local residents as the South Railway Station, Guilin Railway Station is a mixed station with bullet trains and ordinary trains in downtown Guilin. Few trains begin their journeys here, but the station mainly runs ordinary trains to almost all major cities. It is quite convenient for passengers, especially if you are going northwards to Beijing, eastwards to Guangdong/Hong Kong or southwards to Nanning/Vietnam. Note:A small bus area in front has frequent buses to Yangshuo and Longsheng.

Guilin West Railway Station was started building in 2011, is located in Dingjiang Town, Guilin and far away from downtown. It is the intermediate station of Guangzhou - Guiyang line, mostly serving high-speed trains to and from Guangzhou and Guiyang. Currently, there are only 2 buses to Guilin West Station - No. 22 and No. 302.