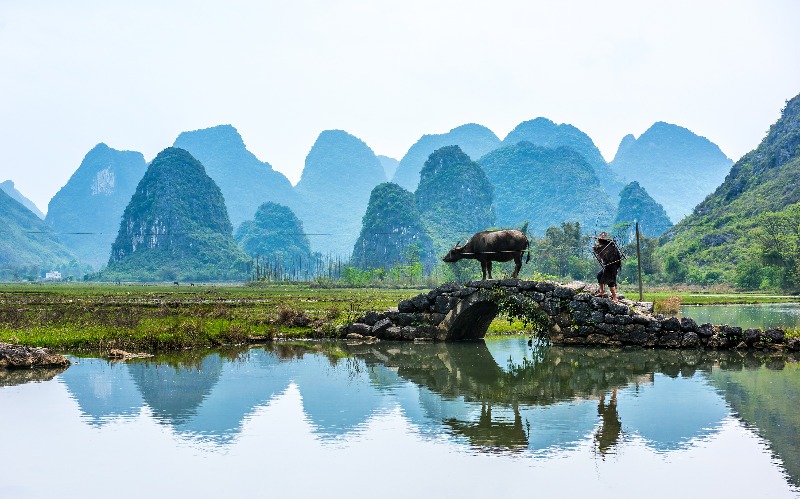 Guilin West has the most trains for Guangzhou of any Guilin station, so you are more likely to get a ticket. You can change there for Shenzhen North.

Change in Guiyang for trains to Kunming, Chengdu, and Chongqing. You can now get to Kunming faster via Guiyang than via Nanning. The opening of the Guiyang–Kunming HSR around the the start of 2017, should bring the journey down from around 12 hours to around 8 hours.

From the Minority Townships

There is now the option to take a train to Yangshuo Station (from Guilin), BUT trains don't go to the popular tourist town area. "Yangshuo" Station is a small station in the mountains, 6 km east of Xingping (which is renowned for the cream of Li River karst scenery).

See Yangshuo Transportation for more information about the relative merits of Yangshuo Station and how to get from there to the town of Yangshuo.

Bullet trains: Fewer bullet trains leave from Guilin Station and Guilin North for Guiyang, Yangshuo, and Guangzhou, but they do have high-speed trains north and south as well, to places like Nanning and Beijing.

The regular trains lines spread out to the rest of China from Guilin and go to most places. They take two or three times as long as bullet trains. See Guilin North and Guilin Station for conventional train information.

If you are touring Guizhou and its minority areas, you may want to go direct to Yangshuo Station.

Guilin West is a simple, quiet station, so waiting lines and navigating the station aren't usually issues due to its limited usage. There are only two ticket windows, so it might be better to get your tickets elsewhere instead of possibly waiting on busy days.

See these pages for more on using China's railway stations:

Beware the private cars / hawkers: Foreigners are a particular target for people waiting with private cars offering transport partly because they are easy targets for scams and perhaps crime. It is best to avoid them and take regular metered taxis or the bus, or hire a reputable private driver in advance. Also beware tour hawkers and other hawkers at the station for the same reason.

Taxis can be caught outside. See the lowdown on Guilin Taxis.

Be sure you book the right tickets since like most Chinese cities, there are several train stations with similar names. You could book tickets at any train station, at city ticket windows, or online. How to Buy Tickets in China.

If the Guilin West Station's public transport doesn't sound like the way you would like to go around, China Highlights is based in Guilin and can help.

Private drivers: Hiring a private driver might be the best option, saving your time and maybe even money. It is the most comfortable and pleasant way to travel.

But pick a reputable and knowledgeable company like China Highlights. You can arrange for our driver and guide to wait for you. We are known for providing individualized services for our customers.

You can expect the best personalized private tours with us. We can arrange everything from transportation to your flight tickets and visa to China.