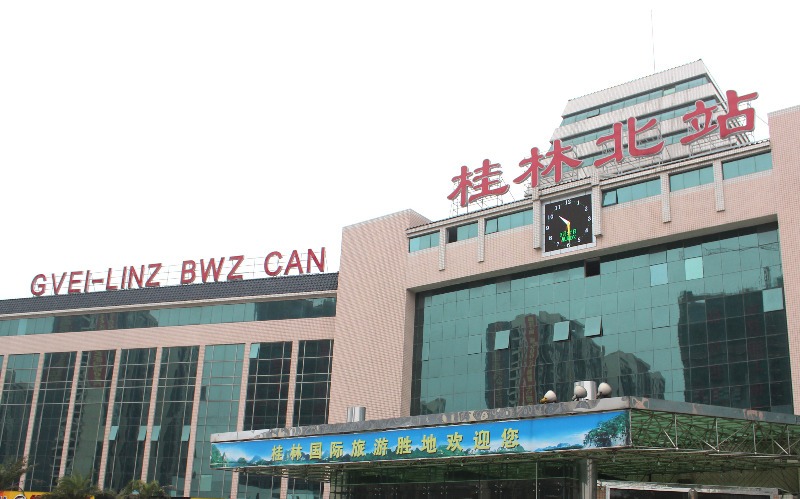 It also serves southward bullet trains and regular trains, though more-centrally-located Guilin Station is better for these.

For bullet trains north/south go to Guilin Railway Station. Ordinary trains run to the same places (from Guilin and Guilin North) plus north to most major cities: Changsha, Shanghai, Beijing, Chengdu, etc., but they take two or three times as long.

There is now the option to take a train to Yangshuo, BUT trains don't go to the popular tourist town area. Yangshuo Station is a tiny station in the mountains, 6 km east of Xingping (which is renowned for the cream of Li River karst scenery). This means it's still quicker by bus from central Guilin to West Street. See more on Yangshuo Transport.

The Gui-Guang HSR has open up the fascinating minority areas of Guizhou with four stations in popular Miao and Dong minority areas. For more see Guangzhou to Guiyang HSR.

Guilin West Railway Station has 40 trains, so you are more likely to get a favorable journey time from there.

Guilin Station has 19 bullet trains to Nanning and Nanning East, and Guilin Station is far closer to the city center, so it is the far more convenient option for southbound (and northbound) travel. Change in Nanning for overnight trains to Kunming.

Guilin North is a medium sized Chinese station, newer, and less convenient than Guilin Station a kilometer south of the city center. The modern design helps make travel easier. There is a big square outside with shops and eateries around it.

To find your waiting section, you should check the ticket and follow the LED screen which tells you the exact place for waiting and ticket checking.

For luggage portage, ask the help and information desk staff for porter help getting your luggage on the platform (about 10 RMB/piece).

For luggage above 20 kg, at the right side of the entrance on the ground floor, there is a Luggage Consignment Service (行李包裹承运处).

See How to Get On/Off a Train and 7 Things to Know Before Riding a Train, and Differences Between Chinese and Western Railways for more.

The ticket office is at the north side of the station building, with over 15 counters (usually only about three are open for buying and collecting tickets, however, and lines can be as long as half an hour). There is usually one counter open for refunds and ticket changes to the left of the long ticket queues. It's open from 7am to 11pm, with some counters at break during noon time. See the page foot for more on booking tickets.

Automatic ticketing machines are at the southwest corner, but only available for Chinese-ID-card-holders.

Taxis can be caught north of the station on the access road (Jinhe Lu). Make sure your say Huoche Bei Zhan (火车北站), as there is also a nearby Guilin North Bus Station, when using taxis. A taxi to the city center costs about 30 yuan. See the lowdown on Guilin Taxis.

Buses are available from the east side of the station square.

Many cities, like Guilin, have more than one station. Be sure you're booking the right tickets. You could book tickets at any train station, city ticket window, or online with the Chinese railway website. See How to Buy Tickets in China.