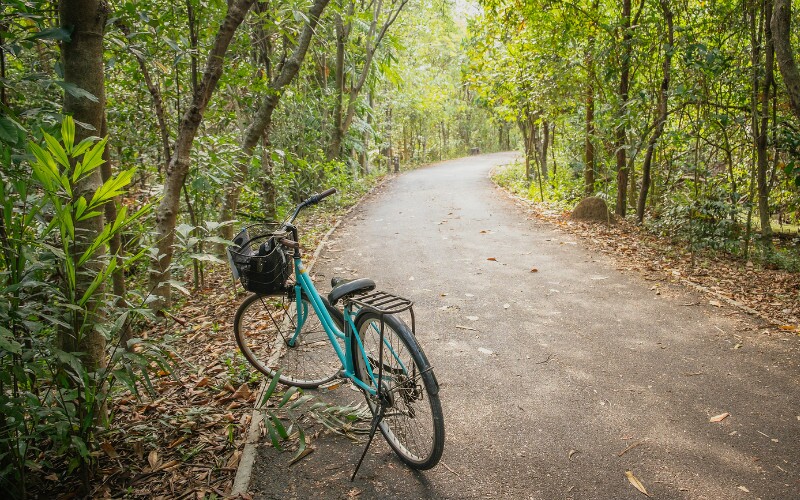 These best routes are in widely separated areas: Lantau Island, Lamma Island, Hong Kong Island, and one of the best park areas around Tai Mo Shan north of Kowloon.

Unlike China, Hong Kong didn't have a lot of people riding bikes for transportation in recent decades. Up until about 5 years ago, expats were the main riders on the dirk mountain bike tracks. Chinese did not have a mountain biking and dirt bike sports interest that became popular in the US in the 1970s.

But now biking has taken off in a big way among the locals. In 2010, a Hong Kong resident won the Asian Games mountain biking event, and this has helped to spur more interest in mountain biking around Hong Kong. So you are likely to see Chinese riders during your ride.

- The Most Popular Mountain Bike Route

The allure of this route is going downhill on Hong Kong's highest mountain through beautiful country, woods, and scenery. It is a lot of fun for many people, even teenagers and kids around age 10. It is famed among local bikers because it is a long route, and skilled teenagers can do the route if they are careful. Because it is downhill, it exert themselves much. If people go slowly and carefully on their bikes, there isn't much exertion. It is like a roller coaster ride (all downhill though).

People like biking fast down Tai Mo Shan. If you are not very skilled at mountain biking, go slowly and keep control of your descent, and watch out for faster riders and get out of their way. Going uphill is too strenuous.

Getting there: You can load bikes on taxis to get to the start at Twisk Road, but China Highlights' tours can help plan and facilitate your trip and arrange the transportation, driver, and etc.

Lamma Island is known around Hong Kong for its great mountain bike tracks developed by local bikers themselves. These extensive tracks are so good that bikers are considering it as the site for international competitions.

Lamma, like other islands of Hong Kong, doesn't allow cars. So the islanders have a biking culture that might be unique in Asia since probably few places in Asia restrict vehicles. You'll love it if you love biking for exercise and sightseeing and for mountain bike adventure. You can bike anywhere you want on the streets and on the roads, on the walking trails, and off trail in extensive dirt path networks.

Locals also know of the Family Walk as a great pedestrian walk across the island. This paved path is one of the best in Hong Kong. For riders, the path provides interesting local culture, good food, and an environment for families.

The beaches of Chi Ma Wan peninsula, Mui Wo, and Pui O and its beach are major attractions for bikers. Pui O is laid back, and Mui Wo has restaurants that make for good meals at the beginning and end of a bike trip. The easy access to this track by ferry from Central and the bike rental places in Mui Wo make this a favorite biker area. But the trail can be dangerous, especially in wet weather. The rocks stairs are problem for many.

From the Mui Wo ferry, go left past McDonalds. Following the shore and the coastal road, go about 400 meters and keep looking to your left for steps going upwards across from an industrial plant. These stairs are the beginning of Lantau Trail Section 12. Walk up about 60 steps, and follow the concrete path left. It turns into dirt track.

The scenery gets amazing. Go over a tiny brook and then back up. You'll come to a long rise with a wide rutted dirt track. Go up. At the top of the rise, the trail splits. The distance from the stairs to this point is about 1.5 km.

The tail to the right is the Lantau Trail, but the trail to the left goes sharply down. It gets steep and rocky, so go carefully and you might have to walk your bike down.

Go across the beach, and you'll find a concrete path at the far end. Ride this for 1 km. Go to where the path crosses a bridge and turn left on the road and ride towards the prison.

Go across the beach, at you'll find a concrete path at the far end. Ride this for 1 km. Go to where the path crosses a bridge and turn left on the road and rides towards the prison. Watch out for cars.

Above the prison, you will see a round water tank and the main prison gates. Go around the gates and take the road. Turn right onto the track and continue up to a dam. Cross the dam and climb the steps to ride on a wide dirt trail. You can then either go straight and ride the Chi Ma Wan Extension Trail or turn right onto the regular trail.

Chi Ma Wan Extension: 5 kilometers of rugged track with many stairs you'll probably have to walk.

Rental bikes: Shops in Mui Wo on Lantau have bikes for rent. Prices start at HKD $30 a day for ordinary bikes. Good mountain bikes can be rented for $150 per day.

Getting there: You can load your bikes on the slow ferries that leave every hour or two hours from Central Pier 6. The trip to Mui Wo takes about an hour.

Going back: The Chi Ma Wan Trail touches Chi Ma Wan Road. You can take it to South Lantau Road, and take a taxi or bus back to Mui Wo. It is a strenuous ride up the hill, and many ride back to Mui Wo, but traffic might be heavy depending on the time of day or day.

The allure of this route is to bike through one of Hong Kong's most scenic hiking routes that doubles as the only officially designated mountain bike route on Hong Kong Island. The route goes through beautiful country, woods, and scenery. You can see Shek O bay and the view of the sea on both sides of the ridge.

There are sharp drops on both sides of the ridge in some places, but brush and trees on both sides help protect against an accidental fall downwards.

It is a lot of fun for many people, and since it is mostly level or downhill, it isn't as strenuous as the other routes.

From the Tai Tam Gap Correctional Institution, climb up the steps and then ride uphill to the trail. The trail is marked.

Then follow the Contour Trail southwards. It is fairly straightforward, flat, and easy going. Enjoy the scenery.

At Wan Cham Shan, take the left route for Dragon's Back. The track to the right is the Contour Trail that is easier. However, the scenic ridgeline track has steps and steep slopes. Go carefully. At the end, go down to the Contour Trail and take it down to Shek O Road.

Getting there: Some people bike up from Chai Wan to start the Dragon's Back going south to north. Others ride up Wong Nai Chung Gap and up Tai Tam Road to the correctional facility. But both ways up exhaust most people before they even start the mountain bike track. The easiest way is to take a taxi or one of our China Highlights' drivers to the correctional facility.

Going back: You can ride down Shek O Road, take a taxi, or arrange with us for a driver.

The other four mountain bike tracks are rugged dirt paths and park trails and are difficult. The Olympic Trail is a technically easy route that kids, older people and families can enjoy. All of it is paved, and there is only one section where people should dismount to go up or down the stairs.

The scenery is great, and the Olympic Trail takes people across Lantau between the MTR station in Tung Chung and the pier at Mui Wo. Easy access and departure by ferry or MTR makes doing the ride more enjoyable. There are also bike rental places in Mui Wo.

Food: While in Tung Chung, you might want to check out the CityGate Outlets above the MTR station. It is known for economically priced food at the food court.

Water: Buy drinks at Mui Wo or Tung Chung because there are no stores along the rest of the route. There are public bathrooms at Tai Ho Wan and at Mui Wo near the Silvermine Waterfall and near the pier where you can get drinkable water for free.

Two routes in Mui Wo: At the Silvermine Waterfall, be careful about pedestrians on the path. Immediately past the waterfall area, there are two routes you can take to the Mui Wo pier. One is the sharp left paved path going down an incline. It goes through shady and mostly empty parkland much of the way and then goes to a big beach.

The other way allows you to see the locals' apartments and Chinese houses and to see a lot of of the Mui Wo village valley scenery. Both ways go to Mui Wo pier.

Mui Wo: Simply take one of the slow ferries that leave from Central Pier 6 about every one and a half hours or so. You can walk your bike on the ferry. If you want to rent a bike, it is best to rent one in Mui Wo.

Tung Chung: There is no slow ferry to the Tung Chung area, but you can put your bike on the MTR (on the first or last car) if you remove the front wheel before you get on. The staff would prefer if you put the wheel or both parts in clean sacks.

Bike rental: There are bike rental shops in Mui Wo where you can rent bikes. Prices range from 35 HKD for regular bikes to 200 HKD (26 USD) for a mountain bike per day.

Crowds: This route is so popular that it might be too crowded on weekends and holidays. So it is best to go on weekdays.

China Highlights can arrange and facilitate bike tours in Hong Kong and other areas of China.

Let us help you design your own tour of Hong Kong. We can help plan and arrange your biking adventures. Tell us your ideas.

See our full spectrum of tours.

Read more about mountain biking and scenic riding in Hong Kong. There are good road bike routes suited for older people, children and families. See below.