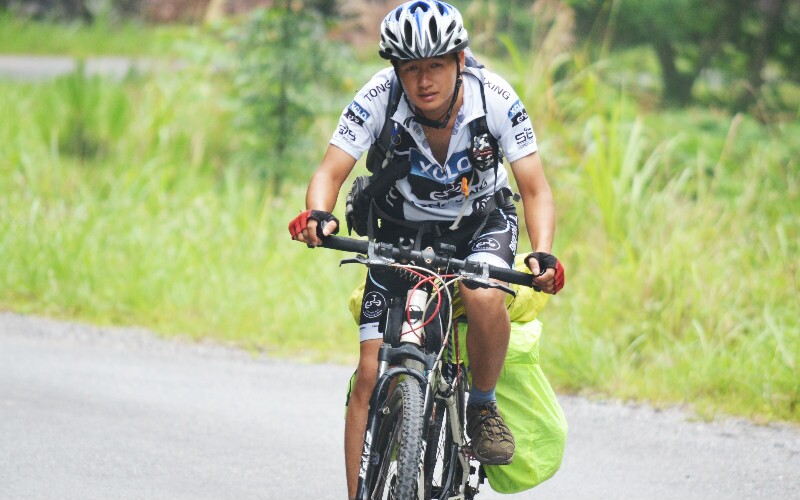 There are Hong Kong's five best cycling routes ranging from rugged mountain biking to pleasant urban cycling. Here is a range of 5 good choices for everybody from the skilled mountain bikers to the most casual bicyclist and families with children.

These five popular routes go through undeveloped tracks, scenic parkland on paved biking and pedestrian paths, and urban residential areas and parks. They are about the best choice in Hong Kong for each of these three kinds of biking and are suitable for everyone from the best mountain bikers to seniors on touring bikes.

Start of a Big Biking Culture in Hong Kong

Unlike China, Hong Kong has not had a biking culture in recent decades. The terrain is too hilly and rocky, and the city is too tightly congested and crowded with vehicles to allow for much biking. Chinese also have not have a mountain biking and dirt bike sports interest that became popular in the US in the 1970s.

But now biking has taken off in a big way among the locals, and biking and cross country biking has always been popular with expats. In 2010, a Hong Kong resident won the Asian Games mountain biking event, and this has helped to spur more interest in mountain biking around Hong Kong.

Choices of Terrain and Scenery

Urban, residential: A few of the smaller cities and villages such as Sha Tin have prepared bike paths, and these have become quite popular. These go through scenic areas, along the shore, and through urban parks.

Islands: Biking has always been one of the main methods of transportation on many of the islands such as Lantau and Lamma that prohibit vehicles. A problem in some of these places is that more vehicles have been allowed in certain towns and roads.

The allure of this route is going downhill on Hong Kong's highest mountain through beautiful country, woods, and scenery. It is a lot of fun for many people, even teenagers and kids around age 10. It is famed among local bikers because it is a long route, but even kids can do the route if they are careful. Because it is downhill, it is suited for skilled mountain bikers who don't want to exert themselves much. If people go slowly and carefully on their bikes, there isn't much exertion. It is like a roller coaster ride (all downhill though).

People like biking fast down Tai Mo Shan. If you are not very skilled at mountain biking, go slowly and keep control of your descent, and watch out for faster riders and get out of their way. Going uphill is too strenuous.

Lamma Island is known around Hong Kong for its great mountain bike tracks developed by local bikers themselves. These extensive tracks are so good that bikers are considering it as the site for international competitions. Locals also know of the Family Walk as a great pedestrian walk, one of the best in Hong Kong. It provides great scenery for bikers, interesting local culture, and good food and an environment for families.

Lamma, like other islands of Hong Kong, doesn't allow cars. So the islanders have a biking culture that might be unique in Asia since probably few places in Asia restrict vehicles. You'll love it if you love biking for exercise and sightseeing and for mountain bike adventure.

This island is a favorite place to bike because of the scenery and distinct pedestrian and biking culture. You can bike anywhere you want on the streets and on the roads, on the walking trails, and off trail in extensive dirt path networks in the south on Mt. Stenhouse and in the northern part of the island through jungle.

3. Tung Chung to Tai O along the Lantau Coast

The unique houses in water at Tai O

This route is for people who want a long ride with varied scenery. Most of the route is a paved walking and riding pathway used by locals going to and from houses and little villages along the way, but it is also popular with Hong Kong cyclists who want an out of the way place with interesting scenery and places along the way.

The path is along the north coast of Lantau Island, and it is one of Hong Kong's premier hiking paths. However, this isn't a hike through pristine nature. The concrete paths goes through woods most of the way, but three kilometers of it in Tung Chung is urban. There are about nine Chinese villages or shanty towns.

In Tai O, you might see the pink dolphins on a boat ride. You can enjoy the seafood restaurants. There is a strange lack of English signs for walkers and riders. The bus station is near the boat pier.

Lightning: There are no lights of the dirt track near Tai O. The track there is rocky and rough and might be dangerous to ride at night.

Pollution: The section of the route along the northern coast is a little polluted, and there is trash on the shore.

Noise: The airport noise is present along half the route.

Tung Chung: See the directions for getting to the Tung Chung MTR station below. You can also access Tai O from Mui Wo on Bus 1. Lantau buses will allow one bike loaded on the bus with the front wheel removed. Some buses might allow you to use their bike racks attached to the front of the bus.

Tai O: You can ride Bus 11 from Tung Chung to Tai O. In view of crowds taking buses that leave Tai O in the afternoon and early evening, it might be better to start this route in Tai O if you want to end your ride around that time.

4. Tung Chung to Mui Wo along the Olympic Trail

This path is ideal for families with kids older than 10. It is fairly easy along paved road, but the only difficult parts are places with steps that you might need to push your bike up or down because they are too steep. Most of the places with steps have a narrow bike path next to them. The scenery is great, and the Olympic Trail takes people across Lantau between the MTR station in Tung Chung and the pier at Mui Wo.

The Olympic Trail is a walking path connecting Mui Wo with the north shore of Lantau. Hikers can hike this route in 2.5 or 3 hours with stops to see interesting sites along the way including a small waterfall near Mui Wo, the sea from the hills, and a pond near Tai Ho Wan.

You'll enjoy the easy access by MTR train (you can put your bikes on it) and the Mui Wo ferry. There is also a bike shop where you can rent bikes Mui Wo ranging from 35 HKD for regular bikes and 150 HKD for a mountain bike per day.

Food: While in Tung Chung, you might want to check out the CityGate Outlets above the MTR station. It is known for economically priced food at the food court.

Water: Buy drinks at Mui Wo or Tung Chung because there are no stores along the rest of the route. There are public bathrooms at Tai Ho Wan and at Mui Wo near the Silvermine Waterfall and near the pier where you can get drinkable water for free.

Two routes in Mui Wo: At the Silvermine Waterfall, there is a steep downhill. Be careful about pedestrians on it. Immediately past the waterfall area, there are two routes you can take to the Mui Wo pier. One is the sharp left paved path going down an incline. It goes through shady, mostly empty parkland much of the way and then goes to a big beach.

The other way allows you to see the locals' apartments and little Chinese houses and see a lot of of the Mui Wo village valley scenery.

Mui Wo: Simply take one of the slow ferries that leave from Central Pier 6 about every one and a half hours or so. You can walk your bike on the ferry. If you want to rent a bike, it is best to rent one in Mui Wo.

Tung Chung: There is no slow ferry to the Tung Chung area, but you can put your bike on the MTR (on the first or last car) if you remove the front wheel before you get on. The staff would prefer if you put the wheel or both parts in clean sacks.

(Skill Level: Easy, Exertion: Easy to Moderate Depending on Distance)

While the Hong Kong urban area is congested and discourages cyclists, Sha Tin was built to be family and biking friendly with bike paths for easy travel and recreation. Sha Tin is a city in itself and is like a residential suburb of Hong Kong. Why not take advantage of it?

Choose where to go yourself. You could cycle eastwards along the north bank of the Shing Mun River (it looks like a canal) past the Hong Kong Jockey Club Race Course to the Pak Shek Kok Promenade. The Hong Kong Science Park with its buildings and places to eat might interest you. Tai Po's Waterfront Park has a big flower garden where you can end your ride.

You could also continue to the beautiful scenic area of Tai Mei Tuk along the Tolo Harbour Cycling Track. The whole distance on the bike route to Tai Mei Tuk from the Sha Tin Park near the city hall is about 19 kilometers. What makes the going easy is both the quality of the pavement and the many signs showing the way.

Alternatively, for a short easy ride, just take the promenade/bike path along the Shing Mun River westwards, and in a few minutes you'll be at the Heritage Museum that you could visit and continue to ride in Sha Tin's bike paths. Kids in particular might want to see Sha Tin Park's big playgrounds.

Bike rental: To make things easy, there are big bike rental shops in Sha Tin, Tai Po, and Tai Mei Tuk. Some of these are related, and you can get a bike in Shatin and drop it off at the shop's sister shop in Tai Po or Tai Mei Tuk. Bike rental start at 65 HKD or so for a day. Several Sha Tin bike rental places are right near the Shing Mun Promenade just past city call.

Crowds: These routes are so popular that they can be too crowded on weekends and holidays. So it is best to go on weekdays or just at dawn.

China Highlights can arrange and facilitate bike tours in Hong Kong and other areas of China.

Let us help you design your own tour of Hong Kong. We can help plan and arrange a biking tour. Tell us your ideas.

See our full spectrum of tours.