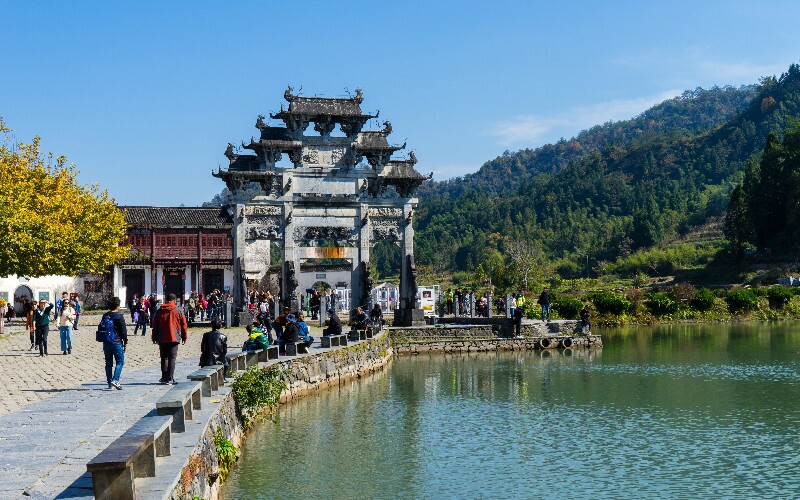 To see about 100 Ming and Qing houses, dine, sightsee, and shop for souvenirs and country products, this small village south of the Yellow Mountains makes for an interesting side trip when visiting the Yellow Mountains scenic area. It is so interesting, it has landed a place in the World Heritage List for its long history, country scenery, and well preserved buildings dating hundreds of years. It has memorial archways and many memorial halls. The ancient halls and houses attract many students here to do sketching. If you are interested in history and culture, Xidi Village is a good place for you.

The old merchant village was cited in 2000 by the World Heritage List for its well preserved old architecture and water systems. Xidi is an outstanding representative of Huizhou traditional culture, building techniques, agriculture, and landscaping. The village has historical, artistic, and scientific value.

Rich merchant families of the Hu clan built large structures that remain standing from the Ming and Qing eras. The clan made an ingenious use of the local water resources to provide running water to all the houses.

The old houses had fire walls that have served to protect these wooden structures since they were built. This fire prevention architecture is part of the reason these very old wooden structures still remain to be appreciated till now.

Xidi Village is located at the south foot of Mt. Huangshan. Its original name was Xichuan. There was a relay station in the west of the village, so the name was changed into Xidi (or "Western Pass"). Xidi was built in the Huangyou period of the Northern Song Dynasty (960–1127), developed in the middle of the Jingtai period (1428–1457) of the Ming Dynasty, and was prosperous at the beginning of the Qing Dynasty (1644). It has a history of nearly 1,000 years.

During the Ming and Qing dynasties, the merchant families in this merchant town reached the period of their greatest prosperity. They carried out an extensive building program and built large houses and ancestral temples. They built roads, bridges, and the town's extensive water system.

Nowadays, more than 100 old houses in Xidi retain the basic appearance and features of the dynastic era. However, many structures and gates were destroyed during the Cultural Revolution in the 1960s and 1970s.

From Tunxi Bus Station in downtown Huangshan City, take a bus for 40 minutes until you get to the crossroads near Xidi. Then take a minibus to Xidi (10 minutes, 2 RMB).

The Yellow Mountains is one of the premier scenic areas in China. It is famed for the beautiful mountains and hiking paths.

Hongcun Ancient Village is only 20 kilometers away by road, and even less on foot. It is the more famous and popular World Heritage listed village in the area. There are well preserved Ming and Qing Dynasty era courtyard gardens and houses. The two ponds in Hong Village and many ancient houses standing by the pond which make it a picturesque village.

We can arrange a 3-hour hike between Xidi and Hongcun for you to explore the hills and rural areas in between: quiet villages, mulberry fields, paddy fields, tea plantations, and bamboo forests.

Xidi is popular, but it is still less touristy and visited tourists than Hongcun. It is an alternative to crowded Hongcun for those who want to see well preserved and ancient architecture, but the country scenery is not as beautiful. For this reason, if you are mainly interested in architecture, the best time to go is during low season during the winter when you can walk the lanes and alleys, shop, and dine with less crowds.

Tour groups with noisy loud speakers parade frequently during high season. When schools and universities let out for summer vacation in July, there is a influx of families and young visitors eager to see the village until August. Avoid Friday, Saturday, and Sunday during high season when weekend tourists crowd in and also the major holidays.

During high season, make reservations in advance. Yellow Mountains flights and hotel rooms are relatively more expensive, and train tickets may be difficult to obtain.

Our 4-day Escape to Huangshan from Shanghai or Hangzhou includes a visit to Hong Village. You could modify it to include Xidi as well. Or contact us to tailor-make a tour including Xidi according to your interests and time constraints.