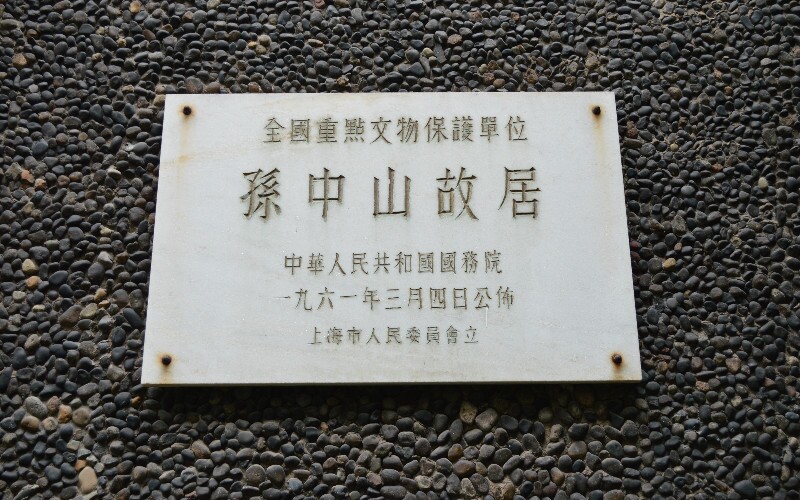 Sun Yat-sen organized and led a revolution against the Qing Empire in the first decade of the 20th century. He was became a temporary first president of the country at the end of the Qing Empire in 1912. Shanghai was China’s most international and modern city, and he and his family lived in this Western-style house in the International Settlement that was a large self-governing British-run district of foreigners. He traveled often, and he probably wasn’t actually there much from 1918 to the time of his death in 1924. Next to his former house, there is a museum building about him.

The house is at the corner of Sinan Road and Xiangshan Road. It is near a park called Fuxing Park. At the time he was alive, a lot of influential Chinese and foreigners lived in the area, and the area still looks like its in a foreign country like England because of all the old Western buildings. In the house, there are signs that are mostly in Chinese. There are also displays of items. You can see things such as an officer’s sword, military maps and pens. There is also a 60-centimeter-tall brass statue of Dr. Sun. It was made in the 1930s by Paul Landowski who was a French sculptor. It is the only replica of the white marble statue placed in the Sun Yat-sen Mausoleum in Nanjing. In the living room and halls, you can see pictures and hundreds of books. He married his wife in Tokyo, and you can see a picture of them.

There is a new museum in a three-story building next to the house. It measures 700 square meters, and it has hundreds of artifacts and mementos that you can see. The main museum is on the first floor, and the second and third floors of that building have offices.

Sun Yat-sen had an amazing life that is worth studying if you want to understand the history of modern China. He grew up learning about resistance against the Qing from a former Taiping soldier. Then he attended school in Hawaii. He became a Western-trained medical doctor, and he started to travel around the world to raise funds for a revolution. He led the revolution to try to form a republic. He was the first president of the country, but he stepped down. However, he was considered the foremost leader by most people until his death.

His wife lived in the house afterwards, but Japan attacked, and she moved to Chongqing in western China. When she returned after World War II, the house was damaged. The site became a memorial, and it became an officially protected site in 1961. Now it is a museum open to the public.

Address: Former Residence of Dr Sun Yat-sen / The Museum of Dr Sun Yat-sen, 7 Xiangshan Road, Shanghai. 中山故居, 上海市卢湾区香山路7号. You can show the address to a taxi driver. The museum is close to Xintiandi that is a new ritzy and well designed shopping and dining area that is a favorite with foreigners.