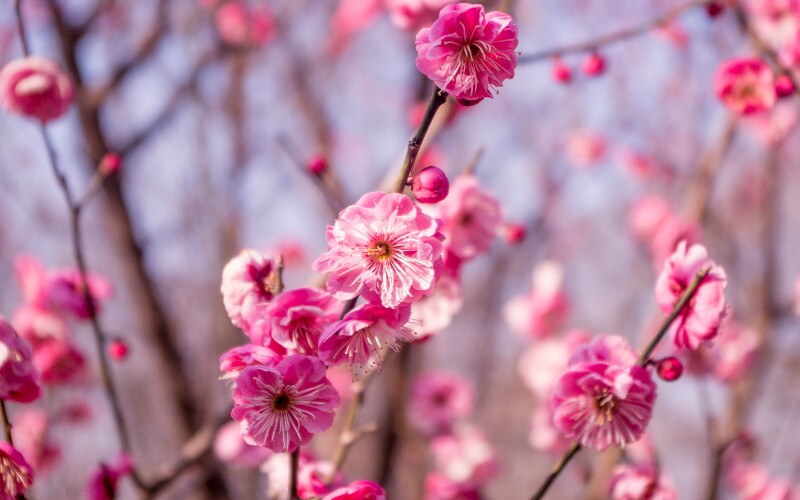 When and Where to See Flowers in China

China doesn't yet have a national flower, but Chinese have favored flowers. Here is a list of the top seven flowers and where you can go see them at the right month.

Among the main contenders for the national flower are the peony, plum flower (found on 50 cent coins, winter), chrysanthemum (autumn), and orchid (spring).

Other highly favored flowers among many Chinese are: azaleas, peach flower (found on 1 cent coins), lilacs, and tulips.

The large national garden has an annual indoor orchid festival every January. In large greenhouses, you can see thousands of orchids of about 300 different kinds, and many other flowers and plants of thousands of varieties can be seen too.

Beijing is very cold in January, but you can enjoy the 136 acre garden.

About 35,000 plum trees can be seen on Purple Mountain in eastern Nanjing where there is a big 101 hectare or 250-acre plum tree garden and dozens of kinds of plum trees.

While there, you can also visit the nearby Ming Tombs, Sun Yat-Sen Mausoleum, and the Red Chamber Artistic and Cultural Garden. See the beauty of the plum trees of Nanjing and learn something about the history and literature of China on the same tour.

The southern city of Guilin is known for its Li River cruises and rock formations. About 70 miles to the north in the ethnic Yao region, the large peach orchards bloom, and along with the peach trees you can watch the ethnic minority customs and enjoy the ethnic foods.

It never freezes in Guilin, and you can enjoy the cool spring weather on a cruise and in the mountains.

April for Tulips and Azaleas

Tulips are a favorite spring flower around the world. In Beijing, literally millions of them are on display in April at the Tulip Cultural Festival in Shunyi. Along with them, there are hundreds of thousands of lilies, and cultural exhibitions.

Another favorite spring flower is the azalea. Dozens of varieties grow naturally and are cultivated over a large area in ethnic areas. They use it for herbal medicine.

Peonies are a favorite flower often seen in Chinese gardens. Luoyang is one of the 7 ancient imperial capitals, and it was known as the "Home of Peonies." The Peony Festival begins about the middle of April and ends in early May.

The Qing Dynasty named the peony its national flower in 1903.

Every June, there is an annual lilac and tulip festival in Xining in the the high mountainous province of Qinghai.

Chrysanthemums flower in the fall, and they are a favorite of Chinese. It is brewed for a popular herbal tea.

They are popularly used for decoration and drunk especially during the Double 9 Festival.