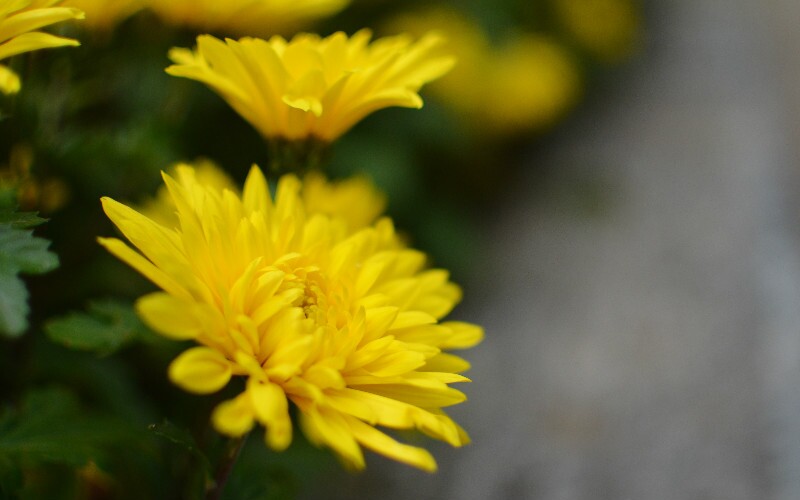 Enjoying chrysanthemum is a kind of custom in the Double Ninth Festival.

According to records from the mysterious book Yi Jing, the number 6 belonged to the Yin character while the number 9 was thought to be of the Yang character. So, on the ninth day of the ninth lunar month, both day and month are Yang characters. Therefore, the festival was named the Double Ninth Festival.

In ancient times, people believed that the double ninth day was worth a celebration. Since folk people had the tradition of climbing a mountain on that day, the Chongyang Festival is also called the Height Ascending Festival. The Chongyang Festival also has other names, such as the Chrysanthemum Festival. As "double ninth" is pronounced the same as the word meaning "forever," ancestors are also worshipped on that day.

On the Double Ninth Festival, people hold many activities in celebration, such as enjoying the chrysanthemum, inserting Zhuyu, eating Chongyang cakes, and drinking chrysanthemum wine, among others.

In ancient China, as people ascended to high places on the Double Ninth Festival, the Chongyang Festival is also known as the Height Ascending Festival. This custom was supposedly started during the East Han Dynasty when people usually climbed mountains or towers.

According to historical records, Chongyang cake was also called the Flower Cake, the Chrysanthemum Cake, and the Five-Color Cake. The Chongyang cake is a nine-layer cake shaped like a tower. On its top should be two sheep made from flour. Some people place a small red flag on the top of cake and light candles.

During the Tang Dynasty, inserting Zhuyu on the Chongyang Festival became popular. Ancient people believed that inserting Zhuyu helped avoid disasters. And women stuck chrysanthemum in their hair or hung branches on windows and doors to ward off evil.

The Double Ninth Festival can be traced back to the Warring States Period. During the Tang Dynasty, the Double Ninth Festival was on official lists of folk festivals. During the Chongyang Festival, people went outside and climbed mountains together, and engaged in many other activities, such as enjoying the chrysanthemum, inserting Zhuyu, eating Chongyang cakes, and drinking chrysanthemum wines, among others.

Like other traditional festivals, Chongyang Festival also has ancient legends.

During the East Han Dynasty, there was a devil of the plague in the Ruhe River. As long as it showed up, people got sick and even died. People living around the Ruhe River suffered a lot from the disease ravaged by demons.

Check out China Highlights' Chinese festival tours and join one of them. Or contact us and let us help you arrange your own Chinese tours.