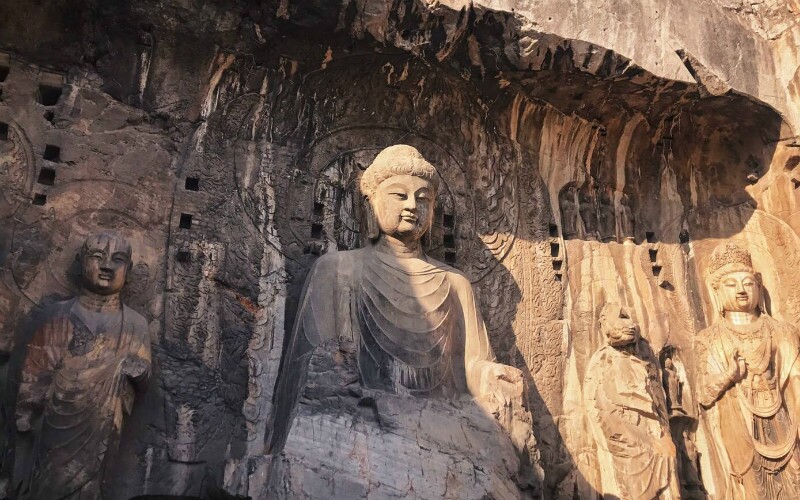 Luoyang is an ancient city with a long history and splendid culture. Luoyang lies in the west of Henan Province, which is located in central North China. It is seated on the north bank of the Luo River, a southern tributary of the middle reaches of the Yellow River, so it is called Luoyang because “yang” in Chinese means the north or sunny bank of the river. Luoyang is situated between Beijing and Xi’an. It is about 1 hour 40 minutes from Beijing by air and 1 hour 40 minutes from Xi’an by bullet train.

The Capital of 13 Ancient Dynasties

Luoyang was the capital city for the longest period, the most dynasties, and the earliest time compared with the other ancient capital cities. Luoyang lies in the Central Plain surrounded by mountains, which were natural barriers against invasions. Apart from its favorable geographical location, Luoyang had an agricultural advantage as several rivers flow through it. Therefore, 105 emperors of 13 dynasties set their capitals in Luoyang during China’s history.

Luoyang was a center of politics, economy, and culture in China for a total of over 1,500 years. In the Xia Dynasty (2070–1600 BC), Luoyang began its history as a capital city. In the Western Han Dynasty, Luoyang was not chosen as the capital but the ruler still attached great importance to the city.

In the Eastern Han Dynasty (25–220 AD), Emperor Guangwu unified the country and set the capital in Luoyang. At that time, Luoyang became the largest industrial and commercial city. The Roman Empire (27–476 AD) was the period of China's Eastern Han Dynasty. At that time, Luoyang and Rome were the two capitals of the most powerful countries in the world.

In the Sui Dynasty (581–618 AD), Luoyang became the capital again. Emperor Yang ordered the construction of the Grand Canal. The Grand Canal was centered at Luoyang, south of Zhujun (now Beijing) and north of Yuhang (now Hangzhou). It became the main artery for traffic between the north and south at that time, and consequently Luoyang developed more prosperously.

The Tang Dynasty (618–907 AD) was one of the strongest periods in Chinese history. In the early period, Luoyang was the economic and cultural center. In the middle and later periods, Luoyang became the political center. During the Tang Dynasty, Luoyang had always been the capital or auxiliary capital. It played an important role during that period.

Luoyang’s responsibility as the capital wasn’t removed until the Jin Dynasty (1115–1234). In this period, Luoyang acted as the capital intermittently. Nowadays, Luoyang is not a metropolis like Shanghai, but history has left its mark on Luoyang. There are a few very important historical sites including the Longmen Grottoes, which is a UNESCO World Heritage Site, and White Horse Temple, which was the first Buddhist temple in China. They offer an opportunity to learn about Luoyang’s past. When you venture into Luoyang, you become part of a strong historical atmosphere.

The Cradle of Chinese Civilization

Luoyang was the birthplace of Shaolin Kung Fu. In 497 AD, the emperor of the Northern Wei Dynasty ordered construction to commence of Shaolin Temple on Mount Song, which belonged to Luoyang in the past. Shaolin Kung Fu started developing. Although Shaolin Temple no longer belongs to Luoyang, one fact that cannot be denied is that the temple originated in Luoyang and Luoyang witnessed its glory throughout history.

Taoism originated in Luoyang. Laozi was the founder of Taoism, and Taoism was founded in the Eastern Han Dynasty based on his theory. Laozi had lived in Luoyang since he was a child. He researched his theory and left his writings, Tao Te Ching, in Luoyang.

Three of the four great Chinese inventions were created in Luoyang. Gunpowder, printing, and papermaking were all invented there. These inventions have had a significant influence on Chinese culture.

The site of the Longmen Grottoes was named a UNESCO World Heritage Site in 2000. About 2,300 grottoes and niches, more than 40 crematory urns, 25,000 inscribed stone tablets, and over 100,000 Buddhist images and statues are carved into the cliffs. Luoyang’s Longmen Grottoes are a treasure trove of art because of the Chinese stone inscriptions there. The site represents the highest achievement in art relating to sculptures, which is a real treasure in China in terms of religion, fine arts, architecture, and calligraphy. This alone makes it worth the trip.

The site of the ancient capital city of the Han and Wei dynasties is a UNESCO World Heritage Site. It is the eastern end of the Silk Road heritage site. It was the capital of seven dynasties from the 1st to the 6th century in China and was the largest capital city in ancient China. Now, it is 15 kilometers (9.3 miles) east of today's Luoyang city. This was the eastern starting point of the Silk Road.

Luoyang is suitable for traveling to all year round.

Weather and the Best Times to Visit Luoyang

Luoyang is in a temperate zone and has a continental climate. It is renowned for its historical and cultural sites. Luoyang is suitable for traveling to all year round. If you are interested in flowers, the best time to visit is in April due to the weather and Luoyang's famous Peony Festival.

How to Get to and Travel Around Luoyang

Luoyang has convenient transportation. The city is accessible by trains and flights from the main cities, such as Beijing, Shanghai, and Xi’an. High-speed rail makes it more convenient to get to and to travel around the city. It takes 1½ hours to get from Xi’an to Luoyang and 40 minutes by bullet train from Zhengzhou. Read more on Luoyang transportation.

Luoyang's food is related to its geographical location. The city is located in a basin, surrounded by mountains. It is dry and frigid. Therefore, people like drinking soup to keep their stomachs warm. Soup is the biggest characteristic of Luoyang’s dining traditions.

A Water Banquet is the most representative food in Luoyang. It contains 24 dishes. Most of the dishes are cooked in soup. It is a traditional food that you can only taste in Luoyang.

If you want to try some local flavors, your guide will lead to some restaurants that are normally only found by locals. There are also some Western, vegetarian, and Muslim restaurants in Luoyang. Tell your guide your preferences and requirements, and she/he will give you recommendations.

Although there are not as many hotels in Luoyang as there are in some big cities, such as Beijing and Shanghai, there are many options ranging from 5-star hotels to inns. If you want to stay in a place with convenient transportation and that is near to some attractions, you can choose a hotel in Xigong District or Luoyang Old Town.

Luoyang is not a popular tourist city. Some hotels don’t serve foreign tourists — please check this when you book your hotel. Taking into account the service provided in English, comfort levels, facilities, and living conditions, we advise choosing hotels with high star ratings for a better experience.

Tell us your preferences relating to accommodation, facilities, location, or beautiful views. Our specialists will give you recommendations accordingly.

Explore Luoyang with Us

Luoyang is not the most popular tourist city but it has a lot of charm and plenty of attractions for you to explore. Here are our Luoyang itineraries, for reference: