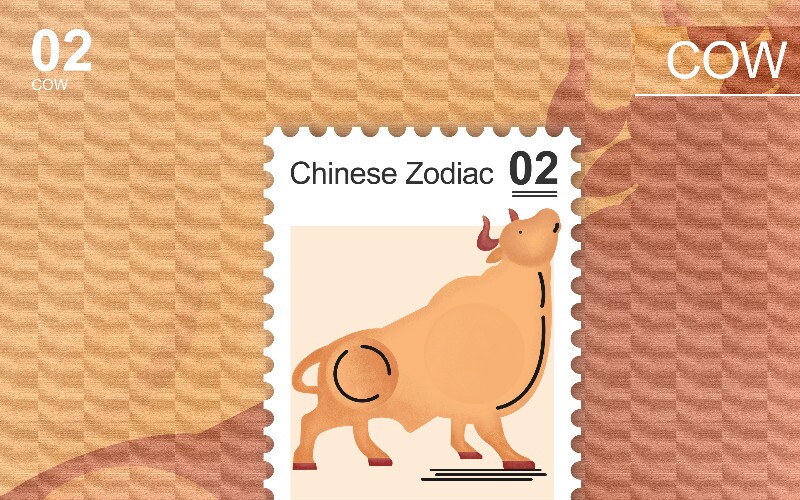 The Chinese legends, myths, and folk customs of the Ox have passed from one generation to another since ancient times, and are still popular among the Chinese people nowadays.

The Ox and the Ancient Ancestor Totem

A number of countries and nations use the Ox as a totem-worshiping object in the world. The ancient Egyptians and the Persians believed that oxen were their ancestors, and the ancient Chinese nation worshiped the Yan Emperor and the Yellow Emperor as their ancestors.

According to archaeological excavations, the Yan Emperor (a legendary figure in ancient China) was born on the Tiantai Mountain, Baoji County, Shaanxi Province, and lived in the early period of the Yaoshao Culture in a primitive society. The Book of History, written by Sima Qian (145–90 BC) of the Han Dynasty (206 BC – 220 AD), records that "the Yan Emperor arises from Lieshan Mountain and lives by Jiangshui River, and is the leader of the ancient Jiang Tribe".

According to the records from Shan Hai Classic (a book on ancient Chinese geography), the Yan Emperor had the head of an ox but a human body, his tribe used an ox as their totem, and the ancient people offered sacrifices to him during the Spring Festival. As a result, the ancient Spring Festival was closely related to the worshipping of oxen as ancestors.

A number of ancient ethnic minority groups use the Ox as their totem in China. According to Tibetan historical documents, the Tibetan ethnic people used yaks as their totems because some of them came from ancient Qiang where people made a living by raising yaks.

The ancient Mongolian ethnic people also worshiped the Ox as their totem. According to the records from The Mongolian Buryat History, the Mongolian ancestor, Yi Du Gan, mated with an ox and produced offspring during her stroll along Baikal Lake.

As an ancestral totem object, the Ox has had a substantial influence on traditional Chinese culture and folk customs. The primitive rock paintings themed with yaks are still well preserved in Tibet, and the ox–head patterns can still be seen on the bronze wares unearthed from the Shang Dynasty (16th century–11th century BC), both of which date back to the worship of oxen or yaks by the ancient Chinese people.

The Yan Emperor led his tribe to settle down on the middle and the lower reaches of the Yellow River instead of walking along the rivers of northwest China for hunting and fishing. He tasted herbs, explained the differences between the five grains (referring to soybeans, wheat, broomcorn, foxtail millet, and hemp) and enthusiastically built up fields to boost the agriculture, making a great contribution to the development of the ancient Chinese nation.

The Tibetan genesis myth, The Origin of Things, creates a romantic story of the creation of heaven and Earth, and it records that "the head, eyes, guts, hair, hoofs, and heart of the ox turn into the sun, the stars, the rivers, the lakes, the forests, and mountains respectively after its death".

The bones of oxen were buried with the dead in the prehistory period, which was the start of sacrificial offerings of oxen to God or the ancestors of humans.

After the Shang and the Zhou (1100–221 BC) dynasties, offering sacrifices to God was equally important as launching a battle for the ancient Chinese people, who offered oxen as sacrificial objects to their ancestors (normally the Yan Emperor and the Yellow Emperor). A number of ox bones were discovered during the archaeological excavations in Anyang, Henan Province, the ancient capital of the Shang Dynasty.

According to the Changhua Annals of the Republic of China (1911–1949), the Li ethnic people did not see a doctor if they were sick; instead, they preferred to slaughter an ox and pray for healing. They also took advice from witches and ate beef as medicine.

In all, it was a grand ceremony for the ancient people to offer sacrifices to both their ancestors and gods, which catered to their wishes to pray for peace and avoid evil spirits.

The Legends of Ox–Head Ghost A Bang

As the concept of gods and ghosts developed among the ancient Chinese people, the image of the ox–head ghost, A Bang, was created on the basis of worshiping the God of Ox.

According to the legends, A Bang was initially a little soldier in the underworld, who was transformed into an ox–head ghost with a horse face. This Taoist figure symbolized all the evil and dark things in the world.

China is an agricultural country, and the Chinese people attach great importance to welcoming spring on Spring Equinox Day. It even became a national festival for the people to welcome spring by whipping the oxen during the Emperor Qianlong's (1711–1799) reign during the Qing Dynasty (1636–1912).

According to the historical records of the Ji'nan Prefecture Annals, officials whipped the oxen three times with colored sticks on Spring Equinox Day, encouraging the people to farm and plant. The three whips had different meanings: the first whip meant seasonable weather for crop raising, the second one symbolized the country flourishing and people living in peace, and the third one symbolized the mercy of the emperors reaching into the farthest corners of the earth.

People Born in the Year of the Ox

The Spirit of the Ox/Cow

The cow eats straw but produces milk and the ox tills the land but is often beaten, also providing beef and blood for human beings. The oxen never bully the weak and fear the strong, and they are also easily led by the noses by the farmers while working, which is the sacrificing spirit of the ox.

This is reflected in a couplet from a poem by Lu Hsun (1881–1936), reading as: "Fierce–browed, I coolly defy a thousand pointing fingers; Head bowed, like a willing ox I serve the children," which fully expresses his absolute loyalty to the people.