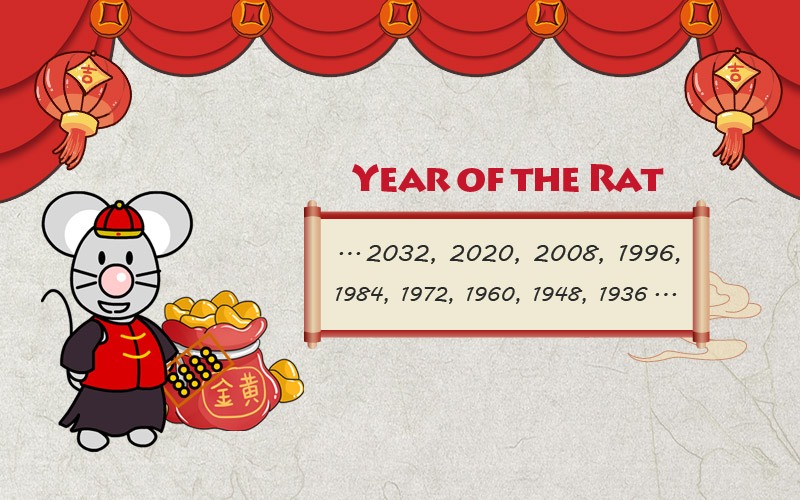 Year of the Rat

According to the Chinese zodiac story, in the competition held by the Jade Emperor to decide the zodiac animals, the quick-witted rat asked the diligent ox to take him on a ride to cross the river and jumped down before the ox crossed the finish line. Thus the rat won the race and became the first of the zodiac animals, followed by ox, tiger, rabbit, dragon, snake, horse, goat, monkey, rooster, dog and pig.

How did the Rat become the first sign in Chinese zodiac? The video below will tell you the story.

Was I Born in a Year of the Rat?

You can use our free Chinese zodiac sign calculator to be sure or see the table below.

In Chinese element theory, each zodiac sign is associated with one of the five elements: Wood, Fire, Earth, Gold (Metal), and Water. Each Rat-element year corresponds with an element and comes once in a 60-year cycle. For example, 2020 was a year of the Metal Rat. The next Metal Rat year is 2080.

Year of the Rat Dates

The Rat’s Personality and Characteristics

Rats are quick-witted, resourceful, and smart but lack courage. With rich imaginations and sharp observations, they can take advantage of various opportunities well.

In Chinese culture, rats represent working diligently and thriftiness, so people born in a Rat year are thought to be wealthy and prosperous.

Men born in a Rat year are very curious so they tend to try their hands at anything and they can deal with tasks skillfully.

Due to a lack of courage, as well as good command skills, they are not capable of being leaders. Opportunistic and picky as male Rats are, they do not have broad minds but take a narrow view of things.

Women born in a Rat year are pretty, smart, and lovely. They have quick minds and dexterous hands, and are able to learn anything. They are always considerate of their families and friends.

It is theorized that a person's characteristics are decided by their birth year's zodiac animal sign and element. So there are five types of Rat, each with different characteristics:

Chinese astrology states that certain zodiac animal combinations get along better than others, and that some animal signs are natural enemies.

Most compatible zodiac signs with a Rat: Rat, Ox, Dragon, or Monkey

Lucky Things for People Born in a Year of the Rat

What Are Rats' Horoscope Predictions in 2022?

You were affected by various adverse changes due to a (partial) coincidence with Tai Sui last year. Entering year of the Tiger 2022, your fortune will be more stable than last year. Although there will not be much development, the year will pass smoothly in general.

Read more on Horoscope for Rats in 2022.

With good insight and a sharp perspective, Rats have good judgment in what they do, which enables them to prevent unnecessary problems. Rats are cautious and meticulous, so they tend to show a serious attitude toward their work.

The best careers for Rats are:

General speaking, Rats are healthy. They are full of energy and active, which helps them keep fit and avoid illness.

A balanced diet and regular exercise benefit Rats. With enough rest Rats can keep high spirits at work, which can improve work efficiency. When in stressful and tense conditions, Rats are suggested to take a tour to free stress and tension.

According to Chinese astrology, the year of their birth sign (本命年běnmìngnián /bnn-ming-nyen/ 'origin (of) life year') will bring people nothing but bad luck. It is believed that people will offend Tai Sui, the God of Age, in their benmingnian.

Therefore, Rats should pay special attention to avoid misfortune in their lives in the year of their birth sign. The next Rat year is 2032. It starts from the Chinese New Year (February 11). Read more about How to Be Lucky in Your Ben Ming Nian.

How to Build Relationships with Rats

With an active nature, Rats enjoy a flexible social circle. They are interested in attending different kinds of social occasions. They like to make new friends, but they seldom further their relationships with others. Rats have a charming appearance, which can attract more friends.

In love relationships, Rats find it easy to start a new relationship with someone, but they also break off relationships easily, which results in trouble with infidelity.