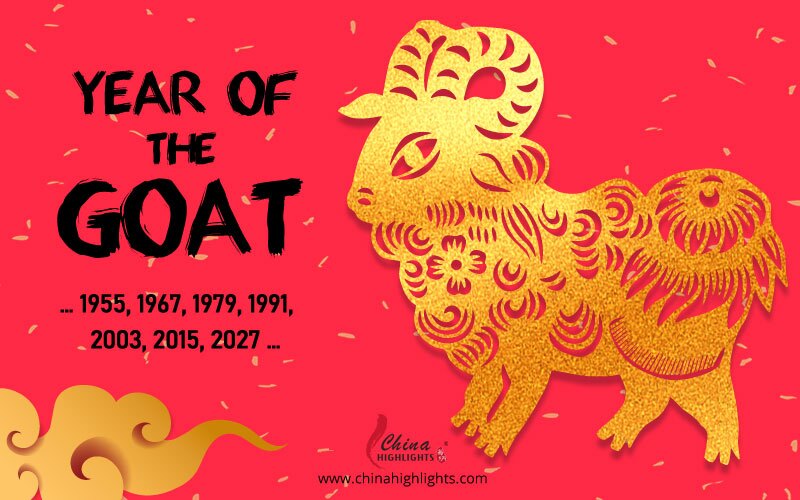 Year of the Goat

The Goat is eighth in the Chinese zodiac cycle. According to Chinese astrology, each year is associated with an animal sign, occurring in a 12-year cycle.

Moreover, Goat years are generally dated by the Chinese lunar calendar (starting on Chinese New Year). You can use our "Find Your Chinese Zodiac Sign" tool to find your zodiac animal sign or see the table below.

You can use our free Chinese zodiac sign calculator tool to find your zodiac animal sign or see the table below.

People born in a year of the Goat are generally believed to be gentle, mild-mannered, shy, stable, sympathetic, amicable, and brimming with a strong sense of kindheartedness and justice.

They have very delicate thoughts, strong creativity, and perseverance, and acquire professional skills well. Although they look gentle on the surface, they are tough on the inside, always insisting on their own opinions in their minds. They have strong inner resilience and excellent defensive instincts.

Although they prefer to be in groups, they do not want to be the center of attention. They are reserved and quiet, most likely because they like spending a lot of time in their own thoughts. Goats like to spend money on fashionable things that give them a first-class appearance. Although Goats enjoy spending money on the finer things in life, they are not snobbish.

Lucky Things for People Born in a Year of the Goat

Things that will bring Goats luck:

Things that Goats should avoid:

In Chinese element theory, each zodiac sign is associated with one of five elements: Gold (Metal), Wood, Water, Fire, or Earth. This means that, for example, a Wood Goat comes once in a 60-year cycle.

It is theorized that a person's characteristics are decided by their birth year's zodiac animal sign and element. So there are five types of Goat, each with different characteristics.

However, those who don't match need to put more effort into their relationships.

See below the compatibility of the Goat with other animals, and find out if the Goat is compatible with your sign or not.

2023 is a year of the Rabbit. Goats, your horoscope is relatively turbulent, but you need to look at it with optimism with a view to taking advantage of the up times.

In 2023, you will be influenced by Tianyi nobles (four favorable gods in Taoist tradition) and Kuigang nobles (another four ‘pillar gods’) in your careers, so that you will have a good career prospects.

As your business ability is outstanding this year, you will be appreciated by your boss or leadership, and get the opportunity for a promotion and salary increase.

Your relational luck is rather average. Although the potential of a budding romance is relatively strong, due to the influence of disasters, the original romance will turn rotten, so you need to avoid getting your hopes up too high.

Is it a Good Year to Give Birth to a Baby?

Although this is an outdated superstition, which seems silly, it has a real effect on Chinese society.

Is It the Year of the Sheep, Goat, or Ram?

Chinese people are actually also not quite sure about this. In Chinese the word 羊 (yáng) is a generic term, and can refer to a sheep (绵羊), goat (山羊), ram/buck (公羊 male sheep or goat), antelope (羚羊), etc. There is a lack of clear definition on the zodiac Goat in Chinese history.

However, most Chinese people and experts on folklore believe that the Chinese zodiac animal is the Goat, not the Sheep, and they have some evidence to support their idea.

Firstly, the Chinese zodiac is an invention of the Han nationality, and goats were widely raised by the Han people (unlike sheep), so the zodiac animal is more likely to refer to a goat.

Thirdly, the Goat was one of the 12 bronze statues of the Chinese zodiac at the Old Summer Palace. Although its head was lost, its present reproduction according to historical records is in the image of a goat.

People born in a year of the Goat prefer to work in a team. Their best work partners are Horses. They are not bothered about status and power. Unless asked, they won't ever volunteer for anything and they act as leaders. Good career choices for Goats are: pediatrician, actor, daycare teacher, interior designer, florist, hairstylist, musician, editor, illustrator, and art history teacher.

Read more on What Zodiac Sign Is Your Best Work Partner.

How to Build Relationships with Goats

Generally speaking, Goats are private. Therefore, it may take time and effort to get to know those who are born in a year of the Goat. Goats seldom share their personal lives. This is the reason why most Goats have few intimate friends. Once they become friends, their friendship is peaceful and fulfilling. They work hard for those they love.

People born in a year of the Goat are very serene and calm. Therefore they tend to have fewer health problems.

If Goats are mentally and emotionally in good spirits, this should have a positive effect on their physical health. Eating fresh and organic produce, and eliminating red meat from their diet when possible, is an effective way to keep healthy.

They should get out among nature and commune with the great outdoors. Fresh air, trees, and sunshine will all do wonders for their health. Goats should have a regular schedule for meals and keep their sleep and waking times consistent.