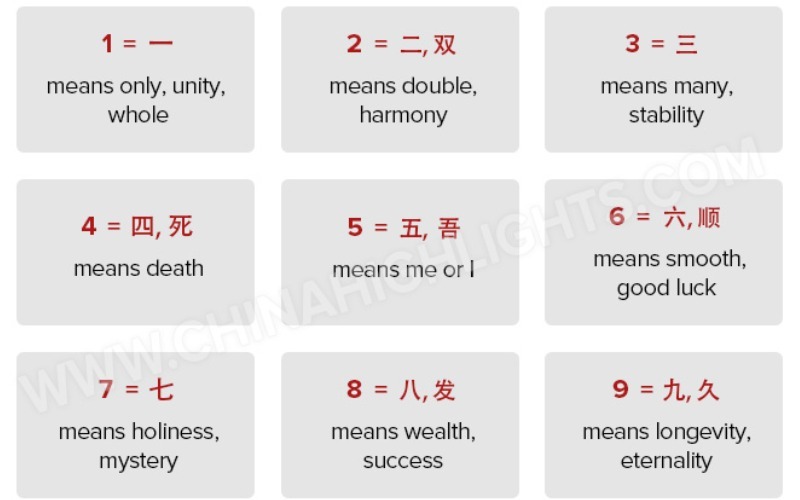 In China, lucky numbers have pronunciations that are similar to words with lucky meanings. Number 8 holds huge significance as a lucky number. To a lesser extent 2, 6, and 9 are considered lucky. 4 is the most unlucky number in China. As well as these general number superstitions, fengshui and the Chinese zodiac dictate different number luck for different places/people.

The Lucky Numbers in China

In Chinese culture, people believe that lucky numbers can bring them good luck and fortune. So, it is important for Chinese people to choose a good number for important items, such as wedding dates, dates of moving into a new house, numbers of car license plates, telephone numbers, and so on.

Number 8 — the Luckiest Number in China

The number 8 is believed to be the luckiest number in China because '8' is associated with wealth. 'Eight' (八) in Chinese is pronounced ba and sounds similar to fa (发, traditional character: 發) as in facai (发财), meaning 'well-off' or 'becoming rich in a short time'.

There are many phrases or expressions associated with '8', such as "Bamian laicai" (八面来財 — '8 sides coming wealth'), which means 'wealth coming in from all corners of the world' and "Bamian chunfeng" (八面春风 — '8 sides spring wind'), meaning 'spring wind from eight directions', expressing the wish that someone gets luck wherever s/he goes, or whatever s/he is working on.

Chinese people would like to choose '8' as the time and/or date of important events. For example, the opening ceremony of the 2008 Beijing Olympic Games commenced exactly at 8 minutes and 8 seconds past 8 pm on the 8th of August 2008.

Chinese' fondness for 8 can be seen in many other cases, such as house numbers, phone numbers, number plates, wedding dates, the date for opening a business, and so on. 8 is considered lucky and favored by Chinese because it holds meaning in both traditional and modern cultures.

6 (六), pronounced liu, is considered lucky as it sounds like the word that means 'to flow', and can indicate smooth progress in life. It also means well-off. Similar to 8, 6 is preferred in number plates and phone numbers. When a couple gets engaged, the man customarily offers a gift to the girl's family which is usually money (RMB 6,666 and such) and this gift signifies a harmonious life for the couple.

If a person is to celebrate their 66th birthday, that is a grand occasion. In business, 6 is considered lucky. New ventures or contracts are signed on dates that have 6 in them.

9 (久), pronounced jiu, is a popular number, much like 6 and 8. It is similar to the word that means everlasting. It is common to gift your beloved 99 roses on Valentine's Day in China. 9 is the highest single digit number and hence represents completeness.

This made it very popular with Emperors who used it in many aspects of their administration, right from dividing the empire into 9 continents, wearing nine-dragon imperial robes, nine-rank system for officials, etc. In Chinese mythology, it is said that the Dragon has 9 children.

Chinese strongly believe in harmony and balance, hence even numbers naturally gain preference over odd numbers. The number 0 is a whole number as well as an even one, especially for money, and is thus considered a lucky digit.

2 (两), pronounced er or liang, is considered to be lucky as the Chinese believe that all good things come in pairs. This is observed in repeated characters in some brand names or gifts.

3 (三), pronounced san, is considered lucky due to its similarity in sound to the word that means birth. Additionally, this number represents the three stages in the life of humans - birth, marriage, death - that adds to its importance in Chinese culture.

An instance is the Tiananmen Gate which is the main entry to the Forbidden City. This gate contains 5 arches. In Chinese history, the number 5 is used in many classifications, such as five flavors (pungent, sweet, sour, salty, bitter), five sacred mountains (Huashan, Hengshan in Hunan, Hengshan in Shanxi, Songshan and Taishan) and so on.

7 (七), pronounced qi/ chi, is a number that symbolizes togetherness and harmony as its is considered to be the union of yin, yang and the five elements (described above) in Confucianism.

In the Western world, the number 13 is considered unlucky. But in Chinese culture, 13 is a lucky number, which means 'assured growth' or 'definitely vibrant'.

Unlucky number 4 is avoided in this Shanghai elevator.

The above captures all you should know about lucky numbers. However, we should be mindful of some unlucky numbers as well when in China.

While only a few numbers are considered unlucky in China, the number 4 is the most unlucky as it rhymes with the word that means death.

Interestingly, you will notice this in building elevators which usually omit this number. Here's an image of the elevator for even-numbered floors where number 4 is not mentioned at all.

To add, gifting money or any object that has the digit 4 (40 or 14 RMB) associated with it is considered inauspicious. This factor cascades down to the way products are priced in China as opposed to other countries and the cash amounts presented in red envelopes and other forms of gifting.

The number 3 can be unlucky as well depending on the situation and use. For example, gifting to friends or to couples seldom contains the number 3 in any form of association. Three is pronounced 'san' which is similar to the word that means 'to part ways'.

Chinese Number Combinations and Their Meanings

Many combinations of numbers have been used to express different meanings nowadays, especially by the young people in China. Here are the top combinations and their meanings.

168 in Chinese (一六八 yi liu ba) has a similar pronunciation to 一路发 (yi lu fa), which means being lucky and prosperous all the way to (financial) success.

520 is often used by young lovers in China who want to express their love for each other in a simple way. In Chinese, the pronunciation of 520 (五二零 wu er ling) bears some resemblance to wu ai ni (吾爱你), which means 'I love you'.

The number 250 is another set of digits that is used as an insult to call someone foolish or mock their intelligence in informal language. 二百五 (èr bǎi wǔ) is the literal way to say 250 in Chinese but people instead say 'lǐang bǎi wǔ'. 250 is half a jin so is equated with 'half brain'.

The pronunciations of 1314 (一三一四 yi san yi si) and 3344 (三三四四 san san si si) are similar to yi sheng yi shi (一生一世) and sheng sheng shi shi (生生世世), which mean respectively 'for someone's whole life' or 'forever'. Lovers use these number combinations to express their unchanging love to each other.

These three numbers are seen as particularly lucky numbers when they are used as the sum of money put into a red envelope (hongbao 红包) for Chinese New Year or a wedding ceremony. The three numbers all express best wishes for a 'smooth future life'.

The Chinese Zodiac and Lucky/Unlucky Numbers

While we have covered all the Chinese Zodiac signs in more detail, in this piece, we want to leave you with the numeric significance for each sign - read on and see which are your lucky colors and which aren't.

For lucky numbers, even if the numbers are a combination of the lucky digits stated below, it is deemed to be lucky for the respective zodiac.

China Highlights can help you with the perfect China trip!

We at China Highlights are eager to answer your questions on this topic or any other and can help you plan a trip in China that includes a traditional tour into the history of the country. Contact us to know more!! Alternatively, you can check out a great feature on our site that lets you create your own trip.