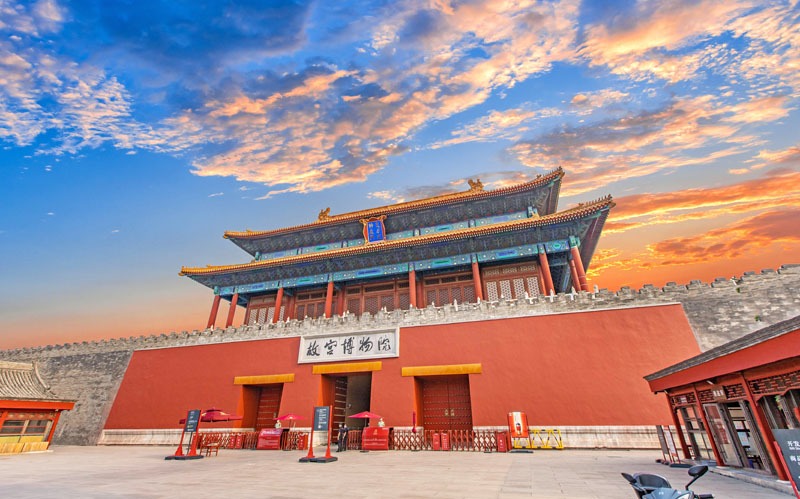 The Forbidden City (Chinese name: 故宫 Gugong 'Former Palace') was the palatial heart of China. It is an imperial palace complex of the Ming and Qing dynasties (1368–1912) in Beijing, China.

As one of the five most important palaces in the world, the grand halls and walls proudly display the essence and culmination of traditional Chinese architecture, fitting for the capital city of the world's largest nation.

What are some interesting facts about the Forbidden City?

Why Is It Called the Forbidden City?

In ancient times, the emperor was said to be a son of Heaven, and therefore Heaven's supreme power was bestowed upon him. The emperors' residence was built leading north, as an earthly foil to the heavenly Purple Palace, i.e. the North Star, though to be home to the Celestial Emperor.

Considered a divine place, it was certainly forbidden to ordinary people and that is why the Forbidden City is so named.

Emperor Yongle was the third emperor of the Ming Dynasty. He seized the throne from his nephew. In order to consolidate his imperial power and protect his own security, he decided to move the capital from Nanjing to Beijing, which was his fief. Thus, Emperor Yongle ordered Kuai Xiang to design the Forbidden City in Beijing.

The Forbidden City experienced three fires, and so most of present palaces were rebuilt during the Qing Dynasty.

During the Second Opium War (1856–1860), the Forbidden City was controlled by Anglo-French forces and occupied until the end of the war.

The Layout of the Forbidden City

The Forbidden City falls into three parts: the defenses (moat and wall), the Outer Court and the Inner Court.

The Meridian Gate (Wumen in Chinese) is the main gate of the Forbidden City. It had three openings. Only the emperor could go through the middle one. It was the place where the emperor issued imperial edicts and battle orders.

The Meridian Gate is the entrance for Forbidden City visits. Visitors need to pass through Tian’anmen (‘Gate of Heavenly Peace’) to reach the Meridian Gate.

The outer court has three main buildings, where emperors attended grand ceremonies. In the Ming Dynasty era, emperors would hold court in Hall of Supreme Harmony to conduct state affairs.

The first hall waiting for you is the Hall of Supreme Harmony (Taihedian), the most important and largest structure in the Forbidden City. The emperors' Dragon Throne (Longyi) is in this hall. In Qing Dynasty, it was mainly used for ceremonial purposes, such as coronations, investitures, and imperial weddings.

The last hall is the Hall of Preserving Harmony (Baohedian), used for banquets and later for imperial examinations.

There are a couple of side gardens with interesting halls to explore. Please consult with your local guide if you want to visit them and have more time to explore the palace.

3. The Inner Court — Residence of the Emperor and His Family

In the Qing Dynasty, the emperors lived and worked mostly in the Inner Court.

Out from the Hall of the Preserving Harmony, you will notice a huge block of marble carved with cloud and dragon designs. Go straight, and you will see another gate, called the Gate of Heavenly Purity (Qianqingmen). This is the main gateway to the inner living court.

The inner court has three main structures at the northern rear of the Forbidden City:

The Forbidden City is outstanding not only because of its magnitude, but also for its unique architectural design. Here are five key features.

The important gates and halls of the Forbidden City were arranged symmetrically.

To represent the supreme power of the emperor, given from Heaven, and the place where he lived being the center of the world, all the important gates and halls of the Forbidden City were arranged symmetrically on the north-south central axis of old Beijing.

Heaven was thought to be Polaris (the North Star), the only seemingly stationary star in the northern sky, and the Forbidden City's layout points its visitors straight at "Heaven".

Wooden architecture in the Forbidden City

The Forbidden City is the largest and most complete complex of ancient wooden structures in the world.

The main frames of all buildings were built with high-quality wooden beams and columns, including whole trunks of precious Phoebe zhennan wood from the jungles of southwest China.

See The 4 Reasons Why Most Traditional Chinese Architecture Was Wooden.

3. The Yellow and Red Color Scheme

Red and yellow are the main Forbidden City colors.

The main colors of the Forbidden City are yellow and red. The walls, pillars, doors, and windows were mostly painted in red, which is a regarded as a symbol of good fortune, and happiness in Chinese culture.

During the Ming and Qing dynasties, yellow was a symbol of supreme power and only used by the imperial family. If you climb up to the top of "Scenery Hill" in Jingshan Park and overlook the Forbidden City, you will see an expanse of yellow glazed tile roofs.

4. Mystical Animal Statuettes on the Roofs

Animal Statuettes on the Roof of the Hall of Supreme Harmony

There is a row of mystical animal statuettes placed along the ridge line of halls that were only for official use.

The animals, like dragons, phoenixes, and lions, have powerful meanings in Chinese culture.

The number of animals is different based on the importance of the buildings. You can see 10 animals on the Hall of Supreme Harmony, the most important structure in the Forbidden City, and seven on the Palace of Earthly Tranquility, the residence of the Empress.

In Chinese culture, the lion is the king of the animals, and is regarded as a symbol of power and strength.

Stone lions can be seen beside the entances of many Forbidden City halls.

Stone and bronze lions are popular as symbolic guardians, and can be seen beside the gates of many Forbidden City palace compounds.

The lions are always in pairs, with the female lion on the left and the male on the right. See more on China's Stone Lions — the Lowdown and Many Photos.

The Palace Museum in the Forbidden City holds more than a million rare and valuable works of art, a sixth of the total number of cultural relics in China.

For more, see The Top 10 Treasures in the Forbidden City.

A Panoramic View of the Forbidden City

The Forbidden City is a must-see attraction for visitors to Beijing. Visitors are limited to 80,000 a day. It is advisable to book well in advance.