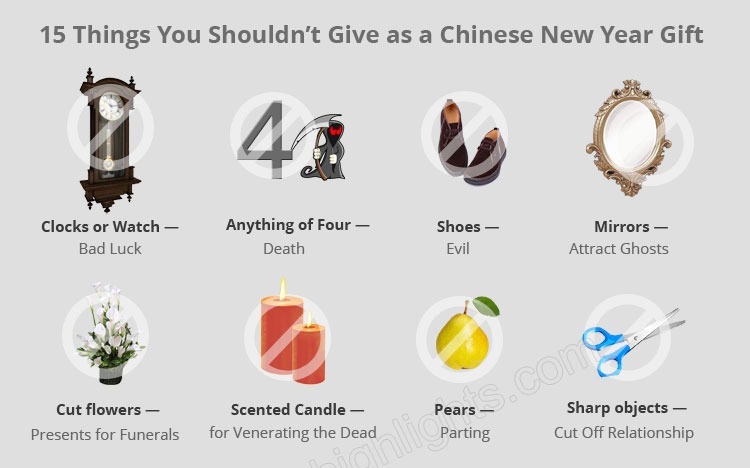 15 Gifts You Should Never Give as Chinese New Year Gifts

15. Necklaces, Ties, and Belts — Too Intimate

Don't give a necklace as a gift to a platonic friend. Chinese people think things like necklaces, ties, and belts are associated with intimate relations. These things are often given by boyfriends/girlfriends or couples.

In traditional Chinese culture, gifting a wallet symbolizes giving away all your money and you might lose all your finances and luck. However, it is no problem to gift a wallet to your spouse or other family member who already shares your financial accounts and money.

Umbrellas are a bad idea to give as gifts, because the Chinese word for 'umbrella' (伞 sǎn /san/) sound like the word for 'breaking up' (散 sàn). Giving somebody an umbrella may insinuate that you feel your relationship with them has fallen apart.

In China, when an old person dies, his/her children wear a mourning hat, called a 孝帽 (xiào mào). So,a hat is taboo to give as a gift for Chinese New Year. In Handan (a city in Hebei Province), on Chinese New Year's Eve, people throw old hats onto the streets in the hope of throwing away grief and troubles.

Green hats, in particular, are a big no-no. In China, the saying 'to wear a green hat'(戴绿帽子 dài lǜ màozi) implies infidelity of a wife or girlfriend. It is the greatest insult to a man if given a green hat as a gift.

Black and white are traditional colors for funerals, so avoid presents that are largely black or largely white, or wrapping paper or envelopes in these colors. Red, however, is believed to be a festive and fortunate color, so red is always a great option for envelopes or gifts.

Giving anything sharp, such as a knife or scissors, is bad luck, as it's thought to sever the relationship. A common Chinese saying goes "one slash and its in two parts" to mean the end of a relationship between people.

Giving fruit is a good thing, but pears are taboo. The Chinese word for 'pears' (梨 lí /lee/) sounds the same as the word for leaving or 'parting' (离 lí) and it is considered bad luck.

6. Scented Candles — for Venerating the Dead

Candles are usually used alongside offerings for the dead in China. Therefore, they cannot be given as gifts, whether they are flameless candles, scented candles, or ordinary candles.

Cut flowers are generally presents for funerals, so do not give them on Chinese New Year! This is especially so for Yellow Chrysanthemums and any white flowers, which represent death. White is an unlucky (funeral) color in Chinese culture, so white flowers should definitely be avoided.

Mirrors are a bad idea for gifts throughout much of Asia, as they are believed to attract malicious ghosts. On top of that, they are easily broken and breaking things is a bad omen.

Shoes are a bad idea for a present for Chinese New Year because the word for 'shoes' (鞋 xié /syeah/) sounds exactly like a word for bad luck or 'evil' (邪 xié). On top of that, shoes are something that you step on, and are thus seen as derogatory gifts. Avoid shoes at all costs.

In Chinese, the number four (四 sì /srr/) sounds similar to the word for death (死 sǐ). Therefore, anything displaying the number 4 is considered unlucky. Do not give gifts in sets or multiples of four… or any other number with the digit four in — 14, 24, 34, 40, 44, etc.

That is why there is no floor four or room numbers containing four in some buildings and hotels, for example. For more on lucky and unlucky numbers, see Lucky Numbers and Colors in Chinese Culture.

In Chinese, saying 'giving a clock' (送钟 sòng zhōng /song jong/) sounds exactly like the Chinese words for 'attending a funeral ritual' (送终 sòng zhōng) and thus it is bad luck to gift a clock or watch.

On top of that, clocks and watches also symbolize the running out of time. This is especially an uncomfortable reminder for seniors. Giving a clock or watch as a gift is the biggest no-no in Chinese culture.