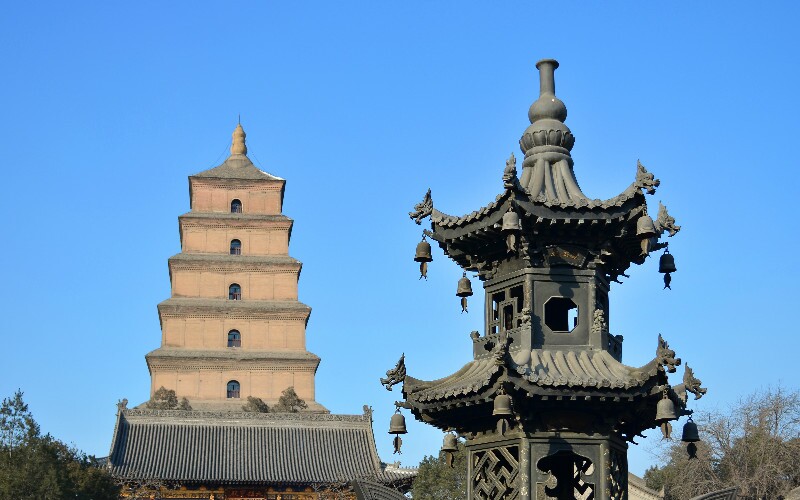 Situated in Da Ci'en (Great Kindness and Grace) Temple, about four kilometers from the urban center, Big Wild Goose Pagoda is one of the most famous Buddhist pagodas in China.

When and Why the Pagoda Was Built

The Pagoda was built in the Tang Dynasty (618-907) for the study of Buddhist scriptures. Although it has been attacked by centuries of weather, war and seismic activity, which destroyed most of the original material of the structure, a pagoda by this name and style still exists on the site.

The Tang regime gave orders to build a chamber for the translation of Buddhist scriptures in an effort to have the then widely renowned Master Xuanzang agree to be the head of the temple.

Xuanzang was a Buddhist monk who traveled to India, translated Sanskrit scriptures and developed theories of consciousness, karma and rebirth that were adopted by some later popular schools of Buddhism.

A pagoda was built on the site in 589 A.D. in the Sui Dynasty. It was called Wu Lou (Five Storey) Temple. It was not until 648 A.D. that Li Zhi, then still a crown prince, sponsored a renovation project on the temple in memory of his mother's kindness, after she suffered an early death.

The temple then assumed the present name: Temple of Kindness and Grace. When Li Zhi became the Tang Emperor Gaozong, he was said to pay homage to his mother twice a day by looking towards the temple from Hanyuan Palace, built in 663.

The temple once had 13 separate courtyards and contained 1,879 magnificent-looking rooms. It was a place of grand dimensions in the Tang Dynasty. However, it went into gradual decay after the dynasty's downfall. The halls and rooms that have survived to this day are structures that were built in the Ming Dynasty.

The History of the Pagoda

Big Wild Goose Pagoda was finished in 652 A.D. Its five stories were 60 meters in height. The decay of the earth-cored pagoda made necessary the new construction of a new 10-storey pagoda from 701 to 704 A.D.

However, the winds of war in the years to come, not to mention a massive earthquake in 1556, reduced the pagoda almost to ruins, which in turn resulted in the construction of a 7-storey, 64 meter-tall structure in the later Ming Dynasty, which still stands today.

The Feature of the Pagoda

The storeyed pagoda is an architectural marvel. It was built with layers of bricks without any cement. The bracket style used in traditional Chinese architecture was also used in the construction of the pagoda. The seams between each layer of bricks and the "prisms" on each side of the pagoda are clearly visible. The grand body of the pagoda with its solemn appearance, simple style and high structure, is indeed a good example of Chinese traditional architecture.

Covering about 110,000 square meters, the music fountain in the North Square of the Big Wild Goose Pagoda is the biggest one in Asia. The Fountain and Music Show has the most benches, the longest light-belt, and the largest-scale acoustic complex in the world.

Generally, the fountain contains 1360 sets of pumps, 1124 sets of transducers, 3300 sets of lampion and more than 2,000 sets of nozzles in all. Besides, it equips with high technological lighting system and professional audio systems.

What is most amazing is that the sound, the light, the water and the color of the fountain are harmoniously combined.

Big Wild Goose Pagoda is a historical site with a rich history and culture. It will be more interesting to visit it with a professional guide. We are more than happy to offer a guide service and to tailor-make a tour for you.

Here are the most popular tours including the pagoda for your reference: