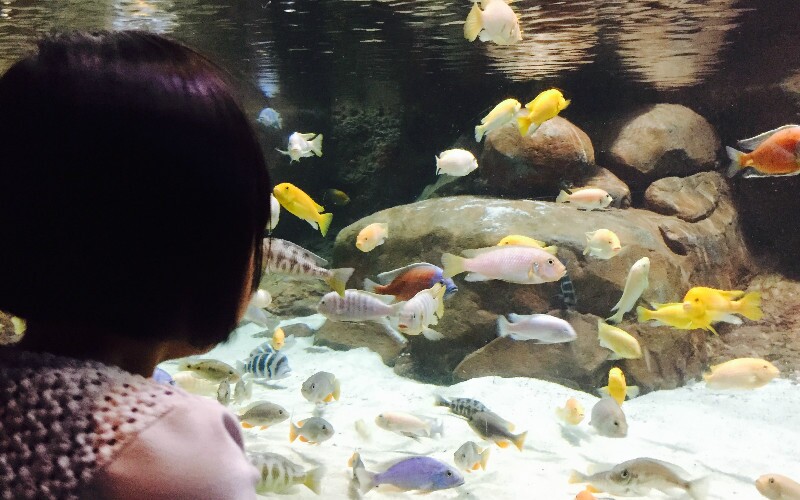 China has many places you can enjoy with your kids.

The world's biggest aquarium tank is now in Zhuhai. While China doesn't yet have the world's best ocean parks, it is beginning to compete, and Hong Kong's, Zhuhai's, and Shanghai's are certainly world class.

These top five ocean parks and aquariums are recommended additions to a China tour, especially if you are traveling with kids.

China's most popular theme park according to attendance receives about 7 and a half million visitors a year and ranks as the 13th most visited in the world. Young people in the region like going there for the rides and animals.

It's main attractions are the dolphin and sea mammal acts. It also has pandas. It has one of the world's largest aquarium domes with thousands of sea animals. It is on the other side of Victoria Peak from the main Hong Kong city urban area. Because it is so close to Hong Kong's major tourist places such as the Peak, Central, and Aberdeen and transport is convenient, it may continue to be more visited than Chimelong for several more years. It is a close tossup for China's best park. Ocean Park gets about 1.5 million more visitors annually and the marine acts are better. But Chimelong is catching up so rapidly it may soon surpass Ocean Park. Many tourists might prefer it because it is new and they already went to Ocean Park.

Chimelong Ocean Kingdom in Zhuhai is meant to rival the biggest marine theme parks in the world. It opened in 2014, but it is still under construction. It is already the 20th most visited theme park in the world with about six million visitors annually. It is the most popular place in Zhuhai according to TripAdvisor in 2016.

It is twice the size of Ocean Park in Hong Kong and has plush hotels and a lot of other facilities. It has one of the world's longest roller coasters. The main attractions are the marine animals and the aquariums.

The Whale Shark Exhibit tank features the world’s largest acrylic panel that is the largest aquarium window in the world (40 meters (130 feet) by 8 meters (27 feet)). The beats the Dubai Mall Aquarium (27 by 108 feet) and holds twice the water approximately. The Guinness Book ranks it as the biggest tank in the world (6 million US gallons) and bigger than the Georgia Aquarium. As of 2016, Shanghai Aquarium is recognized as having one of the world's ten biggest aquarium tanks. It holds 1 million gallons. It has an underwater tunnel that measures 155 meters or 509 feet that is the longest in the world at present. There is a moving walkway inside it, so you can just stand and be conveyed through underneath all the fish and sharks.

It is located near the Oriental Pearl TV Tower in Pudong New District of Shanghai. So transport there is convenient through the metro, and there are other big attractions in Pudong you can visit at the same time.

Foreign tourists like Beijing Aquarium. It is one of China's biggest aquariums with the most complete facilities. It is located at the back section of Beijing Zoo and is near the Beijing Exhibition Center and the Beijing Planetarium. It is rated as among the top 50 things to do in Beijing according to TripAdvisor in 2016.

To access the aquarium, you first have to enter the zoo (about 40 RMB ticket) and walk through the zoo and pay a separate entrance fee for the aquarium (about 150 RMB).

In one of the longest transparent underwater sea tunnels in Asia, a moving passageway leads tourists through the tunnel to get a closer look at various fish, sharks, and other creatures. A great number of aquatic species can be appreciated in it. The performances of divers feeding and interacting with the sharks is one of the highlights.

Tour China Your Way, with Ocean Worlds If You Want Ocean Park can be enjoyed during your Hong Kong trip

On your tour of China, we can help you visit these large sea worlds or aquariums or other theme parks. Beijing and Hong Kong are China's favorite foreign tourist areas with the top things to do in all of China according to TripAdvisor in 2016. These places are great for families, and here's our top family tour:

We can also help you plan a totally individual tour. Guides, drivers, and private vehicles can be provided for all the places you want to go. Just let us know your requirements.