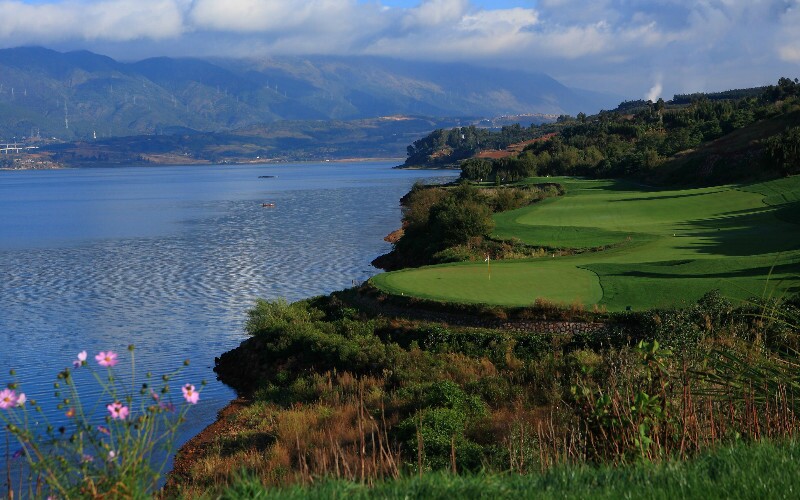 Golf is currently one of the fastest growing industries in China. Golf courses are being built at a startling pace. There are more than 400 golf courses in China and about 100 are under construction. The majority of golf courses are concentrated in the wealthy or temperate eastern and southern provinces, such as Guangdong, Hainan and Yunnan. Big cities like Beijing, Shanghai, Guangzhou and Shenzhen also boast many courses. China Highlights has listed for you golf courses considered to be the best in China. Contact us for a customized tour.

1. The Dunes at Shenzhou Peninsula

The Dunes at Shenzhou Peninsula was ranked the third place among Top 10 New International Golf Courses in 2010 by U.S Golf magazine. The magazine describes, "This gently contoured Tom Weiskopf design is built entirely on natural sand. Among the enticements are artfully sculpted bunkers and transition areas, boulder outcroppings and several memorable holes along the South China Sea, including the drivable par-4 15th and the rugged par-4 16th which hugs a wide, empty beach, with waves loudly lapping at the right side."

Kunming City boasts cool and temperate spring-like weather all year round. With a stunning lake view and mountain backdrop, Spring City Golf and Lake Resort is a premier integrated golf resort consists of luxury villas and two championship golf courses (mountain course and lake course). Both courses have received over 80 world class awards in the past decade, and is a venue for several major tournaments and corporate meetings. US Golf Digest awarded the Lake Course as "100 Best Golf Courses outside the United States".

Mission Hills China is China's top rated golf and leisure resort, and the world’s largest golf club according to the Guinness World Records in 2004. It is also the host, promoter and underwriter of several major golf tournaments, including the Omega Mission Hills World Cup from 2007 to 2009, and Asian Amateur Championship. It now has 12 courses, each designed by a different top golf player in the world, including Jack Nicklaus, Greg Norman and David Leadbetter.

Also known as Dalian Golden Pebble Beach Golf Club, it is China’s first waterfront golf course is located on the picturesque and dramatic peninsular coast line of Dalian near Huanghai Sea. With beautiful natural coastal landscape, excellent design and unique hill features, Jinshi Golf Club was listed into the world's top ten courses and seven paths were listed into world top 100 paths in the second year after its opening

It is located at Ganhaizi at the foot of the stunning Jade Dragon Snow Mountain near Lijiang ancient town. It is one of the most unique golf courses in China with location near snow mountain and ethnic villages. The golf course is situated at 3100 meters above sea level, and was designed with 18 holes; with par 72 spreading 8,548 yards in length - a new world record. The weather at the golf course is moderate and pleasant for all seasons.

Sheshan International Golf Club is Shanghai's first and most exclusive private golf club. The club boasts a world-class championship course and clubhouse. Since 2006 the course hosts the annual WGC-HSBC Champions, which is a World Golf Championship event. Asian Golf Monthly 2008 Awards named it the Best Maintained Course in Asia, Best Championship Course in Asia and Best Clubhouse in Asia.

The large Scottish style golf club is back-dropped by a lush rolling mountain range with trees scattered around. It is surrounded by Dragon Lake. The combination of the picturesque landscape and a golf course fully immersed with the natural environment provides a perfect escape from the city hustle and bustle while allowing you to swing to your heart's content.