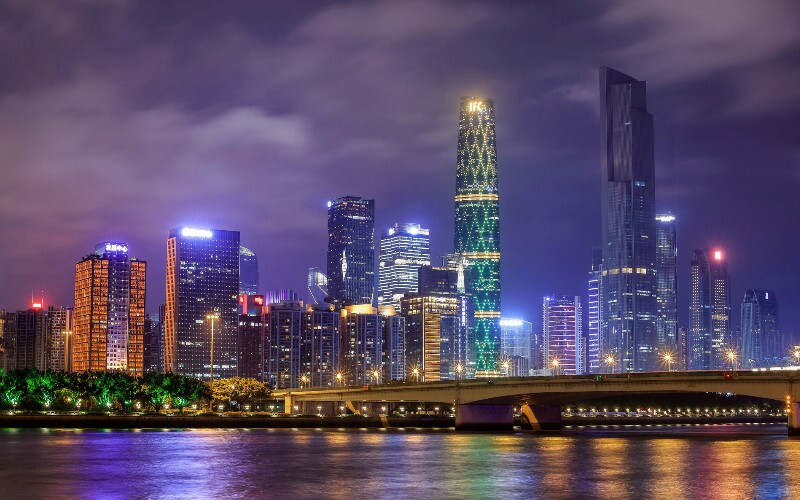 Guangzhou (pronounced /gwung-jo/) is the capital city of Guangdong Province in southeast China. A major South China Sea port, it is China's southern gateway to the world as well as a hub city of the Belt and Road Initiative.

Besides being a key city for world trade, more and more tourists are going to Guangzhou to enjoy new attractions, old museums/temples, and its mild climate. Its huge Chimelong Amusement/Wildlife Park is now China's number 1 theme park.

Guangzhou is the largest city in the world’s largest conurbation (the Pearl River Delta: pop. 65 million). A leading commercial and industrial city, it has 11 districts under its jurisdiction with a total area of 7,434 square km (2,870 sq mi). At the end of 2019, the population of the city's administrative area was estimated at 15,300,000.

Once known as Canton, Guangzhou was the only Chinese port accessible to foreign traders between 1760 and 1842 in the Qing Dynasty. It rose to prominence first as a trade port, then as a manufacturing base. More recently, business people by the hundreds of thousands have come for the biannual Canton Fair (China’s largest trade fair), increasingly touring the city sites such as the Canton Tower.

3 Things Guangzhou Is Famous For

Guangzhou is the largest and most flourishing trade center in south China. It has huge clothing markets, which are mainly wholesale, but you can also find retail bargains. The best buys include clothing, cosmetics, electrical appliances, and digital products as well as characteristic handicrafts and Chinese tea.

Guangzhou is a "shopping paradise", you can find almost everything you want to buy, as well as have an enjoyable time, check out some best shopping places in Guangzhou.

Steamed fish with slivers of ginger is an example of a mild and delicious traditional dish.

Cantonese cuisine is one of the "eight great styles of Chinese cuisine", of which Guangzhou cuisine, Chaozhou cuisine, and Hakka cuisine are the main sub-cuisines. It has the characteristics of clearness, freshness, coolness, tenderness, and smoothness. Read more on Guangzhou Food.

Cantonese cuisine is possibly as famous as French cuisine across the world. Due to the large number of overseas Chinese from Guangdong, it is the style of Chinese food served in most Chinese restaurants around the world. Check out our propoular Cantonese food tour in Foshan and Shunde.

Guangzhou is the country's largest commodity manufacturing city, so it is appropriate that China's largest commodities trade fair is held there. The Canton fair is held in April/May and October/November each year and attracts hundreds of thousands of people from all over the world. It is honored as "China's Number One Exhibition". For details, see China's Biggest Trade Fairs.

The recommended tour: 4-Day Essence of Guangzhou and Shenzhen Tour

Is Guangzhou Safe for Travel?

Guangzhou is a busy trade center with hundreds of thousands of visitors from all over the world (pre-COVID-19), and it is perhaps China’s most multi-national city. Though this makes it more complex to control than other cities in China, in comparison with cities of a similar size in the world, the safety of Guangzhou must be among the top.

China is a country with strict gun controls and penalties for crime, and, now CCTV is everywhere on the streets, crime has decreased even more. Though pickpocketing and theft can still happen occasionally, Guangzhou is a heaven for tourists in terms of general safety.

Guangzhou Accessibility and Restrictions for Visitors

Guangzhou is conditionally open and can be visited [March 2021]. If you are planning a trip to Guangzhou and want to know more details, please contact us.

What Languages Are Spoken in Guangzhou?

Cantonese is the main language spoken in Guangzhou. Most of its residents speak Cantonese. Small numbers speak the Chaoshan and Hakka dialects. However, in recent decades, with large numbers of migrants settling and increasing nationalization, Mandarin has become more and more popular in Guangzhou.

English is the “first foreign language” and a required core subject in China's schools and universities, so young people should be able to communicate in simple English.

Guangzhou has a humid subtropical climate with plenty of sunshine and rainfall and no snow. Summers are long, humid, and hot, and winters are short, mild, and sunny.

From May to October daytime temperatures often exceed 30°C (86°F). Even in the coolest time, from December to February, the temperature still climbs to around 20°C (68°F) and seldom drops under 10°C (50°F) at night.

The best time to visit Guangzhou is autumn and winter, from October till March of the next year, as temperatures are mild, and rainfall is lower. Check out more details on Guangzhou Weather, clothing and travel tips, as well as the recommneded tours in Guangzhou.

Guangzhou is the top transportation hub of southern China and has very convenient transport systems. Guangzhou Baiyun International Airport flights reach out to over 40 countries as well as to all parts of China. Its railway (particularly high-speed trains), highway, water transportation, and city transportation systems are also well developed. Most tourists prefer to use the city's several big bullet train stations for domestic travel.

Guangzhou is 144-hour-visa-free for transit via Baiyun Airport. This permits you to travel around all of Guangdong Province including Shenzhen, contact us for a layover tour in Guangzhou.

6 Top Things to Do in Guangzhou

Whether seeing them from the outside or going inside, these two skyscrapers are big attractions and a witness to the development of Guangzhou.

The Canton Tower (ranked #1 in TripAdvisor 2019), China's tallest tower and world's second tallest tower, has an observation deck, a skywalk, and a Ferris wheel on top of the tower. The Canton Tower is 70 meters taller than the new CTF Finance Centre located nearby, which is the world's eighth tallest building (2019).

Museums and old architecture areas in Guangzhou are the best places to learn about the history and stories of the city.

The Chen Family Ancestral Temple is a concentration of ancient Chinese architecture, carvings, and paintings, as well as a museum of folk handicrafts. Also visit the Sun Yat-sen Memorial Hall and the Temple of the Six Banyan Trees.

Guangzhou’s colonial history has brought colorful overseas cultures to Guangzhou, and they have merged with the local culture. Guangzhou preserves historical buildings and old streets in the traditional Chinese style, but you can also find a series of well-designed British and French architectures in Shamian Island.

If you love religious culture or are interested in different religions, besides visiting Buddhist temples, Sacred Heart Cathedral and Huaisheng Mosque represent Guangzhou’s oldest Christian and Muslim places of worship.

4. Have Fun in the Chimelong Theme Parks

The Chimelong theme parks are not quite as world-class as Hong Kong's Ocean Park and Disneyland, but they have still won high acclaim. The theme park cluster includes:

The city parks are wonderful places to relax within the city. You might enjoy visiting Yuexiu Park in the early morning where you can see local people exercising amid the beautiful scenery. Also, check out the statue of five goats in the park, which is the symbol of the city of Guangzhou.

Guangzhou provides interesting activities to do at night such as taking a night cruise on the Pearl River and enjoying a Cantonese opera. Bars and clubs are all over the city. Read more on Guangzhou Nightlife.

See the best of Guangzhou with our Guangzhou Tours.

As Guangzhou is an international metropolis, the accommodation costs are generally higher than in more provincial areas, however visitors can select from a huge range of options: from high-grade star hotels to all kinds of chain hotels, youth hostels, etc.

The high-end hotels include many internationally famous 5-star or even “super-5-star” hotel brands, e.g. The Ritz-Carlton and Four Seasons Hotel. Most of these hotels are located in the most prosperous business districts of Guangzhou: Tianhe and Haizhu. These hotels’ management level and service quality maintain a leading position in China.

In recent years, various budget chain hotels have developed rapidly in Guangzhou. Among them, Home Inns, Hanting, Motel, Jinjiang Star, and 7 Days are all well-known hotel brands in China, with moderate rates (standard rooms are usually under 300 yuan). They offer comfortable and safe stays and are widely distributed across Guangzhou’s districts.

The best place to stay in Guangzhou depends on who you are and why you’re visiting:

See more on The Top 6 Areas for a Stay in Guangzhou.

If you would like to explore Guangzhou and discover more about it, it would be useful to have a professional English-speaking tour guide. We can help you with that and much more. Everything can be customized to your needs.

As the biggest traffic hub in south China, it is easy to take flights and trains to all parts of China from Guangzhou. Here are some of our tour packages starting from Guangzhou: